We are continuing our series of articles dedicated to the clothing traditions of the Cherokee people, one of the famous Native American tribes. And it’s time to talk about the appearance and spread of such important crafts as spinning, weaving, and beading. The early-mid-19th century is the period when Cherokee women got their hands on spinning wheels, cards, weaving looms, and other similar tools. And they loved to use them. Very soon, the Cherokees were producing such gorgeous articles of clothing that no European pieces could compare.

During this period, the Indian agents visited and lived among the Cherokees and encouraged agriculture and spinning&weaving. These agents delivered spinning wheels and cards to comb the wool.

The Cherokees have been weavers for a long time. They wove cane mats to hang as wallpaper in their homes. They slept on cane mats. They had baskets woven, bread trays, sifters, etc. They were weavers from the beginning, so when the Europeans brought spinning wheels, looms, and sheep, it was natural. And they immediately began to weave their own fabric.

The Moravians were the first missionaries that came to the Cherokees in 1799-1800. They influenced the Cherokee women to dress like they did. Although very slow to change, the Cherokee fashion did turn to covering the body with long full skirts and modest shirts and bodices. Also, students were taught the staples of weaving cloth and sewing garments and bedding, including quilts.

Cherokee men were hunting, they were gone for a long time (3-5 months), and meanwhile, their women spun and wove so much fabric that they traded it for cattle.

Also, the time period from 1800 to 1835 was the heyday for beadwork. And Cherokee beading is just wonderful. The bandolier bag became fashionable at this time. It was typically red or blue, lined with cotton, and the wool fabric is a part of the pattern. The strap is never fully beaded. There are always typically curvilinear designs or things that had significance to the Cherokees. Another feature is a triangular-pointed flap on the outside of the bag. And typically, there were two different types of patterns on each of the straps.

Here are a few samples of some of the beadwork that Cherokee women did. 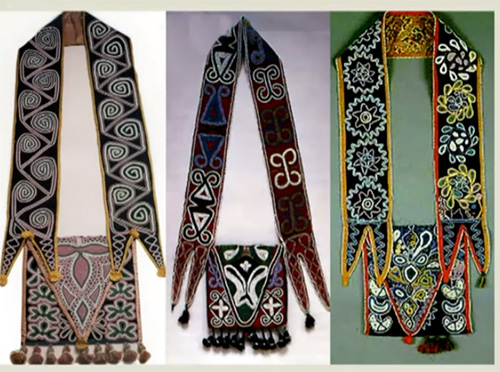 The Cherokees were not the only ethnic group to practice beading – all of their neighboring 5 tribes did it as well.

Cherokee sashes were worn across the chest and tied at the hip. Again, typically red or blue wool was used. They were almost always beaded with white beads and with the same double-spiral design. This pattern emulates one of the ceremonial dances, where people dance away from the fire and come back to the fire – it's the double spiral.

In this sash, you can see a bead stitch specific to Cherokees. On the edge of the double spiral, you can sort of see this little lacy edge to this spiral. It is where a bead stands vertically and the next one lays horizontally, a bead stands and a bead lays. It's very unique and very appealing. 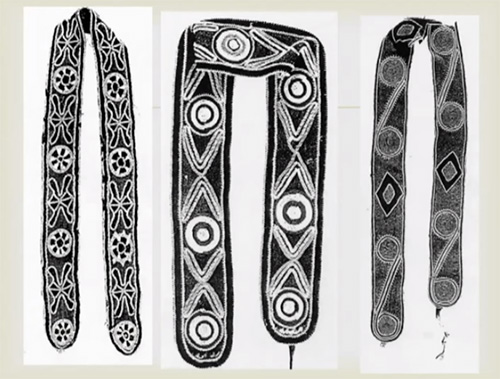 In general, Cherokee belts were typically made of wool or finger-woven. Red and blue colors were the most popular. They were beaded in any color and, by the way, the designs could have been family patterns. The streamers on the belt were very long so that the belt went around and then it doubled back around and tied in the front. At the time, the Cherokees didn't have pockets in their garments, so belts were used as pockets to hold knives, tobacco pouches, or anything useful.

Here is a particularly beautiful beaded belt. And you can see that the beads are woven into the streamers. Those streamers are finger-woven and the beads are added to the edges. 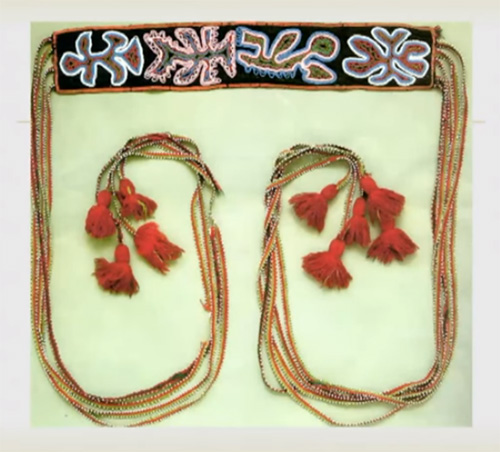 They were made from homespun cloth, many were striped. They were made to be held together with a belt or sash, and the early jackets had no pockets. They were fashioned from the hunting frock. Also, they could have had a large collar or cape.

Here is a particularly beautiful picture of David Vann, Cherokee sub-Chief. You can see he has on a sash across his chest. He also has a finger-woven belt around his waist. But the hunting jacket is draped off the shoulder, like many people wore them. Sometimes it's known as the “Sequoia coat”. 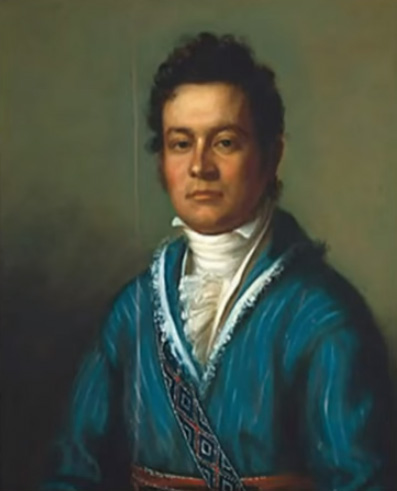 So, to summarize a bit, 1800-1840 were the years when the Cherokee people started mastering such clothing crafts as spinning the yarn, weaving the cloth, and beading the clothes. And they soon became very skilled and talented artisans. We still have many samples of Cherokee clothing and accessories produced at this period, which are preserved in museums and by the tribe members.