Different neighboring Native American tribes had, for the most part, similar traditional costumes until the mid-17th century. That’s because local people dressed to the climate – it wasn't a fashion statement at all. But, of course, various ethnic groups had their individual peculiarities in clothing. Let’s learn a bit about the aboriginal dress of Cherokee tribe before 1650. We don’t have that much information from this period because lots of Native American Indians were exterminated, along with their traditions, beliefs, handicrafts, etc. But still, their ancestors study what they can about their national outfits.

All clothing was made from either animal or plant fibers.

Hide tanning and weaving were the most common clothing production techniques.

Men typically wore deerskin breechcloth, which was consistently worn for centuries. Cherokee was not the only tribe to do that – many indigenous people used the breechcloth. It's probably the most inventive item of clothing for any race, with the exception of the Arctic people from Alaska who made waterproof rain jackets from seal intestine casings. How innovative is that!

The breechcloth is a pretty simple kind of thing. It's just a long strand of deerskin. It’s worn under the crotch, it's belted on each side, and the flaps hang to cover the essentials.

Cherokee men also wore leggings – deerskin, often painted with decorations – and mantles or matchcoats, which were worn over one shoulder. They were made of animal hides and often a lot of small skins were sewn together.

Deerskin leggings usually came up about a handbreadth above the knee and they have a single string, which is worn up the side and tied on to the belt. Belts were typically made of snakeskin or eel skin.

Here's a picture of the leggings. 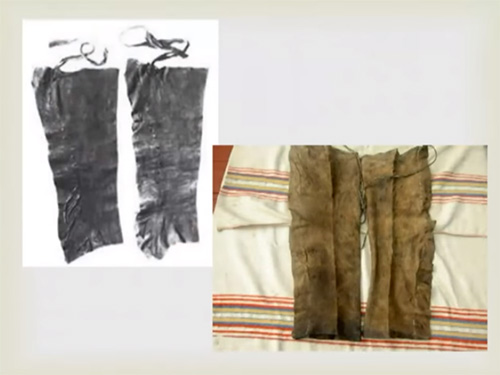 Women wore wrap-around skirts that lapped in the front and reached just a little bit above the knee. That gives you every opportunity to sit, stand, run; it's non-binding, it's non-restrictive, and was the perfect garment.

Cherokee females were topless (males, too). Cherokees had no concept of shirt or dress until someone brought that to them.

Sometimes the deerskin garments were fringed and decorated with paint. When they did use fringe, they used very short (about 1inch-length fringe). It is said that it helps repel rain and trickle rain off, but it was stylish, too.

Occasionally, people wore a moss garment fastened at the shoulder. But such clothing articles were worn in the south areas because Cherokees didn't have plentiful of moss in their homeland. Though, some women did wear a moss garment. It was usually over one shoulder, exposing one breast, and covered the midriff. If it was very cold, they would wear two – one on each side.

Here's a photograph of a wrap skirt. Perhaps, someone was trying to recreate the mulberry cloth. The mulberry cloth was something like linen. It was made from the interior of the mulberry tree bark. The fibers were pulled, rolled, and then woven together to make these skirts. 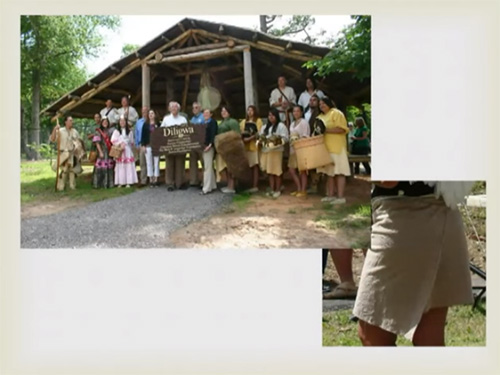 Here is a picture from Von Reck’s Journal, 1731. These are the Yuchi people, which were very close to Cherokees, in the same region. So, they probably dress the same way because all tribes, no matter where their location, dressed to the climate. It wasn't fashion statement at all, it was comfort to the climate. 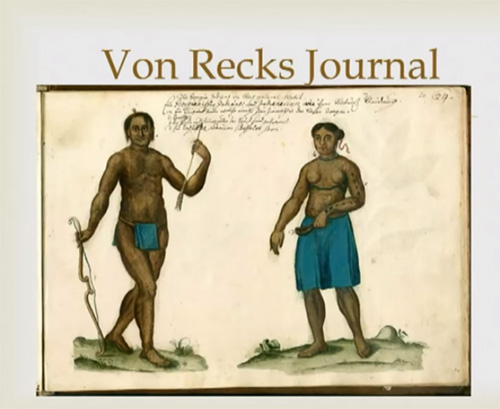 Mantles were made from animal skins with the hair left on. Big animals – bison and deer – were used as whole garments, smaller animals were pieced together to make larger mantles.

The fur was worn on the inside when it was very cold.

Mantles were worn by both men and women, and they were also used as bed covers.

Here's a picture of a mantle. This drawing was done in 1735. 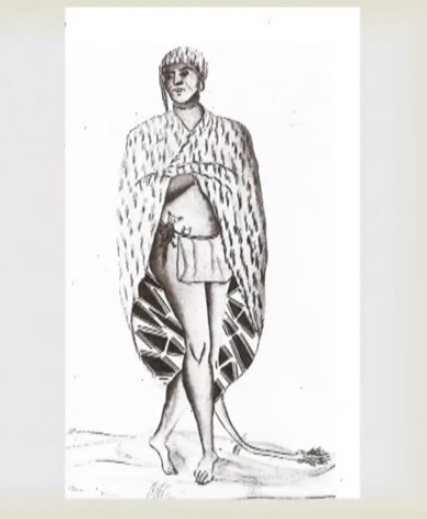 It's bison skin with the hair left on the outside and painted geometrically on the inside. You can see the keen little tail still hanging on the garment. And he's got a fashionable cap. Caps were very common and, throughout the 1700s, you read about men wearing yellow cat caps and different kinds of things. So, wearing headgear or something to keep the head warm was very common.

Also, there’s one curious item on this man’s belt. It looks like a little dead mouse under his drawstring. More than likely, it is a small ermine or some other tiny animal, which was used for tobacco pouches or storage pouches.

Here's another picture from Von Reck’s Journal. You can see a man in leggings, a breechcloth, and a bison hide. The bison hide is worn around the shoulders, he's holding it there. He has typical tattooing of the day. And the woman has on a duffle, which we know is a blanket. It was a heavy woven blanket that was used for trade. 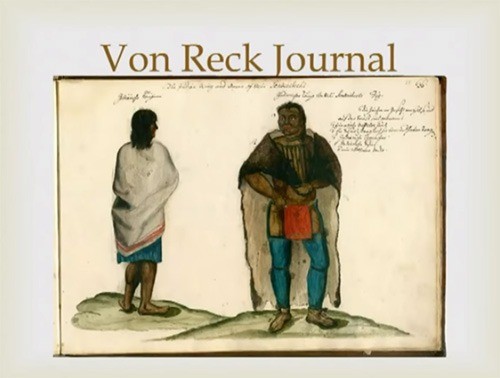 Men and women wore them. The most common feather was turkey. Colorful feathers were also used, like red flamingo feathers. And they were often made into patterns onto the capes. Women of the honored class wore swan or Indian duck feathers.

This particular picture shows a man wearing a longer cape. The chief’s capes were full-length. The war chief had a red cape and the peace chief had a white cape.

The women's cape was elbow-length.

These feather capes are very difficult to make. It takes 600-800 feathers to make a cape. The quill of each feather is moistened, turned, and tied so that there's a loop onto the feather. And then the feathers are sewn feather by feather onto each of the knots of the cape. Cherokees were expert netters, they used nets for fishing and, probably, for carrying items and big things. 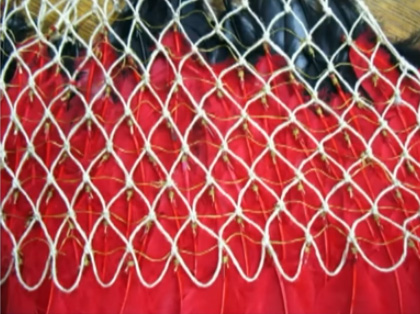 Here's a photograph. This is by Robert Griffin. He is an artist who has done several really spot-on paintings of the southeastern tribal people. This particular man has a nose septum, which was very common, to pierce the nose. Earrings were also very popular among men.

He has trade silver on. His hairstyle is probably spot-on. Men plucked their hair – all their body hair for that matter – and either left a scalp lock on the back or they would use a crest or a comb – today we call it a “mohawk”.

Women never cut their hair. Women's hair often fell to the ground. And in order to be able to manage it, they would club it, which means they would pull it back and tie it up with a ribbon or a leather thong.

The moccasins were often adorned with beadwork done on wool. And while shoes would wear out very quickly, the wool would still be fine. So, people took the beaded piece off and put it on another pair of moccasins.

These are today's Cherokee moccasins. The toe is puckered and the seam of the center is puckered and pulled to fit the foot. Very often, there would be a string or a tie around the back of the ankle to hold it on, and there was also a tie that came under the arch of the foot, tied on top to help hold the moccasin on. 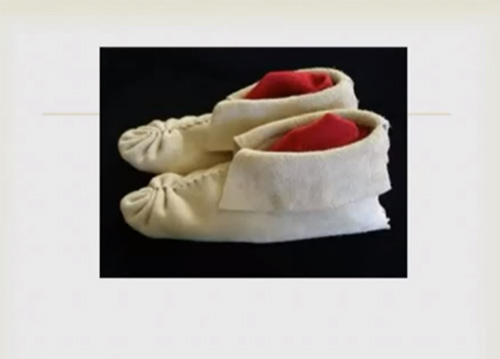 Sometimes, they added a sole, a rawhide sole.

#3 Sharon Thom 2021-10-13 17:12
Looking for the name of the ceremony attached to a female headdress made from small bones and maybe seeds made into beads and some kind of animal hide thread. No feathers but it covers the head and hangs down around it like a wig. Very old, was passed from Grandmother to Granddaughter probably over 300 years old.
Quote
#2 Sofia 2021-09-17 08:26
Quoting Kathleen Bianch:

My daughter's father was 1/4 Cherokee, and I purchased an indian 12" doll that i'd like to make clothes for. Do you have better images for that kind of clothing. I am a beader and would like to use that medium as well.
Thank you for your response.

Hi Kathleen. At the end of this post, is a link to a youtube channel Cherokee Nation, the original source of this info. I think you can contact them and they'll be able to help you a lot with your request. Much more than we can.
Also, you can contact Tonia Hogner Weavel, a Cherokee artisan, in facebook.
Good luck with your work)). And thanks for your comment
Quote
#1 Kathleen Bianch 2021-09-16 20:33
My daughter's father was 1/4 Cherokee, and I purchased an indian 12" doll that i'd like to make clothes for. Do you have better images for that kind of clothing. I am a beader and would like to use that medium as well.
Thank you for your response.
Quote
Refresh comments list