We’ve already published an article about Cherokee folk clothes from the early historical period (until 1650). This is the next material of a series and it will tell you about the traditional Cherokee dress during the so-called Trade Era (1650-1800). How did local garments change and why? What outfits remained the same? And was Cherokee-European partnership good for the Native American Indians at this stage? Also, let’s see the traditional Cherokee hairstyles, jewels, tattoos, and other body adornments.

This was a trade era. And it really did change the life of Cherokee people, it changed the economy, the way of life. The influence of the Europeans was huge.

Cherokee used to trade with other tribes before. But the Spanish and the European involved Cherokees into a whole new world of trade. At first, they brought gifts (glass beads, brass bells, iron chisels and wedges, etc.) to help ease the introduction into a new society. And soon that friendly trade became commerce.

Clothing was one of the items for trade, among other very important stuff, like guns, iron tools, jewels, etc.

In the 18th century, the Native American tribes were introduced to the shirt, which was very different for them.

Cherokee still wore deerskin leggings because they lasted far longer than wool pants ever could. They began to wear deerskin and woolen breechcloth. Wool was a huge trade item. They preferred blue and red wool, although they did also trade for green and black.

They were still wearing skin and woolen mantles, feather mantles, and deerskin moccasins. So, not everything changed.

Here's a picture of a Yuchi man that Von Reck painted in 1736. You can see he has on his leggings – they’re, probably, dyed deerskin but they could be wool. He has the string that runs up his hip to his waist. And he has on a trade shirt. 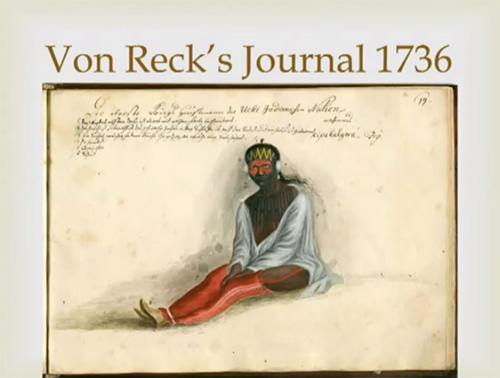 Before the 1700s, women wore deerskin wrap skirts. When they got wool, they started making their skirts out of wool. But they wrapped them around, just like their deerskin skirts.

Women began to wear trade shirts with feather capes, use blankets as coats, and wear moccasins.

Here is a picture of a trade shirt. The trade shirts are really simple. It's a long strip of fabric with a hole cut in the middle, two sleeves sewn on each side, and then the sleeve and the bodice of the shirt are sewn together.

Special gussets were used to attach the sleeve to the body of the shirt, under the armpit. Such inserts give you a full range of motion.

So, Cherokee women wore trade shirts, but also chemise shirts or peasant blouses (with a scoop neck, a drawstring that helped pull it tight, and little cap sleeves).

This is what a Cherokee women were wearing in the 1700s. The picture on the right is from the North Carolina Emissaries of Peace exhibit. The shirt is very simple. It has a ruffled collar and the sleeves are gathered with a ribbon. This is a wool skirt adorned with lots of ribbons and with beads. It also has leggings. 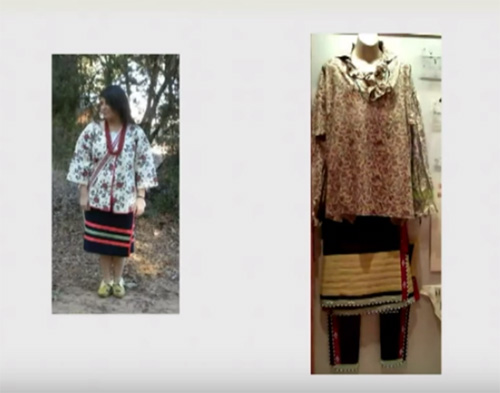 The lady on the left is probably wearing exactly what a Cherokee women would have been wearing from about 1750 forward. She’s wearing a female waistcoat. It is very loose and is made on a square. It was used not just by Cherokee women, but European and American women also wore this style of jacket. She has on a wool wrap skirt, decorated with a silk ribbon (China exported silk to Europe, who re-exported it to America).

So, Native American tribes used silk fabrics. Not only women – men draped them around their shoulders and their waist.

Here is some funny info about breechcloth. Wool for the breechcloths was made in Stroudwater, England. They would clamp the wool to these big boards and then drop the woven piece of wool into a vat to dye it. When it came out of the vat, they would take the boards off, and where the board's had clamped the wool, there was this wonderful zig-zag pattern on each of the selvage edges of the wool. Cherokees loved it, they used it as decoration. The length of the wool was perfect for the length of a breechcloth. It’s a pity but you can't find Stroud cloth today. And even if you found it, it would cost about $100 a meter.

In the 1700s, Cherokee began to use center-seamed leggings. This garment was straight from the frontier and a little military in nature. Here is a modern pair. You can see that their shape would fit over the moccasin and fit down to the foot. They would button all the way down. And such leggings were beaded and decorated. 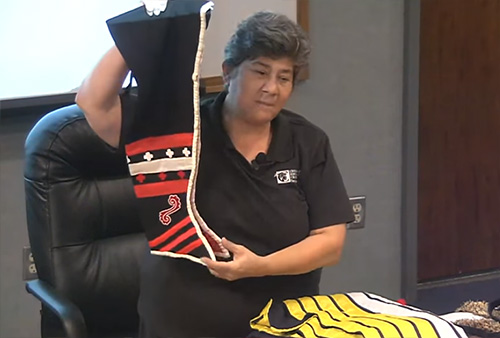 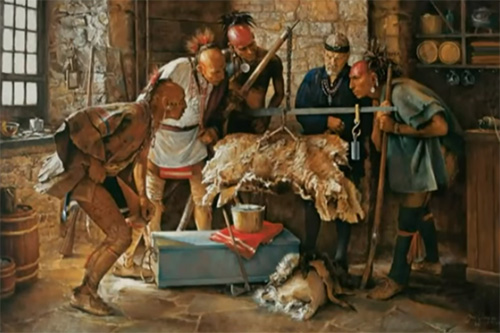 Another item that Cherokee loved were gorgets. These are metal pieces of armor worn as a military embellishment. The gorget is not new to Cherokee people, they had shell gorgets they wore hundreds of years before brass, silver, and gold gorgets came to be.

The history of a gorget is very interesting. It was the last piece of armor worn when armor was the military uniform in France. It was that piece right under the helmet, around the neck. Later, they kept that piece and began to make their military uniforms with buttons where the gorget originally was. And then, insignia was placed on the gorget to indicate rank. When the French came to America, they had Indian guides and allies, and in order to distinguish them, the French gave them gorgets. So the gorget era really grew and there were lots of different kinds of gorgets.

Male ear lobes were split, stretched, and bound with leather. After they healed, they were very elastic and Indian men would wrap copper and brass wire around the cartilage of the ear. So the ears were kind of springy and would bounce when the man moved. Also, Cherokee often decorated their ears with heron feathers.

Here's the picture of the cartilage that was cut and wrapped. He has those bells on that would jingle when he moves. 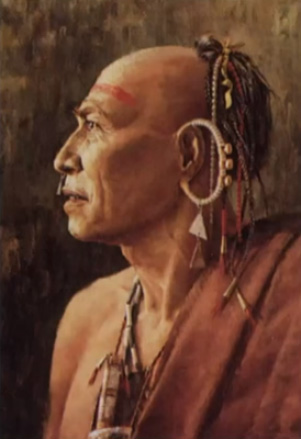 Tattoos were very common. Head, neck, breasts, arms, and legs were tattooed with depictions of scrolls, flowers, figures of animals, stars, crescents, and the Sun, etc. The skin was pricked and a bluish tint was rubbed in.

Here's another picture by Robert Griffin. The men are wearing Native American mantles. You can see how elegant they are, especially the one with the ribbon decoration. Ribbon often could mean status or rank or wealth. They also have silver armbands. 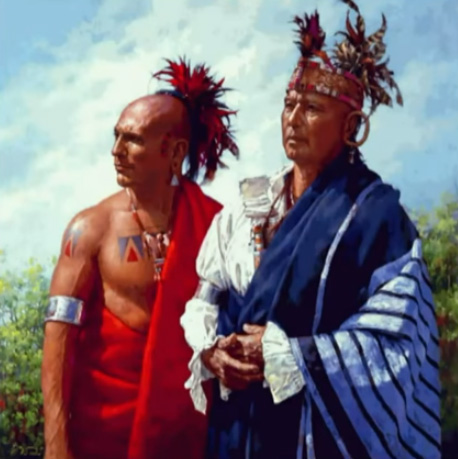 This is another picture by Robert Griffin. There's a tattoo on the man’s neck of a cross. The crosses with equal rays or arms are significant of the four directions, the fire, and of balance. It is a very well-used representation for Cherokee culture. Also, you can see a gorget on his neck. 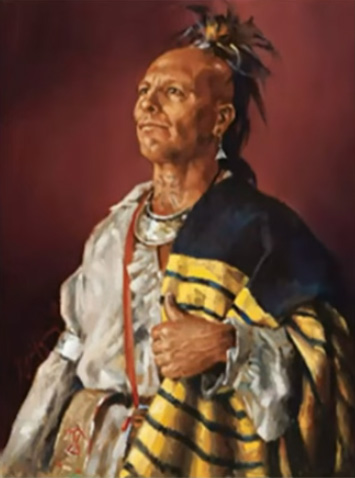 No one knows if it was a fashion statement or if this garment was used for convenience, but about this time, Cherokee started using silk and rags and other kinds of headgear to cover the head. The local men liked their hair and had decorations around their head.

It was popular to use a turban. Again, there is no definite knowledge about how it got into fashion. But there are a few theories. Some people say that when the Native American chiefs went to Europe, they had tattoos on their heads and fierce hairdos, so they were scary and Europeans gave them turbans to wrap their head.

Another theory tells that as Indians had big ears that flapped when they were going to play stickball or going to war, they would wear a headpiece to hold the ears down and protect them.

Maybe that's where the turban came from. But the fact is, Cherokees wore turbans and other headdresses.

#1 Makenna Smith 2020-11-11 17:53
Where could I find the author of this article's name? I would like to use this for a research paper, but I would need the author or contributor's name. Thank you.
Quote
Refresh comments list