At all times, people loved to wear something comfy and casual at home, when only their family was around. And in the 18th century, they usually dressed very formally, in complicated multilayered clothing both in daily life and for special occasions. So, 18th-century ladies and gentlemen needed something much more comfortable for home use so that they could relax and rest from all those formal outfits. And if women had a large variety of such garments, men weren’t as lucky. Thus, this particular item of clothes – a banyan – was a real find.

A banyan, also called robe de chambre, morning gown, and nightgown (but note that a banyan was never worn to bed, it’s only called a “nightgown”, but a man dressed in it when he got out of bed or before going to bed) was a very cozy and casual loose robe worn at home by men and women. Although it was more popular among gentlemen – practically every middle-class and high-class man owned a banyan. 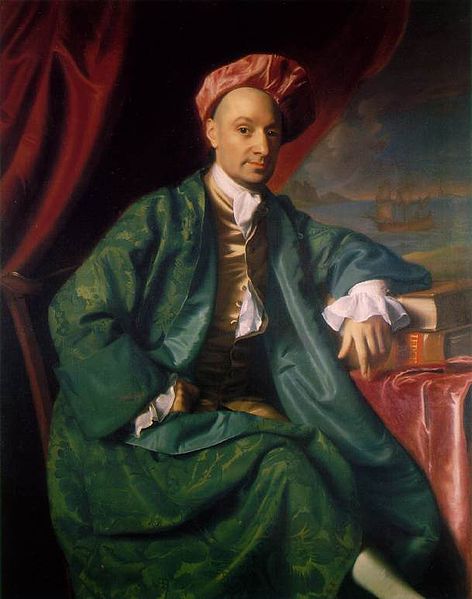 Portrait of Nicolas Boylston by John Singleton Copley, 1767. He’s wearing a banyan and a turban-like cap

This robe was cut like a Japanese kimono – wide, loose, T-shaped, with the sleeves and body cut as one piece. It was typically sewn from cotton, silk, or linen but also sometimes from wool, damask, brocade, plaid, and other fancy fabrics.

This garment appeared in the late 17th century and was widespread in Europe and America throughout the 18th century. Basically, a banyan was a fashionable dressing gown, inspired by Oriental clothing brought to Europe from Asia in the late 1600s.

There was an alternative design of a banyan – cut like a fitted coat, with set-in sleeves, and closed with buttons.

Men’s fitted, double-breasted banyan with cuffed, two-piece set-in sleeves and mandarin collar, 1750-1760. it is made from lovely Chinese silk

Of course, even at home, a banyan wasn’t worn over the naked body, men had a shirt and breeches underneath and women had underpinning beneath their banyan.

There were also banyans that could be worn outside, as streetwear. They were used mostly in American hot and humid states.

18Th-century men added a soft turban-like cap to top the attire. Compared to a usual everyday periwig, this cap was very casual and laid-back. But it was handy because it protected the head (used to the warmth of a wig) from cold drafts.

We can see a wide variety of original banyans in the 18th-century portraits – and that’s great. This was a popular trend among men – to be painted wearing casual banyans sitting in their cozy libraries. This look was considered to be intellectual and philosophical. Such portraits are a wonderful source of the robe de chambre designs and can show us a lot about this fine piece of gentlemen’s clothing.