Kayan people with their neck rings look bizarre but it’s their heritage. Do you agree?

The women of Kayan tribes have an odd and even dangerous tradition to lengthen their necks with special brass neck rings. They’ve been doing it for centuries. That’s how these women identify themselves – by their attire, jewelry, and this eye-catching physiological peculiarity. The outsiders have different attitudes to this unusual tradition, but one thing truly is a fact – Kayan women’s necks attract attention and are unique on this planet.

The Kayan people are an Asian ethnic group. Originally, they’re from Myanmar, but they live in Myanmar, Thailand, Vietnam, and the USA today. The population of Kayan people is around 130,000.

One of the most interesting things about the Kayan ethnic group is their tradition to visually lengthen their women’s necks using special jewels. When a Kayan girl turns 5 years old, her parents put the first ring on her neck. More and more coils are added over the years. On children, you can’t really see the difference in their physiology, but adult women have rather pronounced long necks. Though actually, their necks don’t become longer, it’s the rib cage that becomes compressed and deformed because of the massive brass neck ring jewelry. 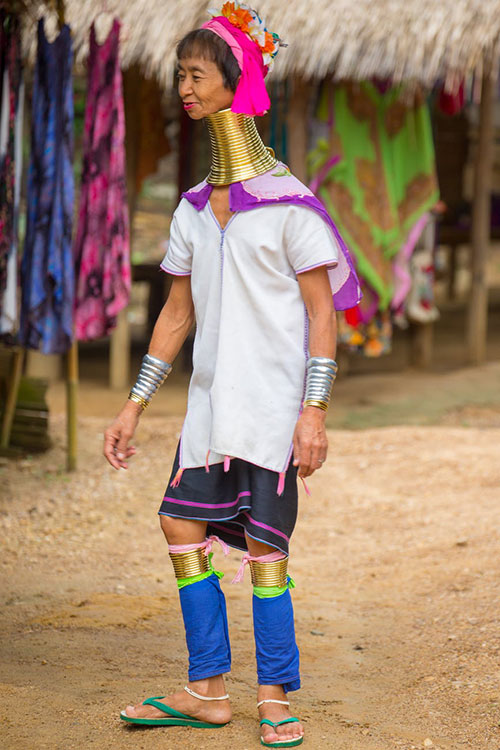 It is traditional for the Kayan women to wear such neck adornments. So, many generations have been doing it. The local women take the neck rings off only for as long as it’s needed to put a bigger jewelry piece, with more coils, on. They never go without this item because it turns into something like a neck corset and the neck muscles atrophy, so they can’t support the head on their own anymore. That’s why it’s dangerous to take the jewelry off.

But why did women even start to wear neck rings? How did it all begin? There are several theories, several possible explanations.

Some anthropologists suggest that the Kayan tribe started to wear neck rings and changed their appearance to look less attractive to other tribes so that not to become their slaves. It could be sort of protection from becoming a slave to other communities.

Another explanation states that women started to wear the neck coils to highlight their pretty female necks, which look more delicate and slender than a male neck. A lot of cultures have glorified a women’s neck and considered it beautiful. The Kayan people just over-reacted a little and wanted to make their necks longer and longer to attract the men’s attention, until they turned themselves into someone odd and unique.

In the Kayan folklore, dragons are important figures and famous mythological creatures. So, there is a theory that people wanted to resemble a dragon’s appearance and wore metal adornments that looked like dragon scales. Besides, the Kayan women wear not only neck coils but many round bracelets and anklets as well.

And the last possible explanation is that people started to wear jewelry that covered the whole neck to protect themselves from tigers’ bites. These people lived on the territory where wild tigers were common and they often attacked humans, so maybe women wore neck coils to survive. Or it’s possible that such neck jewelry was symbolic protection, a kind of an amulet.

In the modern day, a lot of the Kayan women still keep the tradition and wear the neck coils constantly. They say that it’s their way to identify themselves as the Kayan. Some females do it to attract tourist money to their communities, it helps them to earn a crust. Although, many young women stopped wearing neck rings because it’s bad for their health and they can’t normally integrate into the global society. No matter what, this unique tradition lives and the Kayan people continue to pass it down the generations.