In the Renaissance era, a wedding was the only time when a woman was truly seen by society. Not veiled or cloaked, not modestly covering behind her clothing but showing off her beauty and wealth. Especially if she was a noblewoman. Dressed in glorious wedding attire tailored according to the latest fashion trends and from innovative materials, adorned with costly jewelry, holding fancy bridal accessories, a Renaissance bride would ride her white horse through the city streets from her father’s house to her new husband’s. And the whole city would watch her with awe and notice every detail of her attire.

The article is based on the video by Natalya Skornyakova: https://www.youtube.com/watch?v=9qAWgVq3tG8

But what exactly a bride would wear in the Renaissance era?

Her wedding attire consisted of a snow-white chemise as a basic layer. It could be plain white, with white lace and other decorations or it could be embellished with multicolored silk embroidery, gold embroidery, lace, etc. In the 16th century, brides also started to wear pantaloons, and wedding pantaloons were decorated in the same fashion as chemise.

Her bridal gown was not white but colorful. At the time, a bride was a showcase of her family’s wealth. Her dress was made from the most expensive fabric they could afford. Like these two samples of costly velvet interwoven with gold thread. Such velvet was the most desired fabric among the Renaissance brides.

As it is today, the wedding dress had to be outstanding, expensive, and unique. High-status brides wore silks and velvets embellished with gold embroidery, pearls, gems, lace, and furs. These outfits were extremely labor-intensive and time-consuming, so sometimes, the artisan died before he or she finished the dress.

Interesting fact! There is a widespread belief that the first white wedding gown appeared in England on Queen Victoria. But this isn’t right. Long before Queen Victoria, in the 16th century, a fashion for white wedding dresses existed in Italy, in only two cities – Venice and Genoa. This trend was invented in these two cities. 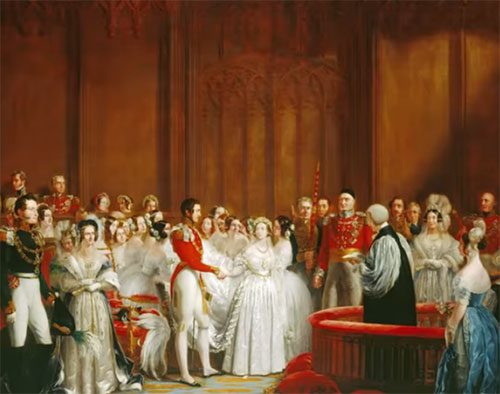 But wedding gowns weren’t the only elaborate pieces in a Renaissance bride’s wardrobe. Her headdress was just as important. And don’t forget about other accessories – shoes, a belt, etc. The bridal headpiece of wealthy ladies was always very richly decorated and costly. As décor, they used gold and silver threads, feathers (often peacock), pearls, little gold and silver flowers or other jewels, jewels with enamel and mother-of-pearl, tinsels, and other fancy items. Such headdresses were rather large and intricate, a great addition to just as ornate wedding gown. Surprisingly, in most cases, the headwear looked stylish, even with so much décor. 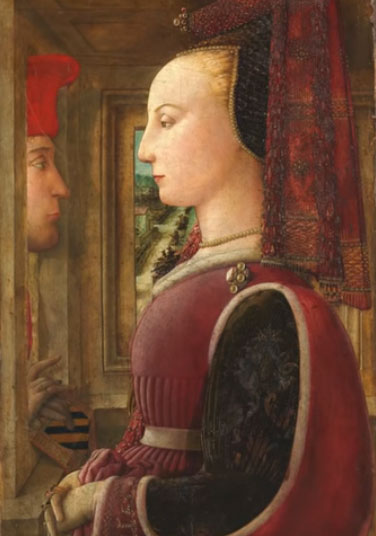 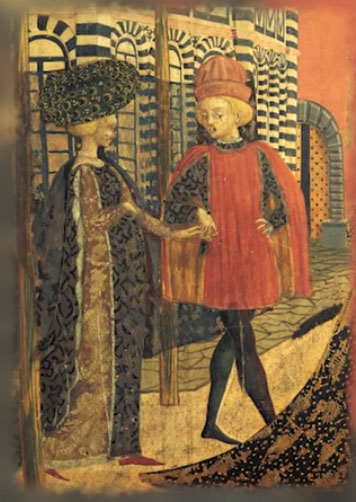 In the late 15th century, bridal headpieces became less elaborate and soon, brides returned to wearing their hair loose on the wedding day. Since this was the only time a woman was allowed to go to public bare-haired. Why not use it fully?! Unmarried maidens wore their hair in elaborate hairstyles (various braids and updoes), married women covered their heads with veils, wimples, hats, etc. Only brides could wear loose hair.

Often, these loose tresses were adorned with gold threads to add some sparkle. By the way, in Italy at the time, there was a trend to lighten women’s hair. It must have looked gorgeous with shining gold threads visible between the strands of hair.

When you look at 16th-century portraits of women, you can determine a bride only by her loose hair, not her gown or accessories or other features.

We should also mention a curious and very desired bridal accessory in the 15th-16th century – a “zibbelino”. It was a small animal pelt of a sable, marten, or ferret worn draped over a shoulder, neck, or arm. A zibbelino was a popular gift of a groom to his bride, a fashionable accessory of wealthy women, and a talisman (for fertility and protection in labor).