Around the 16th century, wealthy ladies and ordinary peasant women wore a very cute and handy clothing accessory – a partlet. It covered the low decollete of a dress and looked charming. Especially those costly and fancy partlets of the royals and high-status ladies that were decorated with gold embroidery, pearls and gems, fine lace, etc. By the way, the story behind the term “partlet” is also curious, connected with a hen.

A partlet is a fashion accessory worn by females in the late 15th – 17th century. It is a garment that covers the neck, shoulders, and neckline of a woman. It is typically worn over a shirt (smock, shift) or over a kirtle. A partlet is sleeveless but can have a collar, and it is usually fastened somehow (tied or buttoned or pinned) in the front.

Interesting fact! Men actually wore partlets as well in the 15th-16th centuries. They added a partlet to a low-cut doublet, and these partlets were typically decorative and made from fine fabrics. Although, a partlet was mostly a female accessory.

Peasant women wore cotton, linen, sometimes silk partlets that were mostly functional items – to cover the low neckline for modesty and warmth. Rich ladies often wore ornate partlets to accessorize themselves rather than keep their body warm. Their partlets could be made from velvet, satin, linen lawn, brocade, and other costly fabrics. 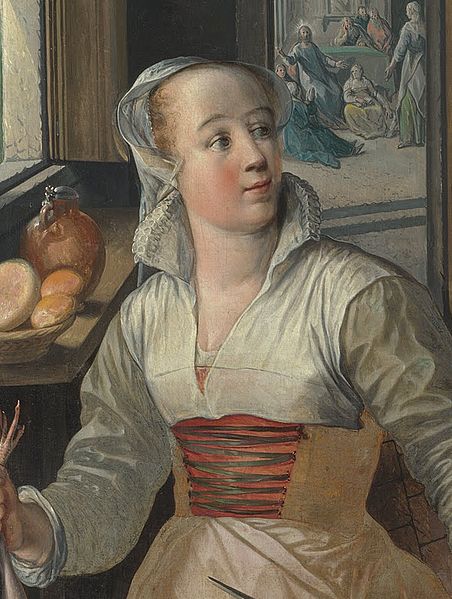 Joachim Beuckelaer’s painting The Four Elements: Fire. A Kitchen Scene with Christ in the House of Martha and Mary in the Background, 1570. In this cropped part of the painting, you can see a peasant woman in a partlet with a ruffle collar. Photo from Wikipedia.org

In the early 16th century, the most fashionable partlets were black and made from velvet. But throughout the years, women used a variety of different partlets made from different fabrics, of different cut and design, embellished in different ways. For example, this accessory could be adorned with silk embroidery, gold and silver embroidery, lace, pearls, jewelry, feathers, ruffles, and so on. A partlet could be collarless or it could have a small stand-up collar or a large ruffle collar.

Fun fact! The term “partlet” is from the early 16th century and it may derive from “Dame Partlet”, a French traditional name for a hen. Maybe that’s because a partlet with a ruffle collar brings to mind the ruffle of feathers on some hens’ necks. 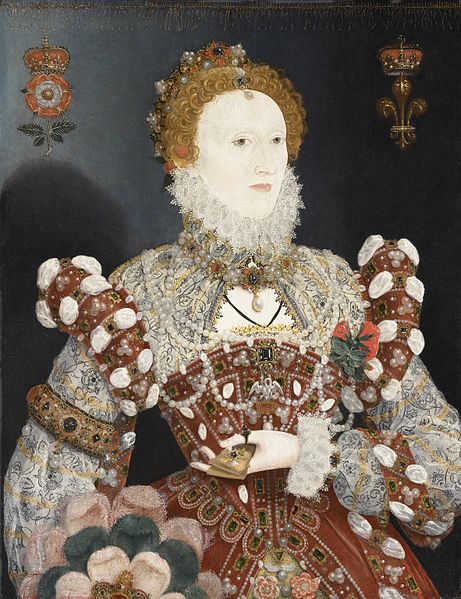 The “Pelican Portrait” of Queen Elizabeth by Nicholas Hilliard, ca. 1573-1575. Queen Elizabeth wears a very ornate partlet with a high ruffle collar, adorned with embroidery and lace. Photo from Wikipedia.org