For years, women suffered from the lack of sewn-in pockets in their clothes, and even today, many female garments are pocketless. But fashion always finds a solution to any arising demand. That’s why women’s detachable pockets or tie-on pockets appeared in the mid-17th century and remained trendy for almost 300 years. Working women wore them under an apron, high-class ladies tied these pockets inside their crinolines, many European national costumes included detachable pockets – women all around Europe loved this wonderful accessory.

First detachable pockets appeared in ladies’ wardrobes around the 1650s. They were made from linen, cotton, leather, and other materials. And they were popular among rich and poor, nobles and peasants, in different countries, as a fashionable and traditional accessory.

Women often used pairs of pockets attached to a single string. They were tied to the waist as a one-piece accessory and hung on either side of a woman’s hips. 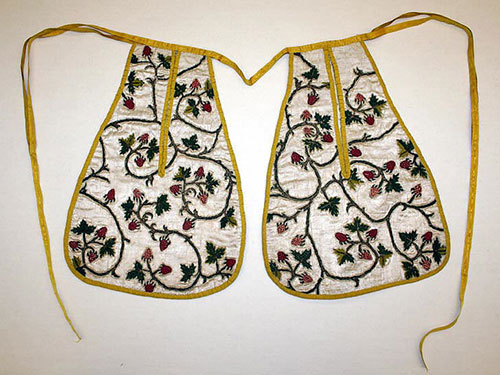 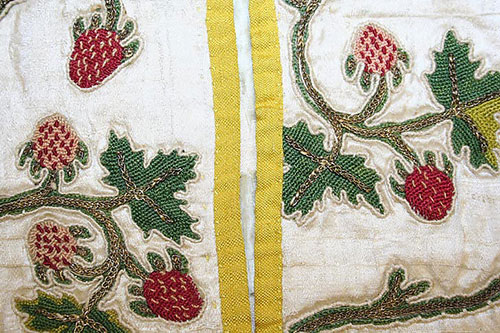 British pair of pockets with cute embroidery, 1700-1750. From The Met Museum

Some pockets were plain and simple because women wore them hidden under the upper garments, others were attached on top of the main garments and were visible to everybody, so ladies adorned them with embroidery, applique, sewed them from costly fabrics, and so on. Sometimes, even initials or other personal info was stitched onto a tie-on pocket.

Those pockets that were hidden, women could wear inside their crinolines and bustles. There were special openings in a dress and petticoat so that the ladies could reach inside the pocket.

Although, not all detachable pockets were hidden. Those used by working women were easily accessible, so they were typically attached to the waist on top of other clothing or only under the apron.

Note that detachable pockets usually were rather large – up to 40 cm long and 30 cm wide. It’s not easy to hide such a big pouch inside your clothes. But the size let the women carry a lot of small goods in these pockets. Besides, such accessories were flat and convenient.

By the way, tie-on pockets were in use for so long – from the mid-17th to early 20th century – because they coexisted with handbags and sewn-in pockets just fine. Women could have all three variations at the same time. They all served different purposes.

But what did ladies carry in their tie-on pockets? It’s not that easy to find out because such pockets were a very personal thing and only the owner knew what she put into one. Still, there are ways of learning that. For example, there are police records of thefts with lists of items stolen from detachable pockets. A few novels, old letters, and diaries also give us some idea of what women carried in their pockets.

So, here are things that could be found in a lady’s tie-on pocket:

Of course, the contents of a pocket depended on the female’s profession and job, her status in society (royalty didn’t carry scissors or thimbles with them, obviously), and her personal needs.

In the 17th-18th century, a lot of people considered their pockets to be the safest place to put valuable items. So, women typically carried rather big sums of money, costly jewelry and pocket watches, and similar things in their detachable pockets. Also, ladies often carried their husbands’ belongings as well.

Tie-on pockets were an extremely useful and cute women’s accessory. It’s no wonder this item remained fashionable for centuries. By the way, detachable pockets make a comeback these days as a part of traditional attire, for instance, in Norway, Sweden, and Ukraine, where you can buy or have made to order modern tie-on pockets you can wear with the folk costume or contemporary clothes. 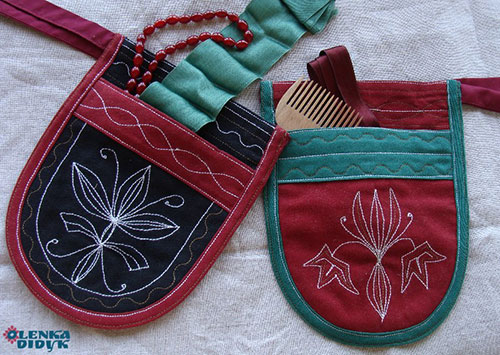