People washed their clothing in urine in the Middle Ages. Up to 7-8 hours of urine fulling

This article will help you appreciate your washing machine even more. Because not so many years ago, in the Middle Ages (lasted to the 15th century), people washed the fabric before making clothes in human urine. And the process lasted not a few minutes but up to 7 or 8 hours. You can imagine how hard the job of a fuller – person who washed cloth – used to be at the time. Are you already hugging your washing machine? Because personally I’m not sure if I could endure the medieval washing.

In the Middle Ages, wool became England's biggest export. By 1300, there were 15 million sheep, almost three times the human population. So fullers would have been thick on the ground, too – a vital link between weavers, dyers, and cloth merchants. You could earn up to 3 times as much as a field laborer, but the work was so unpleasant that this must have been little comfort.

When raw wool is spun and woven into a loose-weave fabric, it's left dirty. The grease is needed to ease the weaving process. It's after that, the fuller has to turn this rough cloth into something more usable.

The fulling process also closes the fibers together and makes the surface of the cloth smooth and even. 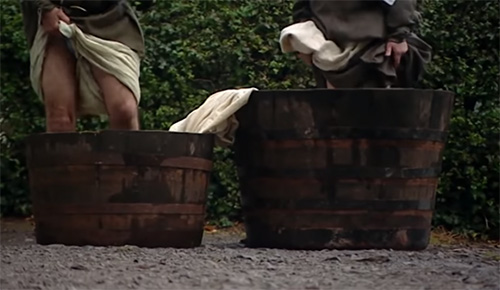 The important thing is to get as much movement as possible, so dancing is probably more effective than walking. Basically, you just keep moving and every now and then you have to stop and move the cloth.

The reason they used urine is that when has it been left for a week or two, it decomposed to produce a rich source of ammonia, which is perfect for removing the grease. Part of the job would have involved collecting urine from door to door.

The amount of time needed for fulling depends very much on the size of the cloth, but it can take a long time if you want to really have the work finished. The faster you move, the sooner it is done. But when you start to move faster, you start to breathe harder, and the smell doesn’t help at all. 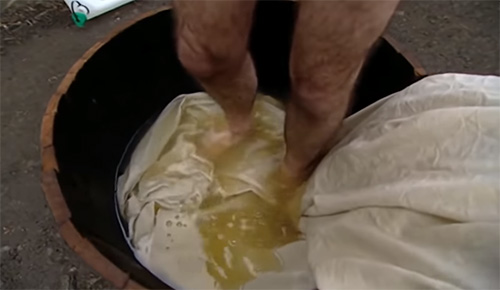 After many miserable hours of urine fulling, you'd end up with good and clean fabric, which would have been used to make clothes worn by the knights and squires and kings and bishops, not only ordinary people. In fact, without this worst job, the big players in the Middle Ages would have been stark naked.