Almost every traditional costume has special accessories that make it complete. They add some peculiarity and sometimes even national character to clothes. Mostly jewelry is used as national clothing accessories, but in some countries, very interesting and extraordinary objects become accessories to the traditional attire.

In this article, we won't talk about hats, wigs, shoes and other parts of the traditional costume. We will tell you only about unusual accessories that are used around the world to complete the national costume.

Some nations have the tradition of wearing metal rings on their necks. More often women do that, but men also sometimes wear neck rings. Such tradition exists in Myanmar (Kayan Lahwi group) and in South Africa (Ndebele tribe).

In South Africa this accessory is called idzila. Ndebele women begin to wear neck rings after they get married. Such rings symbolize the bond and faithfulness to the husband. And the richer husband is, the more rings wife has. Nowadays such tradition is not as popular, as it used to be, but still, Ndebele women often wear neck rings. In some cases, this accessory may even cause the "elongated neck", which we consider to be a disease and Ndebele people – an ideal of beauty.

The national costume of Kayan people (Myanmar) includes neck coils too. 2-year-old girls begin wearing neck rings, and every year or so the number of rings increases. Sometimes there are up to 20 rings. Kayan women don't ever take their neck coils away because the muscles are atrophied and they can't keep their neck straight without this metal support. There is even such a punishment for women: to remove neck rings. In some cases, it caused death because neck broke without them.

Such unusual traditional clothing accessory as neck ring or neck band (coil) in Myanmar brought a new ideal of beauty to the people in this country. They think that elongated neck is very attractive, so many women wear neck rings to be more beautiful. The neck after years of wearing this extraordinary accessory really looks much longer. But actually, the neck itself remains its length. But the collarbone and ribs are pushed down under the weight of rings. So, the neck looks longer.

It is a special small bag, a part of Scottish national attire that is worn by men with a kilt. The sporran is used instead of pockets because mostly kilt 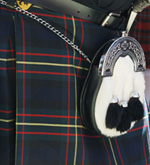 doesn't have pockets. So, men put money, phones, and other small things into it. This bag is made of leather or fur and ornate. It hangs below the belt buckle. Leather belts or chains are used to hang it up.

Scottish men pay great attention to the design of the sporran, it should match kilt and the belt buckle as well – the whole costume actually. There are a lot of different designs of sporran. For example, it can be made from the pelts of small mammals (fox, badger, otter etc.), with the head forming a flap at the top of sporran. In another case, sporran can be made of leather with beautiful patterns cut on it and with silver or golden elements for decoration. Sometimes a sporran is small and simple, and sometimes it is a real work of art.

There are many different spellings for this part of Indian traditional costume: mathpati, maang tikka, matta pati, mang tikka, maata pati etc. But they all mean the same – a set of jewelry for the head. There are plenty of designs and variations of mang tikka. Usually, it is golden with a lot of precious and semi-precious gemstones and pearls. In general, it consists of a pendant and chains that are ended with small hooks. These hooks cling to hair, so you are able to hang the pendant on the right place and change its position quickly. Mathpati can have only one or many chains. Usually, they are golden.

Mang tikka is worn by Indian married women. It is an obligatory part of traditional wedding attire but can be worn for any important events and even in ordinary life.

Abaniko is a Philippine hand-held fan of a particular form. It is a part of the traditional costume of Philippines and often is used with the baro't saya. Abaniko fan is made of stems and leaves of abaniko plant. It is woven into a shape of a paddle (but I'd say it looks more like a heart).

From the ancient times abaniko plays a great role in the conversations between people. Women used it to show their emotions and mood. For example, open abaniko which covers the chest area means modesty; rapid fan movements mean displeasure; placing abaniko on the right cheek means "yes", and on the left cheek – "no".

Abaniko is a very important accessory for women in the Philippines.

Obimakura is a small pillow that is used by Japanese women when they're putting a kimono on. The thing is, a kimono is worn with an obi – special sash. And to tie obi correctly, to have a perfect knot you need some help. Obimakura makes the knot beautiful and supports it. That's why it is often used. It is put on the back, inside of the obi belt.

Today obimakura is one of the most popular kimono accessories. There are several various shapes of this pillow. For example, the most common knot (taiko musubi) is made using an elongated round obimakura.