Traditional costume of Greece. When did Greek men begin to wear skirts?

Many people imagine Greek traditional costume as a toga (a piece of linen cloth wrapped around the body), but this is completely wrong. The national clothing of Greece is very modest, colorful, multilayered, and unique. Of course, there are some regional features and many variations of garments, but in general, the typical styles of Greek traditional costumes are related.

The history of Greek national clothing can be divided into several periods: ancient period, Byzantine period, Ottoman period and modern period. In the ancient period, Greek people indeed wore togas, chlamys, chitons and similar pieces, but such tradition is not preserved anymore. The Byzantine period brought bright colors and richly patterned cloths to the Greek fashion. During the Ottoman period, the clothes of people of different occupation and religious affiliation were strictly regulated. This period brought vraka (traditional breeches) and foustanella (traditional men's skirt) to the Greek fashion. In the modern period, the national attire of Greece became more casual but with a lot of features of Ottoman clothing. Today loose-fitting white cotton or silk shirts are worn, together with embroidered vests and jackets. Women use long chemises and skirts, men still wear vraka and foustanella. Both males and females prefer multilayered garments, colorful but with few decorations. 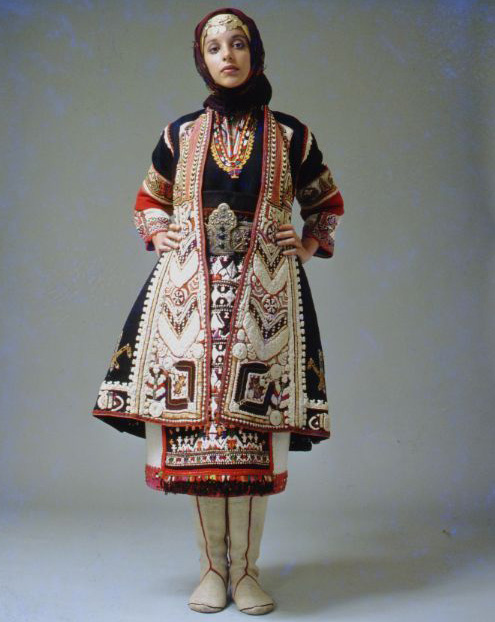 Like in many countries around the world, Greek national clothing often shows such important characteristics of the wearer as age, class, marital status, a region of origin, occupation etc. Both men's and women's clothing tells a lot about their owner. For example, on the island of Skyros shepherds and farmers wear very different garments, so you can name the occupation of the man in front of you even without talking to him. Women in some villages of Peloponnisos use scarves called "mandili" of different colors to indicate their marital status. Young girls wear white mandili, young married women prefer yellow color, older women use dark-green or brown mandili, and widows use a black one.

There are 2 main types of Greek traditional costumes: with foustanella (traditional men's skirt or kilt) as a main piece and with trousers as a main piece. In general, men's traditional attire of Greece consists of a foustanella or trousers (full cut or baggy trousers), a shirt called "poukamiso", a vest called "yeleko" or "meindani", a sash called "zonari", a hat, special leg coverings called "kaltses" and leg garters called "gonatares", and shoes called "tsarouhia".

Foustanella skirt is very popular in many regions of Greece. It is a wide and short skirt, knee-length or above the knee-length. Usually, it is black or white. Sometimes it is connected to the upper part of a garment, in other cases, a foustanella is worn like a separate piece.

Greek man in the traditional costume based on the foustanella skirt

This garment is very interesting and rather unusual for modern Europe. But historically many European countries used skirts as a traditional male clothing. European royalty (mostly men) even used tights, leggings, and stockings. So, the usage of foustanella and some kind of tights by Greek men is not as funny as some people might think. Actually, foustanella is worn in Greece since the 12th century. It's an ancient tradition which is kept even in 21st century. Foustanella skirt consists of 400 pleats which symbolize the years of Greece being under the Ottoman rule.

Greek men's baggy trousers or breeches are called "vraka". They are popular mostly at the islands and the costal part of Greece (while foustanella is more often worn in mountain regions).

Traditional male shirt poukamiso is loose-fitting. It is usually made from white silk or cotton. The neck and handcuffs are often embellished with lace. All that makes poukamiso very festive. 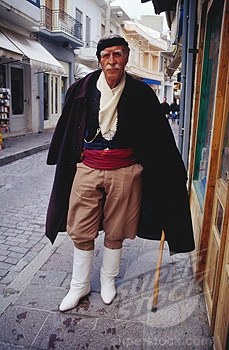 Greek men cover their legs with very interesting pieces of clothing. First of all, they use kaltses (usually, white) with foustanella; it's something like tights. Shepherds and farmers wear thick woolen leg coverings to protect legs from cold and thorny plants. Such coverings are complemented with handmade leather shoes called "trohadia"; they look like sandals. But the most popular Greek shoes are tsarouhia. They are moccasin-like leather shoes with a large woolen pompon at the pointy nose. Such shoes are the official piece of Greek guards (Evzones) dress. But many people of different occupation use tsarouhia as well.

Greek men often wear headdresses. The most widespread are fez and koukos. These are skull-caps, sometimes with tassels or other decorative elements.

Some traditional clothing of Greek men is very masculine, convenient and casual; other garments are offbeat, eccentric and unique, but they still look very male.

The folk dress of Greek women is multilayered, modest and feminine. The main pieces of a female traditional costume are: a long chemise called "poukamiso", a sleeveless vest called "segouni", an apron called "bodia", a sash called "zonari", a scarf called "mandili", and shoes called "tsarouhia" (similar to men's shoes). 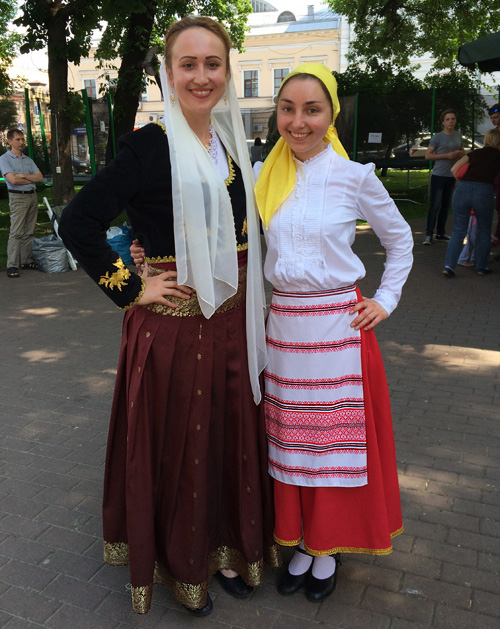 The cotton chemise is the main part of the costume. It can be of any color or print. The vest is usually woolen or velvet. It can be long or short. The color is usually black or white, sometimes with some embroidery at the front part. The aprons are various, often bright and colorful, sometimes woven and sometimes sewn and embellished with embroidery or ribbons. The scarves are large and also colorful. They cover women's head and shoulders. In some cases only face is left uncovered, other women use the scarf to cover only the top of the head, leaving the hair visible. 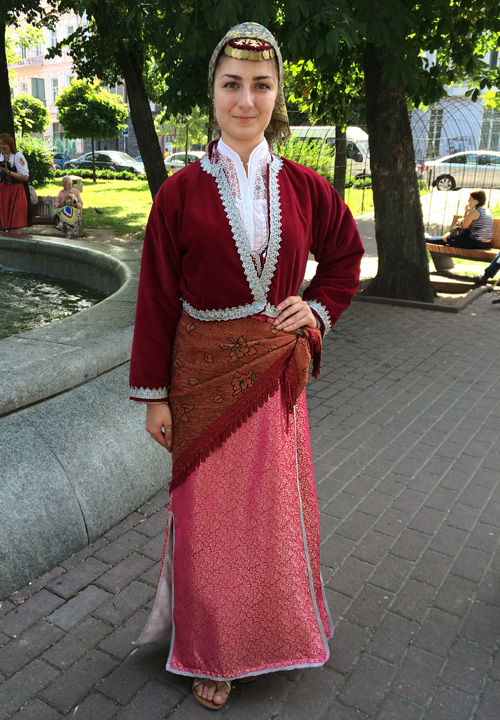 Greek women like to use many layers of clothing. There can be a long shirt (sometimes an undershirt is worn as well), a vest or coat, an apron, and a waistcoat on top. If the costume is for everyday usage, dark colors are often used; the material and patterns of attire are simple. If the garment is festive (worn on holidays, celebrations and special occasions), then it usually is bright, made from expensive high-quality materials, with embroidery and embellishment. Festive costumes are often complemented with some jewelry. Greek women don't use much jewelry, but the necklaces with gold coins are rather popular, as well as matching earrings. 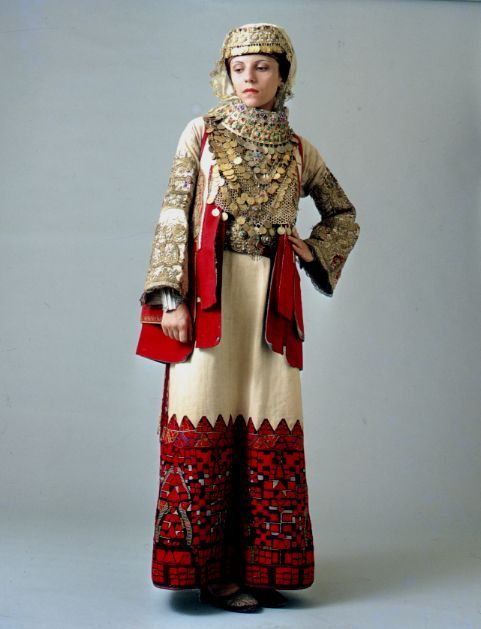 The answer is that the 'skirt' made its appearance approximately the same time sheep arrived in Greece. It is amazing how well those sheep can hear things like togas being taken off.
Quote
Refresh comments list