Traditional costume of Indonesia. 300 ethnic groups with their own clothing traditions

Indonesia is one of the most heavily populated Asian countries. More than 200 millions of people and over 300 different ethnic groups live in this country. That's why the traditions and folklore of Indonesia are diverse and unique. It is an island country which also influences the culture and customs of its citizens. Many traditional Indonesian costumes are originally the folk clothing of Java and Bali. Though, every ethnic group and minority in this country has its own clothing traditions, methods of making their national costumes, and tastes in adornments.

Many Indonesian outfits are originated from the biggest islands of the country. But today people from different regions of Indonesia use these garments as their national clothing. Though, most Indonesians usually wear the traditional clothing for special occasions and ceremonies while in day-to-day life they often prefer the Western style of clothes. 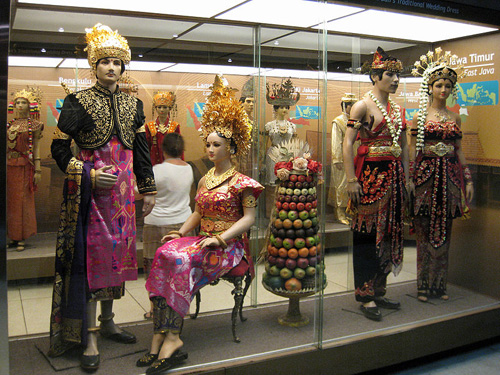 Traditional Indonesian wedding dresses: Bali (at the left) and Java (at the right). The photo was made by Gunawan Kartapranata in the Museum Indonesia, Taman Mini Indonesia Indah, Jakarta. Photo from Wikipedia.org

The most recognizable pieces of Indonesian national costume are kebaya and batik. Though, originally these items belong to Javanese, Sundanese, and Balinese culture. But they've become widespread and typical for the whole country.

There are many different traditional outfits used in Indonesia by various ethnic groups. But all of them have some common features: the costumes are bright, multicolored, richly embellished with flamboyant patterns and jewelry, complemented with striking headdresses, etc.

This country is famous for its textile industry. There are many techniques of weaving cloth, dyeing it, and decorating the fabric. There are 34 provinces in Indonesia, and each of them uses its own materials, colors, patterns, and methods of making fabric. Very often the cloth is hand-woven; people spend months to make it. 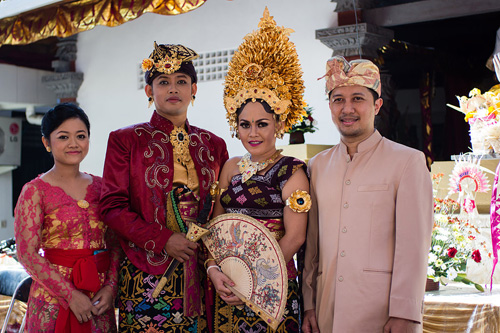 The most popular kinds of fabric are batik (we'll talk more about it later in this article), songket, sarong, ikat/iket, tenun, tapis, and ulos. Songket is a brocade fabric, hand-woven in cotton or silk, and with intricate patterns made in gold or silver threads. Sarong is a fabric (the piece of clothing made from this fabric is also called "sarong") widely used by men and women in the rural areas. It has various printed designs: floral, checkered, animal, symbolical, etc. Ikat fabric / iket fabric is a cloth made with a help of a special dyeing and weaving techniques. In this case, the yarn is dyed before weaving, and the pattern is clear at both fabric faces. Tenun is a hand-woven cloth made from wood-fiber, silk or cotton threads. Tapis is a traditionally hand-woven fabric used in Sumatra. Ulos is a traditionally hand-woven cotton fabric, densely patterned and draped over the shoulder by Batak people (Sumatra). All these fabrics are considered to be an important part of Indonesian heritage. They are still made and used in Indonesia nowadays.

The most popular male costume in Indonesia is a batik shirt. Actually, batik is a cloth made using a wax-resist hand-dyeing technique. Such cloth always has very beautiful patterns which differ from region to region. Batik shirts are sewn from batik fabric and worn by men in Indonesia, especially in Java. Batik is used to make various pieces of male clothing: shirts, sarong-like skirts, and wrap-around cloths. Batik shirts are the most common in modern Indonesia. They can be long-sleeved (for formal occasions) and short-sleeved (for informal and semi-formal occasions).

Another obligatory piece of Indonesian traditional costume is called "peci" (other names are "songkok" and "kopiah"). It is a men's Muslim cap similar to a Turkish fez. Peci is made from black velvet. It is worn with a batik shirt or even western-style clothing, especially by officials and men attending formal occasions. 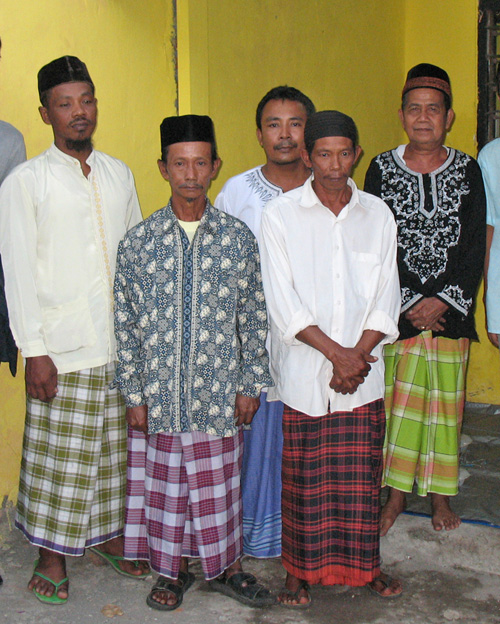 Sarong is also worn by Indonesian men. It is a kind of wrap-around skirt. The cloth is usually colorful, with checkered or another pattern. This garment is very popular in Java, Sumatra, Bali, and Kalimantan.

Other than batik shirts Indonesian men also use a traditional Muslim shirt called "baju koko" or "baju takwa". This is the garment for religious ceremonies and similar occasions. This shirt is worn with sarong and peci to make a full set. 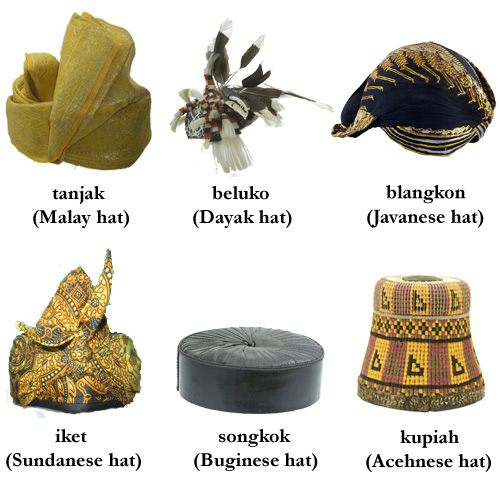 The female traditional outfit in Indonesia is called "kebaya". This costume has a long and complicated history: it has been the clothing of feminists and nationalists of Indonesia, of female prisoners-of-war during the period of Japanese occupation of the country, of wealthy women in Europe and Asia (when it came into fashion), of Indonesian nobility, of sellers in the market, and finely of any Indonesian woman who honors the traditions of her country. This garment is a part of Indonesian heritage since the 15th-16th centuries. 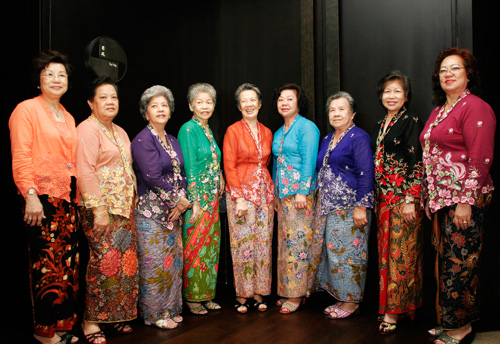 It is a modest and beautiful dress made from fine fabric. Kebaya is worn by Indonesian women for weddings, ceremonial events, celebrations, official diplomatic meetings, official national events, etc. But many women wear kebaya every day. It is usually made from silk, thin cotton, polyester or nylon. Festive kebaya is embellished with lace, delicate embroidery, floral patterns, and bead-work. Kebaya is often worn with woven wrap-around skirts or similar garments (sarong, batik, etc.); it also can be adorned with a batik sash or a kain draped over one shoulder. Kebaya usually has long sleeves, but it isn't obligatory. This piece of Indonesian national clothing is very bright, colorful, beautifully embellished, and iconic for locals.

But kebaya is not the only traditional garment in Indonesia. Women also wear sarongs (but while men's sarong usually has checkered pattern, a female piece is adorned with a floral pattern instead), songkets (very festive handmade garments woven in cotton or silk, and patterned with gold or silver threads), and ikats (clothing made from ikat fabric).

Indonesian women also wear beautiful blouses called "baju kurung" and "baju bodo". Baju bodo is a loose usually transparent blouse; it is a regional garment, not very widespread in Indonesia. Baju kurung is a female blouse originated from Malaysia and Brunei; it is a loose-fitting blouse, collarless and long-sleeved one.

Indonesia is very rich in traditional headdresses. These pieces are among the most important items of Indonesian folk costumes. Here are only several most popular and widespread headgears: jamang (Sundanese bride headgear, also used by Balinese and Javanese folk dancers), kembang goyang or cunduk mentul (golden flower hair ornament; very popular all around Indonesia), jilbab (traditional Muslim women's veil that covers all the hair and neck, leaving only the face visible), kerudung (traditional Muslim women's veil; it is draped in a way when parts of neck and hair are visible), konde or sanggul (hairbun attached to the back of the head by Balinese and Javanese women; tusuk konde hairpin keeps the hairbun in place, and jasmine flower garland or similar embellishments compliment the headdress), siger (large horned and gilded women's headgear), and suntiang (Minang bridal headdress; a large gilded crown usually gold). 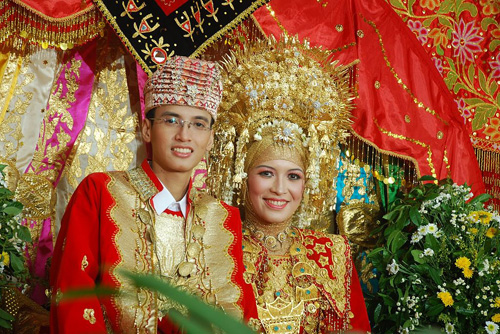 #2 Umi 2017-11-11 04:26
Most female cloth in Indonesia wear Kebaya for dailybasis or Ceremony. Kebaya most popular wear during Kartini Day, it is formal dress for woman when inaguration State ceremony
Quote
#1 ika yudi setianingru 2017-03-02 11:39
i love my country so much. although we have hundreds of ethnic group, we have so many beautiful and unique culture. :)
Quote
Refresh comments list