Tunisian traditional jewelry pieces are ornate, rather massive, and very beautiful. They are used not just to adorn the costume of a female but as a means of energetic protection, a way of honoring the ancient tradition, and for economic purposes as well. The jewelry collection of a Tunisian woman equals her private bank account. She’s able to manage it as she likes – buy, sell, barter, present or receive as a gift, etc. Vintage jewels are often transmitted within generations of the family. Modern Tunisian women still prefer the traditional jewelry items to ordinary ones used around the world.

Tunisian women are fond of jewelry. And it is not a greediness or materialism, but the ancient old tradition. You can’t imagine a festive Tunisian dress without jewelry to complement it. On special occasions (like weddings, ceremonies, and great celebrations) women wear their best of the best jewelry pieces. They ought to because traditionally the number of such adornments shows everybody the social status of the whole family. Even little girls are allowed to use a lot of gold jewelry. But no one can match Tunisian brides in the number of jewels. There is a tradition that the groom presents gold jewelry to his future wife (necklaces, bracelets, rings, pendants at the temples, etc.). So, every man tries to buy as many pieces as he can afford. As a result, the upper body of Tunisian brides often is thickly covered in gold. 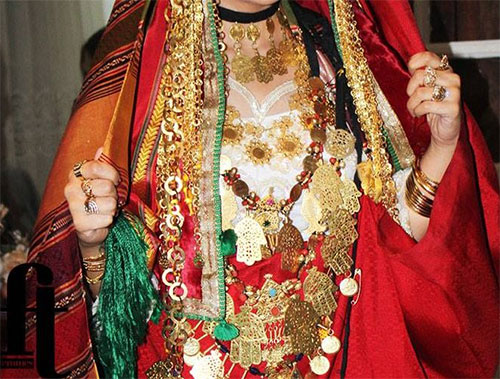 The jewelry in Tunisia serves several important purposes: economic, symbolic and mythical, practical and ornamental, cultural. Adornments are the property of the woman. She can freely buy or sell them without asking for anybody’s permission. So, it’s her own capital stored in gold and silver, which is very convenient. To talk about the symbolic and mythical meaning of jewelry, people believe that certain images, patterns, and materials have the ability of protection from evil eye. That’s why the jewelry items are often used as talismans in many countries, and Tunisia is no exception. The cultural purpose is also very important. When a woman wears the traditional jewelry pieces instead of ordinary ones used throughout the world she shows her adherence to the traditions and customs of her country. 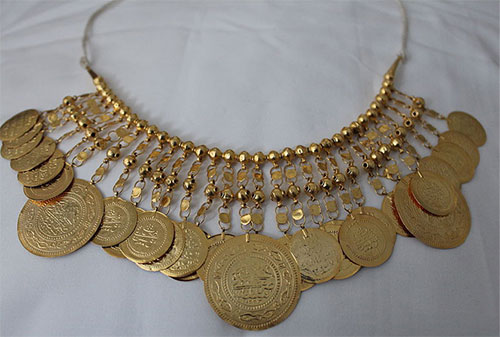 But surprisingly, the jewelry pieces themselves remain comparatively simple. I mean, Tunisians don’t aim to get the most expensive items in the world. They prefer semi-precious stones (amber, coral, cultured pearls, etc.) to diamonds, emeralds, and sapphires. While gold is the most popular and valued metal, there are lots of jewelry made from silver, golden metal, and copper. And the items made from cheaper materials aren’t less intricate and sophisticated; they are works of art as well. 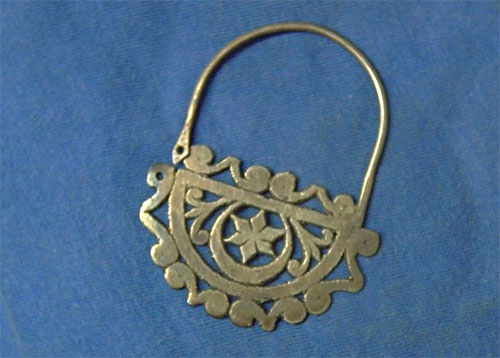 Vintage Tunisian metal earring. It is simple but very cute

Modern Tunisian women didn’t give up on using plenty of jewelry pieces. More than that, they wear the traditional adornments in day-to-day life, with ordinary clothes. This is one of the reasons why jewels made from simpler materials became rather popular among Tunisian females. The shapes of the pieces are traditional (hands of Fatima or Khomsa hands, sovereigns, chainlets, moon-shaped items, etc.), but the general view is modern and neoteric. Such adornments suit to both vintage folk costumes and modern outfits. 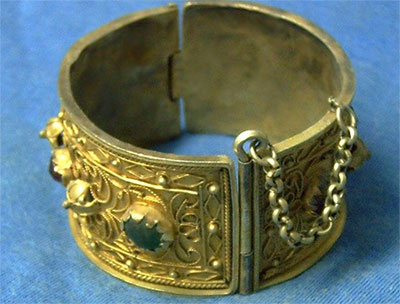 Tunisian traditional jewelry was largely inspired by the Arab-Muslim geometric forms, but also by Jewish jewelers who came from Palestine in the 17th century. Among the most popular items are jewelry pieces made from gold sovereigns and other coins; these coins are used in necklaces, earrings, to adorn the headdress etc.

Different regions of Tunisia and different ethnic groups who dwell in this country have their own clothing traditions and thereafter unique jewelry traditions as well. One of the biggest minority groups in Tunisia is Berbers or Amazighen. It is a large ethnic group located in the North Africa (it covers a part of the territories of Tunisia, Morocco, Algeria, Libya, Egypt, and several others). The Berber culture is very rich and ancient; these people honor and highly protect their traditions and beliefs. They managed to save most of their heritage till today. That’s why we’re dedicating the whole section of this article to the Berber jewelry.

There is a large amount of vintage Berber jewelry pieces that can be found today in museums, exhibitions, and private collections. And they are real works of art, worth seeing because Berbers are skilled craftsmen and goldsmiths. Berbers have a tradition of passing on the jewels from mother to daughter. When a Berber woman is getting married her mother gives her a jewelry piece – either a vintage one, transmitted within generations of the family or a brand new one, bought specially for this occasion. But often the items are resized or fitted by a goldsmith in accordance with personal preferences of the new owner. So, the jewelry pieces older than the 19th century are seldom found in the original form. 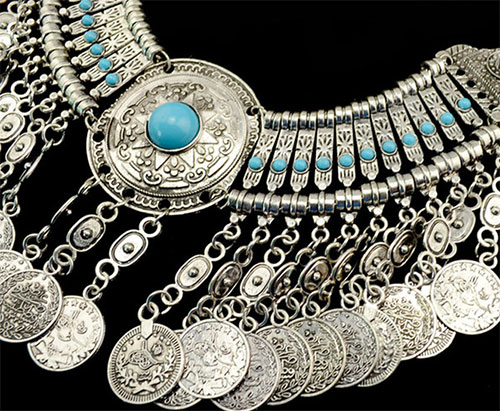 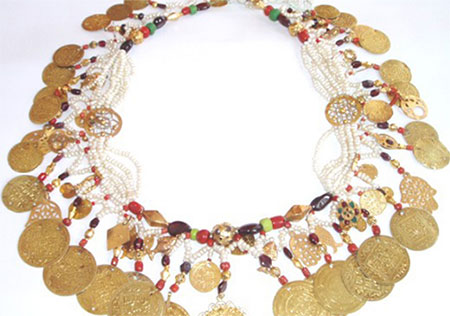 The main jewelry items in Berber culture are necklaces, large earrings (often complemented with a chain passing over the head and pendants at the temples), brooches, and bracelets. The components of these jewels can be coins, semi-precious stones (amber, pearls, and coral), shells, small pendants, etc. 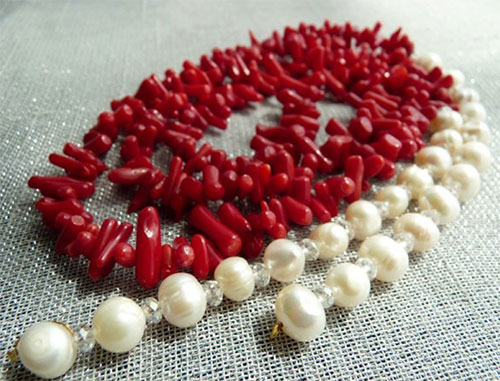 Necklace of coral and cultured pearls

Berbers believe in a sacred value of the jewelry pieces. They often use them as charms and talismans. That’s why there are some strict requirements to the jewels, but most of them are kept in secret from foreigners. Sometimes, it is an exact number or components (for example, tlila necklace must have 7 coins in it), in other cases, the careful choice of materials, and so on. We’re lucky, Berber tribes have kept their jewelry traditions, therefore we’re able to appreciate firsthand the beauty of Berber jewelry pieces.

Top-6 jewelry pieces every Tunisian woman should own

There are 6 main jewelry pieces that are a must-have for every Tunisian woman. No matter vintage or modern, these items are in every female’s jewelry box in Tunisia.

Rayhana – pendants at the temples made from small metal hoops, often decorated with semi-precious stones. 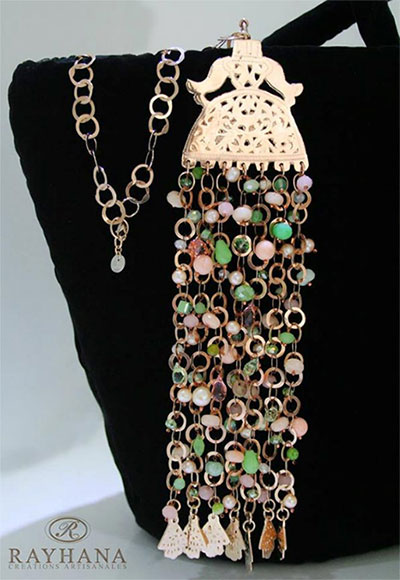 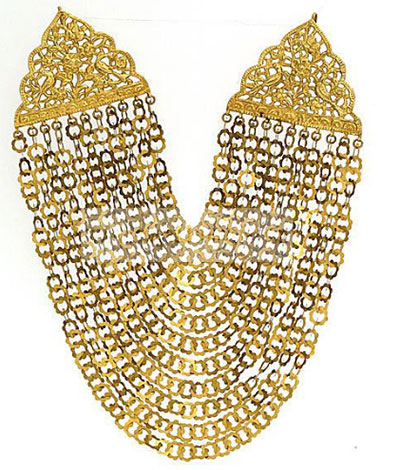 Beautiful rayhana – pendant for the temples

Large earrings. Usually, they are moon-shaped or khomsa-shaped (the shape of a hand) and decorated with beads, semi-precious stones, and metal elements. 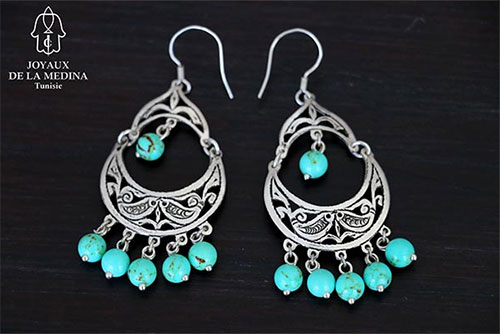 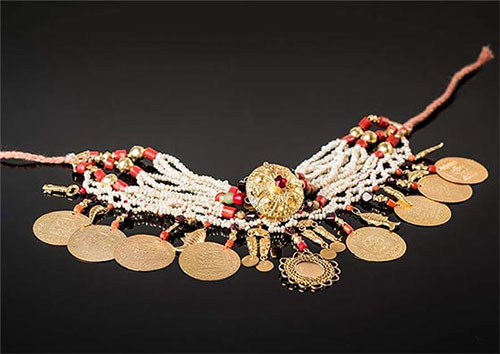 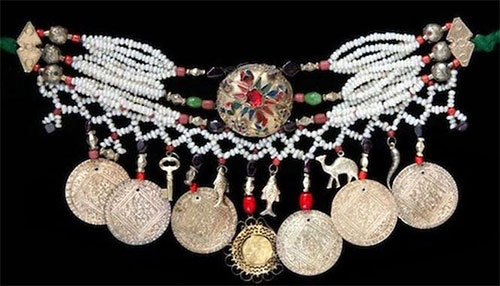 Meguies – rings of intricate design. A lot of Tunisian jewelry pieces are made using a technique “wire weaving”; the items are made from gold or silver wire. There are many various designs of meguies. 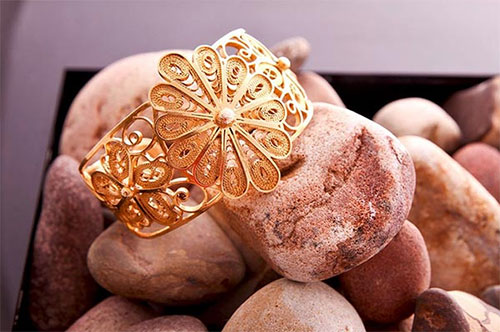 Kholkhal – Tunisian anklet (ankle bracelet). It is traditionally worn by females with a wedding outfit. 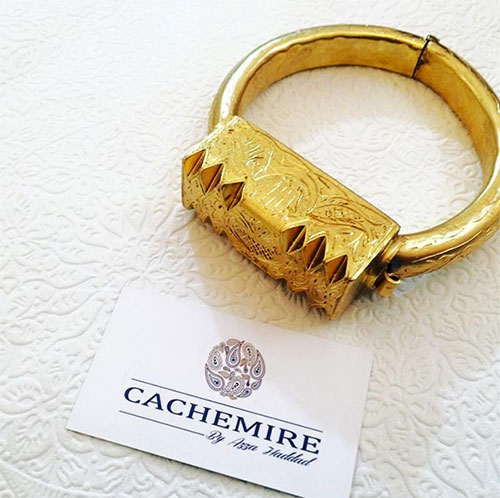 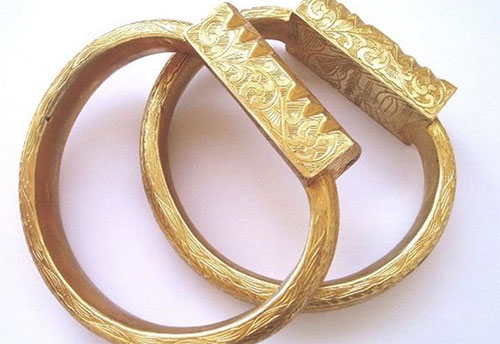