Medieval finger rings and earrings from the British Museum. Gold jewelry with gems

Vintage jewels are always fascinating. But the older a piece, the more remarkable it seems. The medieval period for Europe was a wonderful time, with all those rituals and customs, traditions and beliefs, clothing and jewelry crafts, etc. By the way, medieval jewels are among the most beautiful and unique in the world. We’d like to offer you proof in the form of a small demonstration. Here are several precious medieval and post-medieval finger rings and earrings with gems from the British Museum in London. Let’s find out more about these items.

Hi, I’m Naomi Speakman and I'm the curator for late medieval Europe at the British Museum. Today, I’m going to be talking about the stones in medieval jewelry pieces.

One of the things you might not know about the medieval collection of the British Museum is that we have a lot of jewelry – hundreds of finger rings, brooches, and a few earrings as well.

But what is even more curious is the connection between text and object, because lots of them have little inscriptions on – some personal, some magical, some medical…

First of all, I'm going to tell you about why precious metals and gems were so important in the Middle Ages. It's not just because they're beautiful but, like everything that's medieval, it's deeply symbolic as well. Actually, in the Bible, the City of Jerusalem (the Heavenly City) was described in Revelations as being made of gold and different precious stones. So, you would want to cover your precious relics with as precious material as possible, because you're literally creating heaven on earth with the materials.

One stone that you'll actually see described in a Bestiary (an encyclopedia of different natures of animals) is the pearl, which comes from an oyster.

Here is an example of jewels with pearls. This is one earring and we've got two prongs coming down – there would have been a third one as well. Not many pearls survived from the Middle Ages because it's attached by a tiny little pin. So, often, what we'll actually find is the pin and no pearl remaining. 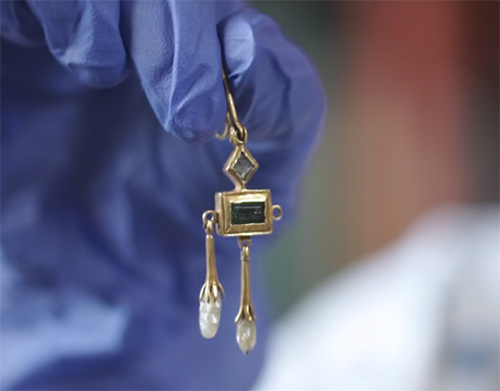 This earring is so ornate. It was found in Greece, probably made in Greece as well. It's not certain exactly when but between about 1350 and 1470 roughly.

The pearl was said to have been formed – in the medieval description – by the oyster opening its shells and soaking in the rays of moonbeams and sunbeams. If you wanted to locate a pearl, it was said that the stone agate was attracted to it, almost like a magnet, so you'd be able to suspend an agate and it would locate your way to the pearl.

And as with everything, there's also a symbolic property as well. And the shell of the oyster was associated with the Virgin Mary, so another connection with purity.

As we're talking about religion, the stone sapphire was deeply connected with the clergy. And the blue of the sapphire was connected with fidelity in marriage. So that's quite appropriate, if you think about its use, for bishops. And we find sapphires used on gigantic gold rings frequently, thought to be for bishops. More than one had been found in bishops’ graves. These sorts of rings would have been used in the consecration ceremony where the bishop was consecrated into his role, and for that, you were meant to use a ring which was gold set with a gem. 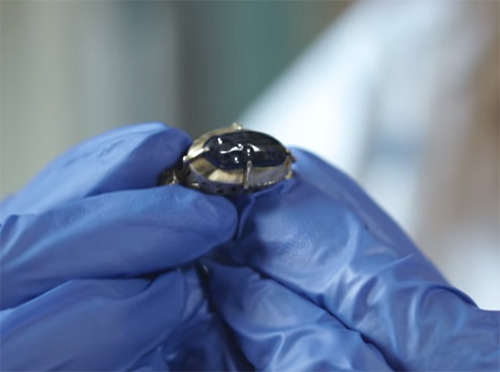 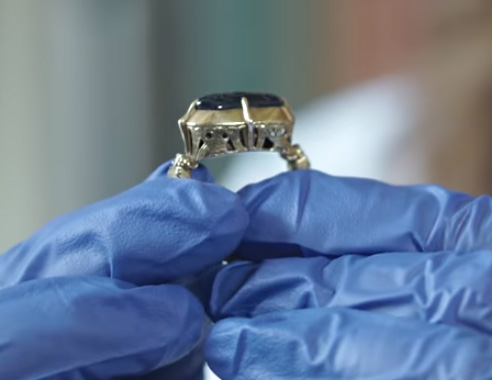 There's another reason why sapphire might seem appropriate for bishops. And that's because they are connected with truth and truth-telling. So, although in a reality, we know that bishops controlled vast areas of land, they were very powerful, very wealthy,.. probably didn't always tell the truth – at least there was an aim in the stone on their ring. 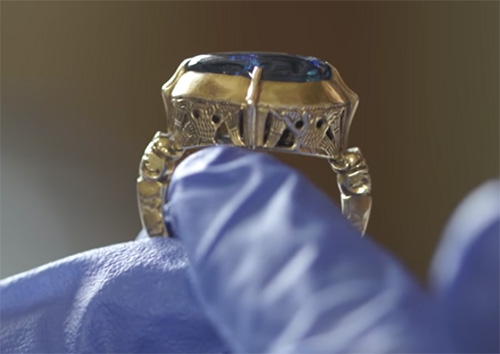 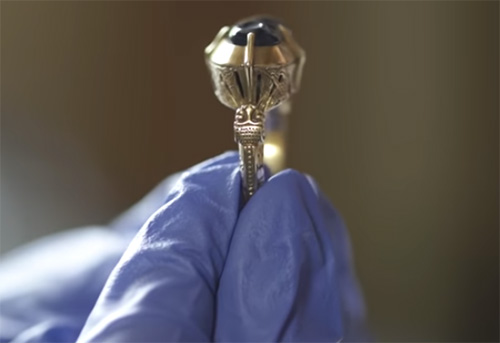 When we look at this one, there is so much detail. We have a stone and it's set up high in this kind of openwork setting, and 4 claw arms hold the stone in place. We have wings of beasts in this openwork, almost like a cage. And when we go down into the shoulders, we see the open mouths of two beasts – they look almost like lions. 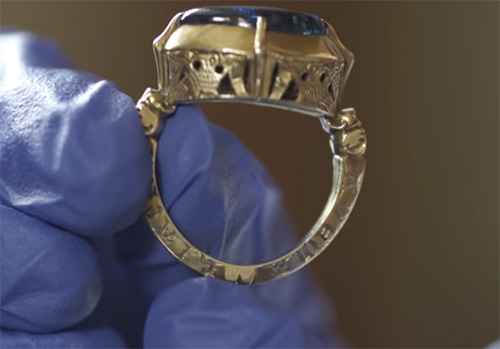 This is a massive gold ring. This is the 15th century, from England. And we have what might look like quite an aggressive point coming out here. That's because this cut is called a “point cut” and the diamond is cut octagonally. We have a pyramid at the top, and the base of it also would have been a pyramid. 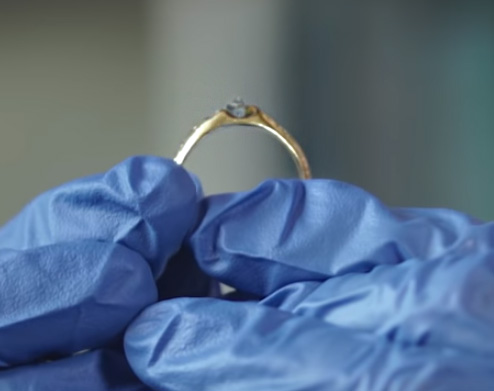 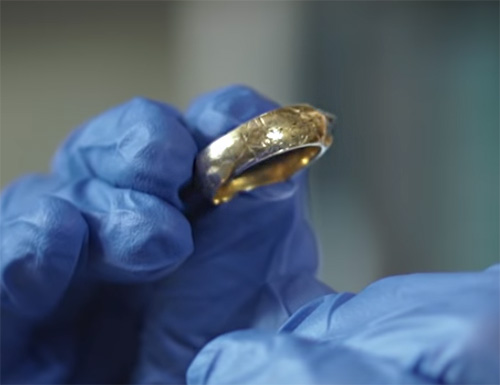 Now, diamonds have very clear connections with purity because you can see through them. And they are also connected to the marriage ceremony. One of the first legendary recordings of the use of a diamond in an engagement ring – and in fact the use of an engagement ring – was in 1477 as a betrothal ring between Mary of Burgundy and Archduke Maximilian of Austria.

And this diamond-set ring also would have likely had a protective role for the wearer, like an amulet. This is where gems were really important in the Middle Ages – because they had amuletic properties. We can tell that because it has two images engraved on either side. This is a type really popular in England in the 15th century called an “iconographic finger ring” because literally, it is engraved with icons. This shows the image of the Virgin Mary and the infant Christ, which was one of the most popular images you'd see throughout medieval Europe, alongside the crucifixion. 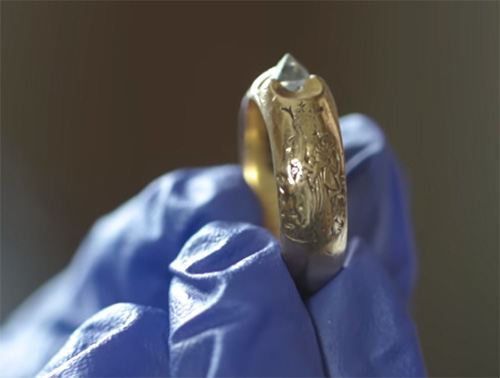 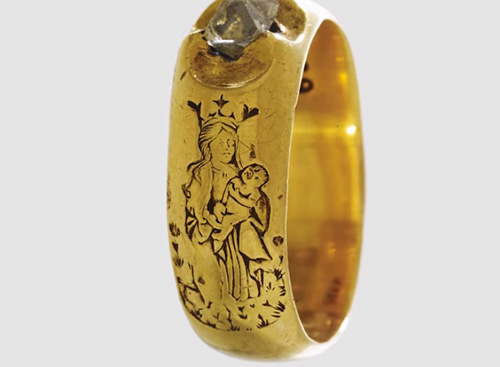 And another English connection – when we turn it around, we have a man kneeling in clerical dress at an altar. It's quite difficult to make this out, which just shows how important it is to be able to hold it and look up close. The top of his head is impaled with a sword, and this is Thomas Becket at the moment of his murder. 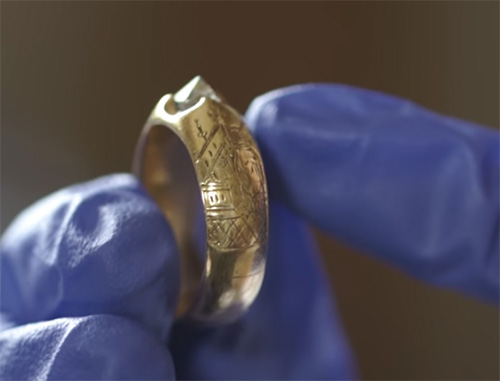 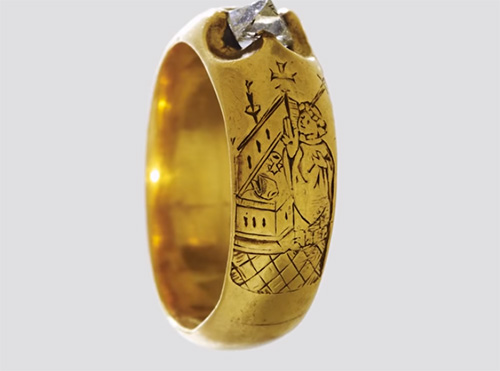 Within this hoop, we have this incredible diamond, and then we have the protective qualities of the Virgin Mary and St. Thomas Becket as well.

The last thing we're going to look at is from a post-medieval ring, but it's a slightly odd one. This is called a “toadstone”. This ring is from the 16th century. It's a gold hoop and we can see this kind of mottled-colored shiny stone. 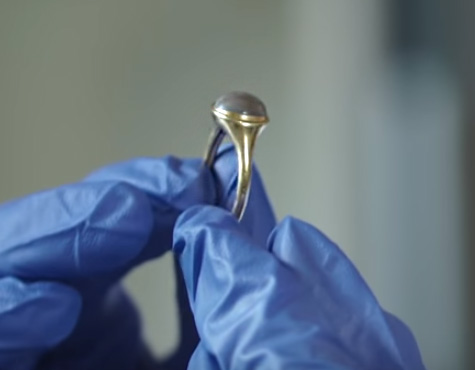 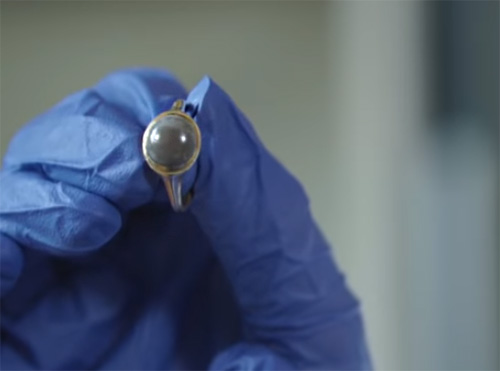 Now, a toadstone at the time was thought to have come from the head of a toad. And it was said that it could cure poisons. But actually, in reality, we know it's from the fossilized tooth of a fish.

So, with all this jewelry, although publicly it's a show of wealth and status and fashion, the actual reasons for people wearing them would have been much more personal. Why they'd have inscriptions on them, who gave them to them, and the different properties behind them.