The traditional costume of Norway called “bunad” is usually complemented with certain jewelry pieces. The locals love silver jewels, including brooches, clasps, buttons, buckles, etc. But the main and most prominent traditional jewelry pieces worn with bunad are halsknapp and sølje. Let’s find out what they are, how they look like, and who wore them. Is it true that you can tell a lot about the person by the jewelry on his or her clothing? Are folk jewels still in trend today or are they only museum exhibits by now?

Norwegians love silver. This metal has been considered magical for centuries. There are many fairy-tails about mountain trolls being blacksmiths. So traditionally, people in Norway wore silver jewelry with their national costume. Sometimes, gold was also used but it was and is much less popular.

In day-to-day life, people wore fewer jewels but the festive attire was richly adorned with silver. The male costume had silver buttons, belt and shoe buckles, a pin at the shirt’s collar, cufflinks, etc. The female outfit was embellished with a silver pin at the shirt’s collar, a brooch, belt and shoe buckles, belt plaits, a clasp of the bunad bag, cufflinks, buttons, head adornments, etc. But earrings weren’t a part of the traditional bunad jewelry. 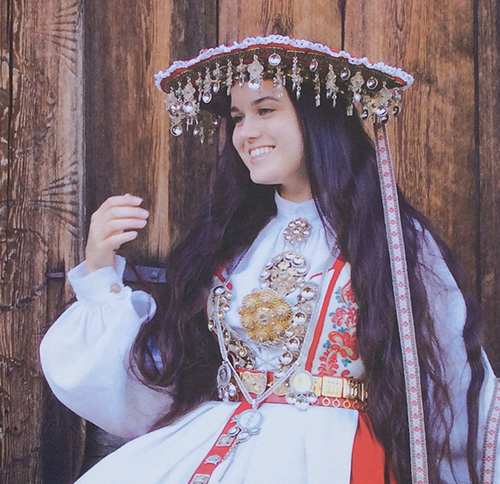 The photo is from “Broderte Bunader” by Anne Kristin Moe. Photographer: Laila Duran

A halsknapp is the neck closure, the pin used to fasten the collar of the shirt. Men wore small and a bit simpler neck closures, while women often used much bigger and more intricate pieces.

A sølje is a brooch worn below the halsknapp. It often (but not necessarily) had a round shape and was adorned with a lot of tiny pendants or hanging parts that dangled and tinkled from the movement. They attracted attention to the jewels.

All these jewelry items are still produced and worn today by Norwegian men and women. Though today, there are handmade and machine-made jewels, while in the past, only handcrafted items were available. Of course, industrially produced pieces are less expensive – triple the price for handmade jewels – but they often aren’t as elaborate and beautiful. Silver blacksmiths and jewelry makers used such traditional techniques as filigree and granulation to make the pieces look extraordinary. 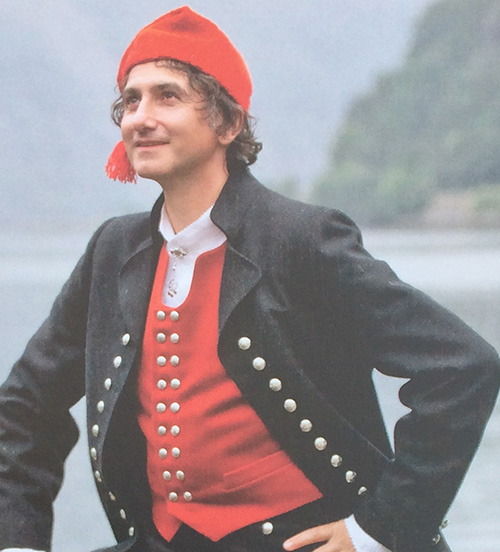 In the past, Norwegian traditional jewelry were means to show status, origin, and wealth. Many families stored their family funds in silver jewels and passed them from one generation to the next. It is a mighty fine tradition that helped to save many valuable pieces to these days.