Traditional male shirt jewelry in Poland. Polish men used functional jewels when there were no buttons

Women of different ethnic groups and different countries have been using jewelry with their national clothing throughout human history. At the same time, men wear considerably fewer jewels. Still, there are some really nice pieces. For example, in Poland, males of particular regions traditionally wore cute shirt buckles and shirt collar studs to fasten their folk shirts. Very few of them survived to this day, so we decided to exclusively show you these jewelry items preserved in Polish folk museums.

These male jewels were used by Polish gentlemen to fasten their shirts at the chest. Particularly, the cut of a traditional shirt from Podhale region of Poland requires something to close the opening for the head. Otherwise, too much of a chest is visible, which was considered disgraceful. Also, in the cold season, fastening a shirt was necessary to survive. The traditional shirts didn’t have buttons, like we’re used to having today. Buttoned men’s shirts appeared only around 1875. So, the local men started to make and use specific jewelry items – shirt buckles of various designs. In the 19th century, this item was a must in Podhale region.

Polish shirt buckles were usually metal, made from a specific alloy (brass + nickel + silver or copper + nickel + zinc, etc). They were beautifully decorated with ornamentation made in engraving, embossing, stamping, openwork, and other decorating techniques. These sometimes were real masterpieces. Of course, some were simpler and cheaper than others so that men could wear them for different occasions – in daily life or during festivities. 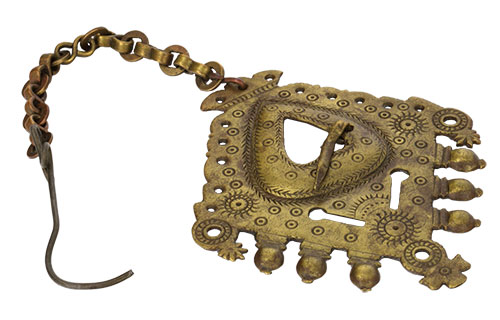 Authentic shirt buckle from Ratułów, near Zakopane, Poland, the 1920s. It is stored in The Dr. Tytus Chałubiński Tatra Museum in Zakopane

The designs of such shirt buckles were diverse – circular or rhomb shape, stylized buckles shaped like bird heads or some abstract design, etc. They also could have a cross adorning the buckle, as Polish people traditionally are very religious Catholics. In the 19th century, the most ornate and decorative shirt buckles were worn by young Polish shepherds and farmworkers, while senior shepherds used less embellished jewelry items.

All these shirt buckles were manufactured by the local artisans and small craft shops. They were handmade and unique.

But closer to the end of the 19th – the beginning of the 20th century, Polish folk costumes were used rarer, people started to wear factory-produced clothes, so traditional shirt buckles soon also became rare and almost disappeared. Ordinary buttons replaced ornate buckles. For some period of time, this folk jewelry was still used by the Polish men as a decoration rather than a functional item. But with time, it got out of use completely.

Unfortunately, too few vintage shirt buckles survived and can be found in Polish museums today.

This old tradition to wear ornate shirt buckles to fasten the collar of a folk shirt returned to Poland in the 1990s when people began returning to their roots and relearning how to use the traditional garments. They started to make and buy handmade national clothing and jewelry, and modern shirt buckles produced according to the authentic techniques appeared on the market again, especially in Podhale region of Poland.

The shirt buckle we’re showing you here is one of the rare pieces of authentic male shirt jewelry that survived to this day. It is from the 1920s, probably made by the craftsman Ignacy Prokop “Magdziarz” in Ratułów, near Zakopane, Poland. It has a rhomb shape, with a heart design in the center, and a cross at the tip. The surface is covered with simple but symbolic patterns. The buckle is equipped with a chain and a hook. Today, this buckle is a part of the collection of The Dr. Tytus Chałubiński Tatra Museum in Zakopane, Poland. 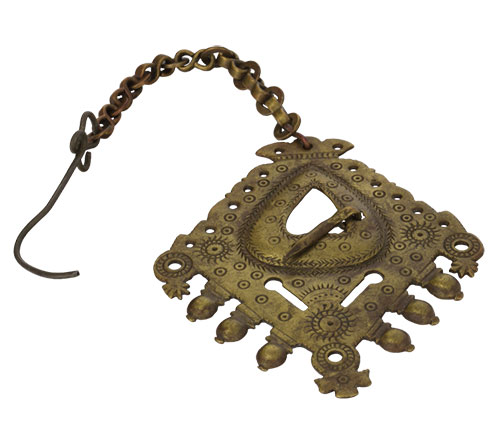 Authentic shirt buckle from Ratułów, near Zakopane, Poland, the 1920s. It is stored in The Dr. Tytus Chałubiński Tatra Museum in Zakopane

These tiny jewelry pieces are lovely. They were much smaller than shirt buckles and less noticeable, but they sometimes were just as decorative and beautiful as the buckles. Such studs can often be seen on male folk costumes of Poland. They were used to fasten the shirt collar. But studs were used by women as well. 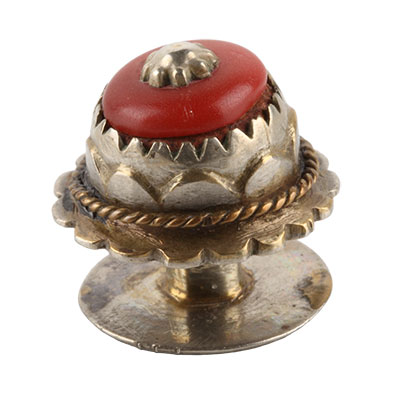 The fashion for collar studs originates from the gentry fashion of the 17th and 18th centuries. Polish noblemen at the time wore gold and silver studs that showed off their status and wealth. In the 19th century, Polish peasants imitated their ornate studs but made them cheaper by using simpler materials and techniques.

Male shirt collar studs were sold at the markets, church fairs, or they were made to order.

This particular shirt collar stud is from the late 19th century, it was made near Kraków, Poland. And now it is stored in The Seweryn Udziela Ethnographic Museum in Kraków. This jewelry item was made from an alloy (lead + zinc + nickel). It is adorned with a bright bead. Some studs sported coral beads, but as not everybody could afford them, there were also simpler pieces with glass beads. By the way, male studs always had a single bead as decoration, while female studs were usually embellished with a bead and several garnets circling it. 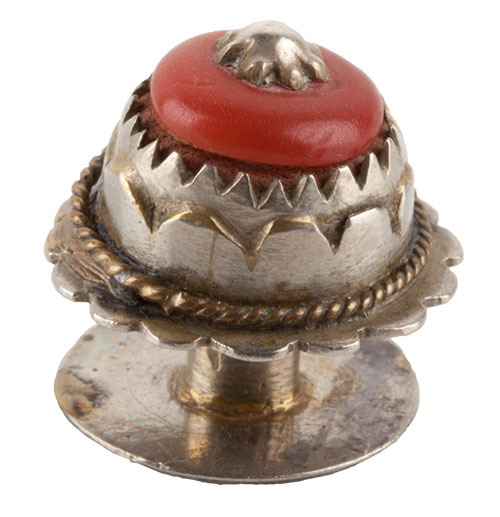 Vintage shirt collar stud from Kraków, Poland, the late 19th century. It is stored in The Seweryn Udziela Ethnographic Museum in Kraków

Also, this stud is adorned with a wire pattern and a stylized star at the center. The shape of the shirt collar stud calls to mind a crown. This jewelry item might be not as ornate as some intricate gold or silver folk jewels used in other parts of the world, but it was a piece used by ordinary peasant people and it tells us a lot about Polish folk culture and clothing tradition.