Among all the traditional costumes of the Greek islands, that of Crete is particularly pretty. It differs much from the classic Greek outfit. One of our favorite accessories of the Cretan folk clothing is the knife that adds some really authentic features to both male and female dress. And, of course, there are exquisite jewelry pieces made from coins – what Greek female costume goes without them?

The Cretan national attire was formed during the 16th century. There are a few variations of the costume according to the certain area of the island. But mostly, the differences are small. 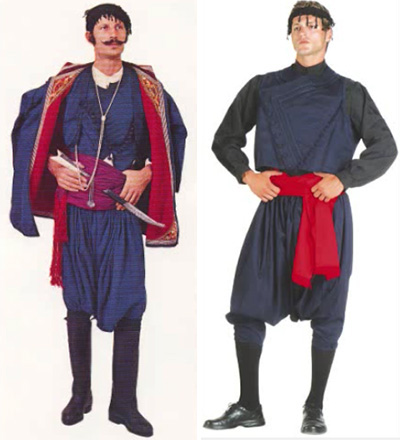 The scarf is worn wrapped around the head of a man. The trousers or, to be more precise, breeches are wide and worn tucked into the high boots. Of course, men also use shirts – usually, white or black and made from rough fabric. Besides the boots and scarf, one more important accessory is used – long sash made from red or black silk cloth. In winter, Cretan men add a warm cape made from good thick woolen fabric.

The male festive outfit looks pretty much the same. However, it has more decorations, for instance, embroidery and is produced using more expensive fabrics. 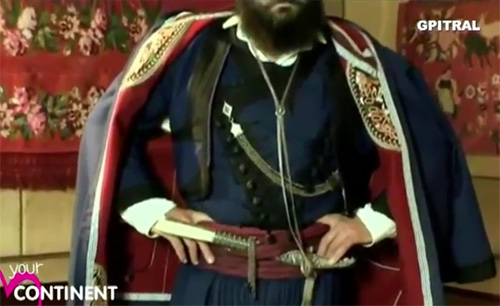 Among the items never missing from the male costume, was the knife with a horn handle, tucked in its sheath into the wide belt or waistband of the vraka. Knifemaking is still a living craft in Crete.

Although the craft of boot making is fairly common in Crete today, it is rare to find a craftsman who continues to employ strictly traditional techniques, using wooden pegs instead of nails to bind the upper part to the soles and hand stitching the leather. In the high mountains, such boots are worn continuously for three months.

In most countries, the female folk outfit is more common and popular among the locals, even for the day-to-day life. But in Crete, the situation is reversed: men wear their traditional clothes much more frequently than women. The female folk dress is rarely worn in daily life; mostly, folklore dancers and singers use it. 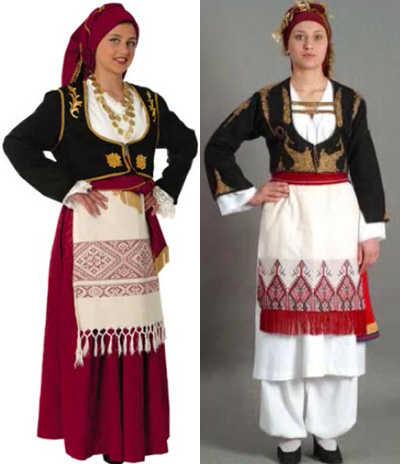 For women, the main elements of the traditional outfit are a full skirt in broad folds down to the ankles and a waistcoat. Actually, the costume also includes a loose blouse tucked into the skirt, an ornate apron decorated with embroidery, a headdress, and black flat boots or heeled shoes.

The waistcoat is, usually, velvet, with a deep neckline and beautiful adornments: gold braiding and coins. In some regions of Crete, baggy trousers and a long overshirt serve instead of a skirt and blouse. The female headdress consists of a little fez called “papazi” and/or a kerchief. 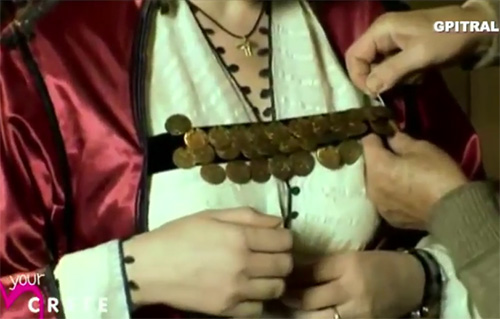 For celebrations, the costume is more ornate, made of a finer material in richer colors, beautifully embroidered, and decorated with jewelry. For Cretan women, jewels play an important role in their life. All those gold and silver necklaces, rings, earrings, pendants, decorations made of coins, etc. are designed to indicate the wealth and status of a female (and her whole family), as well as accentuate her beauty.

And the last but not the least women’s accessory in Crete is a small knife called “argirobounialaki”. It is similar to the male knife but smaller. The argirobounialaki is worn attached to the belt of her outfit. 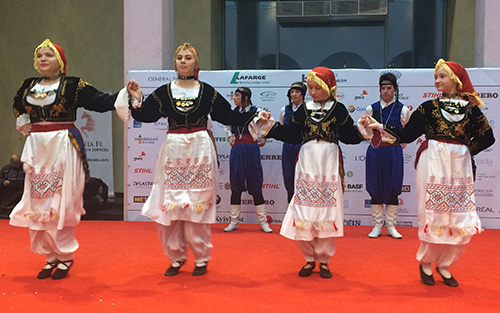