Pontifical Swiss Guard's traditional uniforms for every occasion and rank

Some of you already know that the Vatican is a very special country inside of another country, it has its own unique government, administration, military, and so much more. In this article, we’ll be particularly interested in the bright and eye-catchy traditional outfits of the so-called “Pontifical Swiss Guard” (the armed forces of the Vatican). Their uniforms are among the most offbeat and unusual military uniforms around the world. Probably because of its color palette.

You might be a bit confused as to why Vatican troops (the Vatican is a city-state inside Italy) are actually called Swiss guard and not Italian. That’s because these military forces and honor guards are really Swiss, from Switzerland. And they have a very long history of serving in the army. Once upon a time, Swiss soldiers, or rather knights, were considered among the best warriors in Europe. They often sold their skills as mercenaries. And in 1506 a group of Swiss mercenaries came to the Vatican and soon became the local military and guards. Since then, the Swiss Guard protects the Vatican and the Pope.

But enough of history, let’s get to the most interesting topic – the uniforms of the Pontifical Swiss Guard.

Today, they actually use several styles of uniforms. If you think the yellow, blue, and red uniform is the only one for these armed forces, you’re wrong. There is a simpler everyday uniform, Western-style black suits, and so on. Every ensemble suits its purposes.

But the most famous and vivid uniform is their official full dress uniform made in yellow, red, and blue colors and Renaissance style. This ensemble actually became official in the early 20th century, though it was inspired by 16th-century depictions of the Swiss Guard. At the time, they wore warrior armor with clothes in yellow-red-blue shades. These colors appeared on the guard’s outfits because they were the family colors of powerful Italian noble people – the Della Rovere and Medici families. 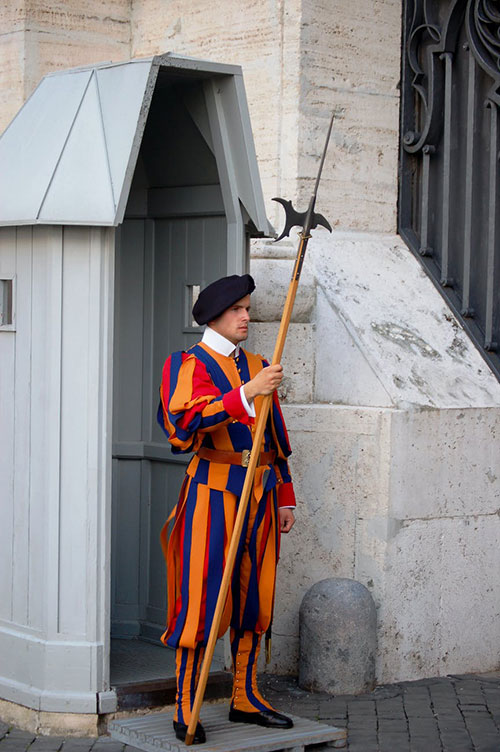 But the colors of the uniform aren’t the only distinctive features of the Pontifical Swiss Guard’s clothing. The official full dress uniform also includes a ruff collar, boot covers (gaiters) in the same color palette, white gloves, and either a black beret or a black comb morion helmet.

The standard guard’s uniform consists of a yellow, red, and blue tunic and breeches (with bands of fabric attached to the body of a garment as decoration and the reminder of the costume’s history), matching gaiters, a brown leather belt with a buckle that has a monogram “GSP” (for “Guardia Svizzera Pontificia”), a short dress sword, a black headdress (beret or helmet), and black ankle-high shoes. On the most special occasions, a half-armor or cuirass is worn over the uniform with a matching metal (silver, rather than black) helmet – it looks spectacular!

Fun fact! Since 2019, modern Swiss Guard soldiers started to wear specifically-made plastic 3D-printed helmets that are produced in exactly the same design and condition, so now all the black helmets are identical. They are replicas of an original 16th-century Halbardier helmet. Also, plastic headgear is lighter than metal and it’s much comfier in summer because the sun doesn’t heat it as much. Modern plastic helmets even have hidden vents to help the men cope with Italian hot summers.

For decades, the Swiss Guard’s uniform remained practically the same. Only the quality of the fabric changed, modern fasteners were introduced, etc – small details altered. But the cut, color palette, and accessories remain intact.

By the way, this tricolor outfit is not the only colorful Swiss Guard uniform. There are actually 4 various ensembles, depending on the rank of the person. 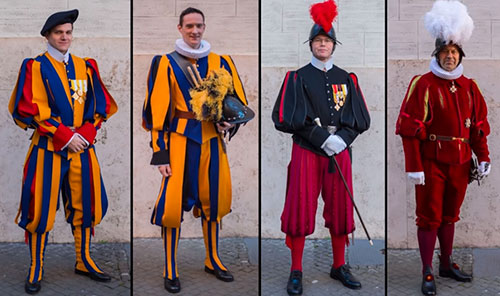 The yellow, red, and blue attire belongs to Halbardier soldiers or standard guardsmen.

The uniform of the drummers is very similar but the red color is replaced by black, so this uniform is in yellow, blue, and black shades. Also, this traditional costume includes a leather cross belt to hold the drumsticks. The plumes on the helmets are black&yellow.

Sergeants wear uniforms of the same design and cut but in red&black colors. The tunic is in black, with red sleeves and black bands over them. The breeches are red with red bands of fabric. The belt is black, not brown. The gaiters are replaced by red ankle socks. And the shoes are lower. Sergeants wear comb morion helmets as well, but with red plume.

And there is also the traditional uniform of commissioned officers, the highest-ranking Swiss Guards. They use the most royal-looking and elaborate apparel that differs in design. The tunic and breeches are made from dark-red velvet and gold fabric (rather than yellow), with gold embroidery on the tunic sleeves. The breeches are a bit tighter and without bands. A rigid ruff collar catches your attention. The belt is brown but more elaborate than that of an ordinary Halbardier soldier, it holds a long rapier sword. Officers also don’t wear gaiters, they use high socks with black shoes; sometimes read&gold cockades are added to the shoes. Officers’ comb morion helmets are adorned with purple or white plume.

The armor of high-rank Swiss Guard commanders is darker than those of ordinary soldiers, with more embellishments, and with fabric lining the edges of the cuirass parts.

In the colder weather or when it’s raining, the Swiss Guards add a black cloak on top of their attire. The design differs according to the rank of a soldier or officer and the purpose.

When you look at these colorful and catchy uniforms, there’s no doubt that this attire is used for special occasions. It’s festive enough and unusual enough to be very special. Among such occasions are the visits of foreign diplomats and high-status people, guard duties during holidays, and similar events. 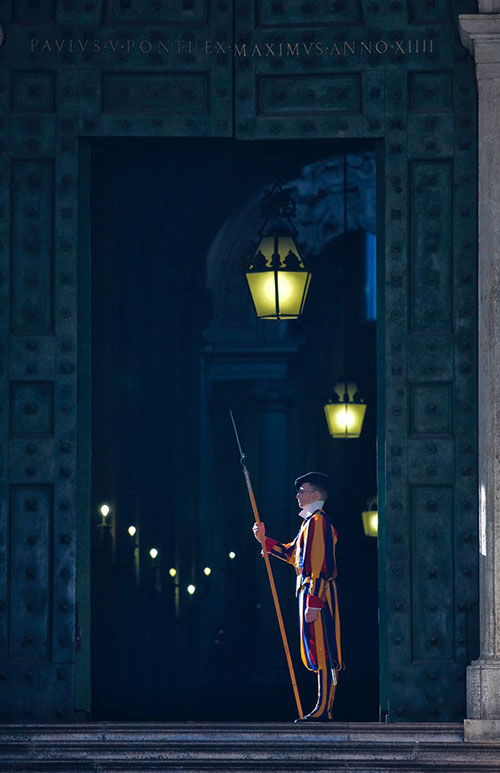 But also, as we’ve mentioned earlier, there are simpler day-to-day uniforms worn by the Swiss Guard. For example, during the training, night duties, etc, they use a blue outfit. A blue tunic with white flared collar, blue breeches of a simpler design, a black beret, a black or brown belt, dark-blue high socks, and black leather shoes.

The Pontifical Swiss Guard uses very unusual and attractive uniforms. They differ from most military uniforms around the planet. And after this post, you’ll be able to recognize Vatican military men when you see them and even tell, in general, their rank and position.