Belarus is one of those countries with a rich Slavic heritage. The folk costumes of this country are bright and beautiful, they look rather regal even. Here are the major features of Belarusian national male, female, and kid outfits. Also, we’d like to share with you a few interesting facts about Belarusian traditional clothing and its peculiarities. Particularly, why did the local brides wear embroidered shirts with whitework? what did people do with old, worn clothes 100 years ago? how did the traditional kid garments look like?

In Belarus, every region of the country had its own characteristic features in traditional clothes. For example, in southern regions, the national apparel was more colorful and decorated, while northern areas had darker folk costumes with fewer embellishments. In the eastern territories, women wore a garment called “saian” instead of the usual combination of a skirt, apron, and bodice. Saian is a dress – skirt and top sewn together.

In the past, traditional clothing was made only from natural fabrics – linen, cotton, hemp, nettle, wool, etc.

In Belarusian culture, embroidery always played a great role. People wore embroidered shirts not only for special occasions but also in daily life. It is traditional to embellish the sleeves, collar, cuffs, and hem of a shirt. But it is interesting that Belarusian craftswomen typically adorned most of the seams with embroidery as well – it was some kind of energy protection because people believed that seams were a place where evil could come through, so these places needed extra protection.

The shirts weren’t the only garments decorated with embroidery. A lot of other pieces also had embroidery – aprons, outerwear, headdresses, etc. And those garments which didn’t, had patterns woven into the fabric (skirts, belts, bags, etc.).

By the way, the traditional embroidery patterns for Belarus are rhombuses and other geometric ornaments. The most popular color is red; sometimes black, white, and combinations of these 3 colors can be found. Modern Belarusian clothing is embroidered with a variety of colors, including blue, green, yellow, etc.

The male folk costumes in Belarus were simpler and not as diverse as the female garments.

The shirts traditionally are embroidered at the collar (stand-up collar is the most widespread), cuffs, and shirtfront. The amount of embroidery is less than we see on women’s shirts. The length of a shirt is mid-thigh or below-the-waist. And the shirts are always worn belted with a narrow or wide woven belt.

The trousers were simple, without any ornamentation. They reached below the knee, but not to the ankle because people saved fabric. From the knees down, the leg was typically wrapped with linen or woolen cloth and bast shoes or boots were worn on top.

The outer garments were various – coats, jackets, vests, etc. They were often made from thick handmade wool, especially light-gray wool and adorned with some red embroidery. The coats usually reached the knees. They could be belted or fastened with handmade buttons.

The male and female outerwear were very similar, people often wore the same coat in one family. Only festive outer pieces of men and women differed a bit, but the main traits were the same.

If to talk about the headdresses, Belarusian men wore straw hats in summer and woolen or fur hats in winter.

The female traditional attire included an embroidered shirt, a skirt, an apron, a bodice (as we’ve already mentioned, the latter 3 pieces could be replaced by a dress), a belt, a headdress, and shoes.

Belarusian women of different ages wore slightly different clothing. Usually, some garments showed the marital status – like headdresses and embroidery patterns on shirts. So, there were typical costumes for a little girl, a teenage girl ready to get married, a bride, a married woman, and an elder woman. 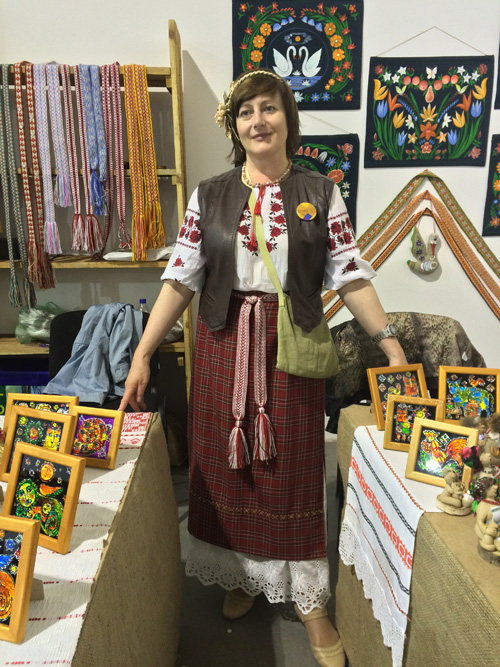 Modern Belarusian women’s outfit. It’s not very accurate but rather a stylized costume

The most decorated and ornate clothing was worn by the future brides and brides at the wedding. Their shirts were densely embroidered. They wore headdresses with colorful ribbons or/and flowers. They wore more jewelry.

Belarusian brides wore shirts adorned with a lot of white embroidery. Usually, red threads were also present, but whitework was mandatory. And it has a curious explanation – in Belarusian culture, marriage is compared with death because the young girl symbolically dies and the woman is born, with new life, new traits, new responsibilities, etc. And the white color – not black – symbolizes death (by the way, it is the same in some other cultures around the world).

Married women change their bridal shirts with whitework for the ones adorned with traditional red embroidery. Also, they start to use another headdress – a kerchief instead of colorful headpieces and wreaths. This kerchief is sometimes embroidered as well. Another popular traditional headdress is a wimple – long piece of cloth wound around the head and neck. It has decorative ends embellished with embroidery.

Another women’s garment used by grown-up females is called “paniova”. It is a woven wrap-around skirt, very complicated in producing. The woven patterns on a paniova sometimes are extremely complicated and labor-intensive. Usually, the woman made this garment by her own hands and thus displayed her skill in weaving. The yarn used to weave a paniova is traditionally linen and hemp for the background and wool for the patterns. The remains of paniova skirts were sometimes found in the 13th-century burials, so the designs used today go back at least 700 years. The paniova was worn together with an apron and belt.

Actually, there are 3 main skirt-like garments in Belarus: a paniova, a saian (one-piece dress made from sewn together skirt and top), and an andarak (expensive woolen skirt, long and wide). 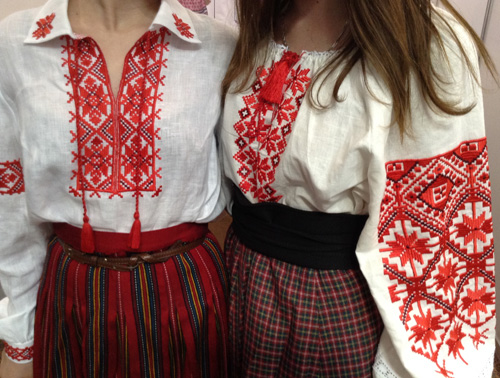 The belts traditionally used by the local women were narrow woven belts with various bright patterns on them. There is a large variety of such woven designs.

As to the shoes, Belarusian people mostly wore bast shoes and leather boots. But they also walked barefoot in daily life, especially in the warmer season.

Belarusian kids started to wear clothes that differed according to their gender at the age of 4-5 years old. Before that, their outfits were identical for both boys and girls – it was a long belted shirt.

The kid clothing was often sewn from old female shirts. As the shirt became worn and couldn’t be used by the woman anymore, they re-purposed it and used those pieces of cloth that were in better shape to sew smaller kid shirts.

When the child became older, he/she started to use additional (to the shirt) garments. They were trousers for boys and aprons or various kinds of a skirt for girls. With girls, it’s more complicated because women wore a large variety of skirts in different regions of Belarus, so the cut, shape, and design depended on the area. The first girl’s apron or skirt was often made from her mother’s one. Again, re-purposing clothes. In the past, people didn’t just throw clothing away as soon as they got bored of it, because the process of making garments was hard and laborious, so they tried to make the most of it.

Here are several Belarusian authentic costumes from the local museum 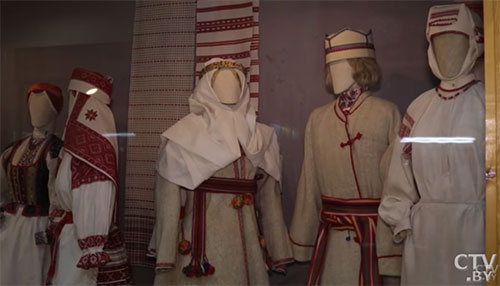 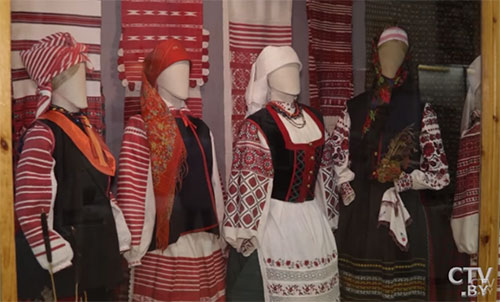