The Kazakh authentic costumes are extremely decorative and practical at the same time. Like any other traditional clothing, the folk outfits of Kazakhstan were historically created in accordance with the climate and natural environment, lifestyle, and beliefs of the local people. As Kazakhs are nomadic people and they live in rather harsh climate conditions, their clothes are comfy, durable, and have a high protective capability. But also, these garments are very nice-looking and ornate. The national clothing is sacred for Kazakh people, they even have numerous traditions regarding clothes.

The Kazakh clothes in traditional society, as in any other cultures, performed several functions. The main pragmatic function of clothes is protection of man from influence of the natural environment. But besides that, a traditional costume had the most important identification function – by how and what a man wore, it could be possible to define not only sex and age but social status and clan belonging. 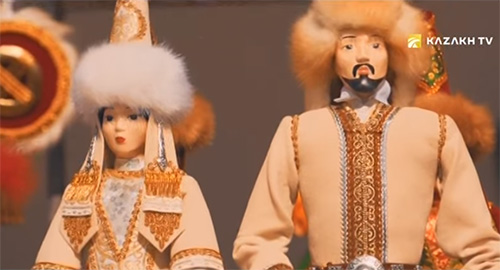 In the middle to the end of the 19th century, the Kazakhs – when making outer clothes, footwear, and headdresses – still used traditional homemade materials: skins, leather, and thick felt. In the 19th to the beginning of the 20th century, complex of men’s and women's clothing was quite steadily and homogeneous all over the territory of Kazakhstan. The composition of the costume and principles of cuts remained almost invariable. The social differences in clothes were shown, first of all, in choice of material and in quality of making. 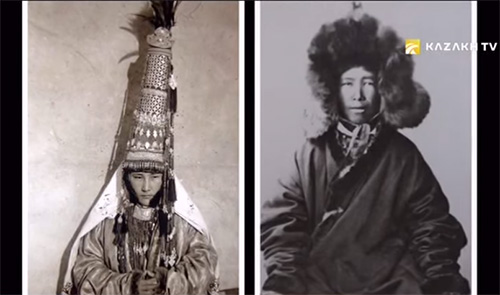 In the ancient cemeteries, we can find out from the ancient archaeological discoveries, on the basis of priceless sources, the details of the ancient ancestors’ clothes. 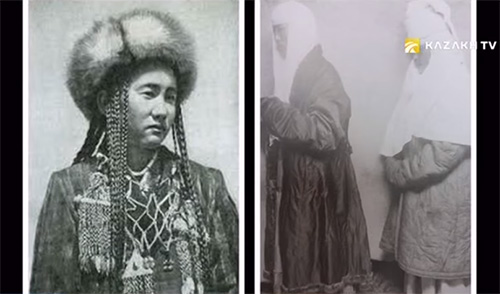 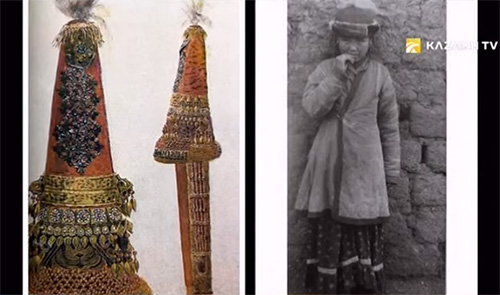 Among the researchers of the nomadic people's clothes, is the great work of Mikhail Gorelik. He studied the clothes of the Scythians, Turks, Kipchaks, and Kimeks, which inhabited the ancient territory of Kazakhstan. These studies gave the foundations for the evolution of development and evolution of Kazakh clothing. 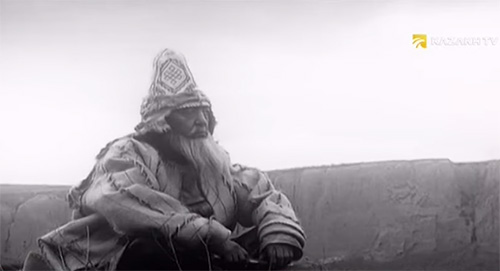 In 1969, the “Golden Man” was found 70 kilometers from Almaty. In this burial mound, a skeleton was found and it's believed to have been an 18-year-old Scythian warrior prince, dating back to the 3rd or 2nd century. 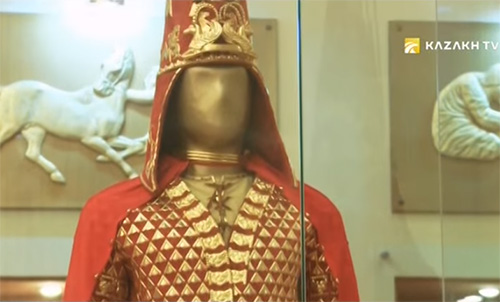 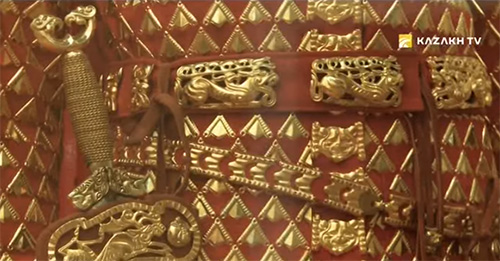 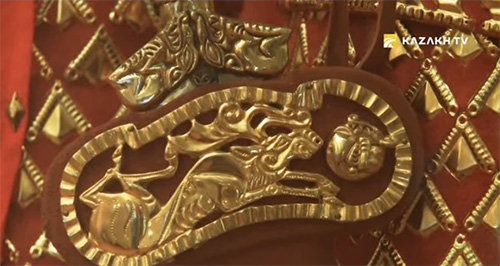 At the same time, it is possible to notice that Hun, Sarmatian, Turkic, and Kipchak tribes’ clothing samples have specific features, decorative and meaningful. 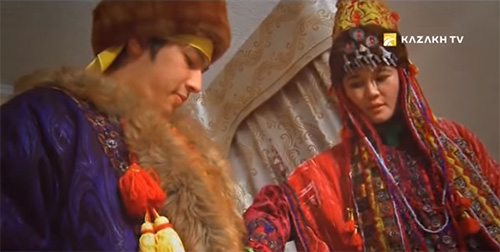 “The history of clothing is very profound and every detail of the clothing is also comfortable for everyday life and for some occasions. That's why I think it's good to know the history of traditional clothes. All Kazakh clothes are made of pure and natural materials. The fabric – cotton and silk – are natural. Our ancestors also used fabrics from wool. Their jewels were from real gemstones. That's why our national clothing is rich”, explains Yerkezhan Omarova, candidate of technical sciences, craftswoman.

A famous ethnographer Uzbekali Zhanibekov wrote a book about the Kazakh costume. The author emphasizes the national dress is the source of the ancestors, the achievement of the culture, and they should be preserved as a monument. He wrote about the importance of national clothing, and the names of each type of clothing are also mentioned there. The regional description of each clothing as livestock wear, martial arts, wedding dresses, outerwear, headwear, footwear, and clothing decoration were written in his work. And author directs our attention to the rich heritage of Kazakh nation – the ornaments which should be on clothing, and about their distinction.

“Our people made wonderful things with elegance while knitting clothes. The reason is, every mosaic is decorated with the same elegance and accuracy with golden threads and jewelry. After 1936, the creation of large ornaments on clothes have taken a singular place in those years. The ornaments are made for decoration and on clothing as well. In the 20th century, the Kazakh national costume was forgotten. And later, it started to be revived in the following century. There was a big difference in the clothes of adults, men, girls, and brides – the difference was in their age”, says Tokkozha Kozhagulov, candidate of pedagogical sciences. 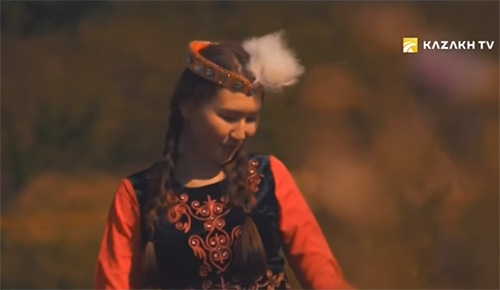 The national costume of any country has always been the epitome of local beliefs, legends, history, and culture. There was no exception in the Kazakh national costume, created for years and harsh conditions of the steppe nomads. The researchers say that Kazakh national clothing arose from the ethnic, economic, social, and natural environment. The elegance and beauty to the local dresses were given by fur trim, embroidery, and jewelry.

The traditional materials for the clothes were leather, fur, thin felt, cloth, which were used by the local population. Clothes sewn from imported materials (like silk, brocade, and velvet) were kind of measure of wealthiness of their owners. There were different headwear pieces in every tribe. It depended on the region where people lived. 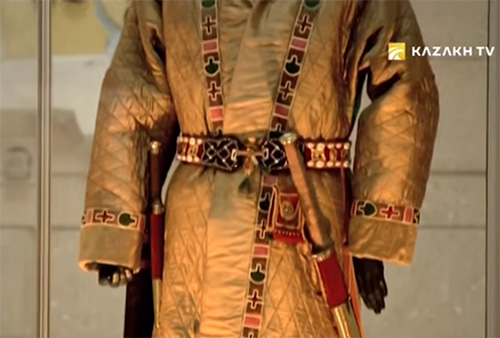 “We have one-day special clothing. This is a fashionable garment, usually, people wear such clothing for weddings and other ceremonies. Today, we have clothes for everyday life. Our teachers prepare clothing for everyday life – they are stylish and include national motifs of our ancestors”, adds Tokkozha Kozhagulov, candidate of pedagogical sciences.

Well-known Kazakh ethnographer Zhagda Babalyk wrote that, in ancient times, hans wore embroidered headwear. It was named “muruk kalpak”. Kazakh men used to wear different scull-caps “taqiya” – summer and winter hats. Summer hat “kalpak” was sewn from thin felt, mostly white, and had a specific ancient cut. “Borik” and “tymaq” were worn in winter. Tymaq is a warm winter hat with ear flaps and neck flaps made from fox, which is popular among Kazakh men even today. “Bashlyk” is another national headwear made of camel cloth, which was supposed to be worn on top of other hats to protect from dust, sun, rain, and snow. 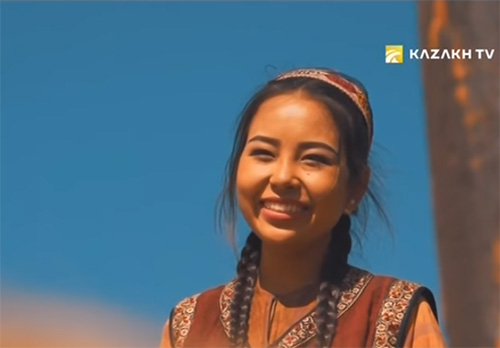 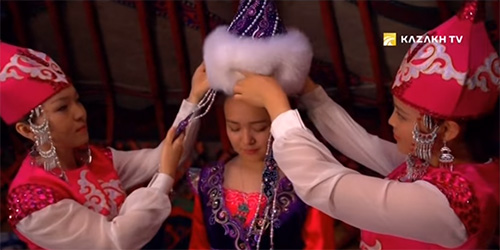 “The Kazakh people are very rich in clothing, specially embroidered national costumes. First of all, the ornaments were embroidered, then craftswomen started to sew. At the age of 17 to 18, the girls’ dowry was prepared and their clothing embroidered as well”, narrates Raushan Kanapiyanova, candidate of pedagogical sciences.

According to ethnographers, the Kazakh people's clothing was widespread in the past. Men's clothing consisted of the following components: double under vest “zheyde”, lower pants made of light fabric and upper pants made of cloth, suede, sheepskin, or thick cotton fabric. From the early ages, when the Kazakhs used to go horseback riding, trousers were a necessary and important part of their clothing. The main type of outer clothing was “shapan”, a kind of robe. 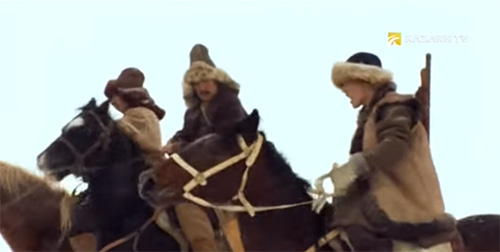 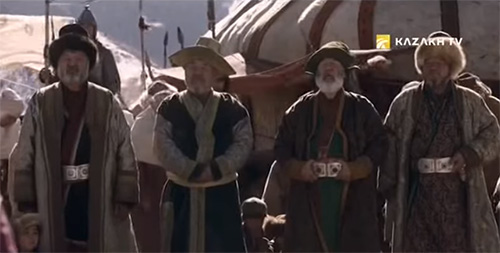 In old times, men's and women's footwear were also similar, though girls’ boots were often decorated with embroidery and applique work. Footwear differed according to seasons, for example, winter boots were tall, broad-shaft, worn over the felt stockings. Also, there were differences between footwear of older and younger people. Young people often wore boots with high heels (up to 6 or 8 cm), older people – with low heels. Another common type of footwear among the Kazakhs were light boots without heels, tight-fitting on the legs, called “masi”. Leather overshoes were worn over them, which were supposed to be put off at the entrance to the house.

There are some feathers that should be worn in headwear as they have their own meaning. For example, the “Golden Man” also had in his headwear 4 golden feathers. A picture of the man who was wearing a headgear was depicted with a feather on the stone. In general, wearing a feather is from mythical belief – they connect human spirits with the celestial world. 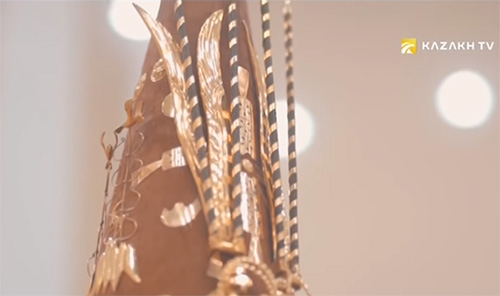 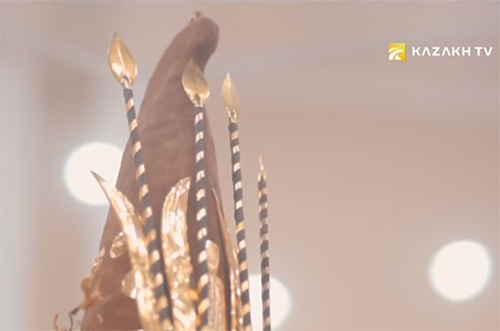 Kazakh people have a special respect for headwear – it is not allowed to be scattered anywhere and person’s own headgear can’t be sold or presented, as your happiness and luck may disappear with your headdress. Women always paid high attention during the sewing of headdresses, and currently, craftswomen also have their own methods and they teach the young generation.

There were their own rules and traditions of wearing clothing in the steppe. For example, if two people were lost in the storm and one of them probably wore coat from wolf leather, then the relatives of the deceased had the right to take the coat of a man who was next to the deceased man, as two men are able to cover in one coat from wolf's leather. This was their own special tradition among the rich, wealthy people in nomadic tribes.