The traditional costume of Japan, the kimono, is an elegant garment that makes a woman look her best. With their wide variety of seasonal designs, kimonos reflect Japan's rich natural beauty. The cut of a kimono is very simple, but at the same time, this garment is sophisticated and beautifully embellished. A big role in the design of modern kimonos played the 17th-century prohibition against displays of luxury. Because of these bans against laborious kimono embroidery and tie-dyed fabrics, the design of this gorgeous Japanese garment has changed big way.

The obi, the sash, makes a kimono even more gorgeous. More than 3 meters long, the obi is tied in a beautiful and often elaborate knot.

Yet, even the most sumptuous kimono is constructed quite simply: just 8 rectangular strips of fabric sewn together.

The origin of the kimono as we know it today, was an undergarment worn in ancient Japan. Later, during the days of the samurai, authorities tried to ban extravagant kimonos and they unwittingly inspired a kimono revolution.

In the early 20th century, kimonos with bold new designs appeared. They look fresh even today and are enjoying popularity with a new generation of young women. These kimonos are called “Meisen kimono”.

“This is my own kimono, I've had it for quite a long time. Unfortunately, I can't put it on without assistance, but when you're wearing it, it definitely improves your posture, makes you feel a bit dignified. These days in Japan, you don't see that many people wearing kimono but when you do see somebody walking around the town in one, it certainly looks very stylish”, says Peter Barakan, host of the series Begin Japanology.

A woman looks beautiful in a kimono. But there are a number of special rules to wearing one. Married women and unmarried women wear different kimonos.

A single woman wears a broad-sleeved kimono on formal occasions, like the New Year or the annual official coming-of-age ceremony. These kimonos are always eye-catching, they're decorated with dyed and embroidered patterns, and the sleeves are so wide that when you put your arms at your sides, the sleeves almost touch the ground.

The most formal garment for a married woman is a narrow-sleeved kimono worn at events like family weddings. Its base color is black but it has a luxurious design on the skirt. The family crest is displayed in such places as the upper back and the sleeves. The narrower sleeves symbolize that the woman, wearing it, is now married. This kind of narrow-sleeved kimono became formal wear in the early 20th century. It’s said that the trend was inspired by formal Western attire.

For semi-formal occasions, both married and unmarried women wear a so-called “visiting kimono”. Unlike the formal narrow-sleeved kimono, the visiting kimono has lavish designs on its shoulders and sleeves, as well as on its skirt. Visiting kimonos are often worn to tea gatherings, parties, and other social visits, hence the name. 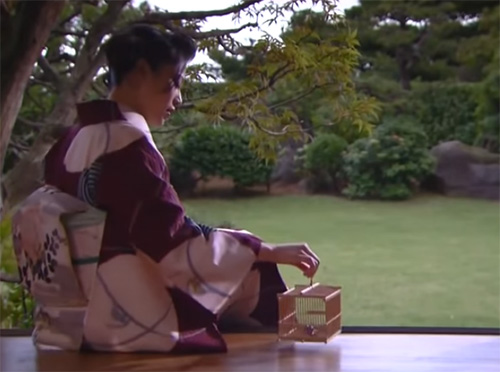 It's extremely important to wear the right kimono at the right time and place. This includes observing many conventions that have to do with the seasons of the year. From October to May, when the weather is colder, kimonos with a lining should be worn. From June to September, when it's hot, is the time for kimonos without any lining. And for the hottest days of summer, there are kimonos made of gauzy silk. This kind of kimono makes not only the wearer feel cooler but also the people looking at it. A kimono should always reflect consideration for those who will see it.

How is kimono made

Kimonos are constructed using a special method. Before the kimono is sewn, the fabric is ironed to align and tighten up the weave of the fabric. This is an essential task.

“All the fabric comes to us with the weave stretched out. If we sewed the fabric without tightening up the weave first, the fabric would shrink later on. We do this ironing to prevent it from happening”, explains Kazuhiro Kimura, kimono maker. 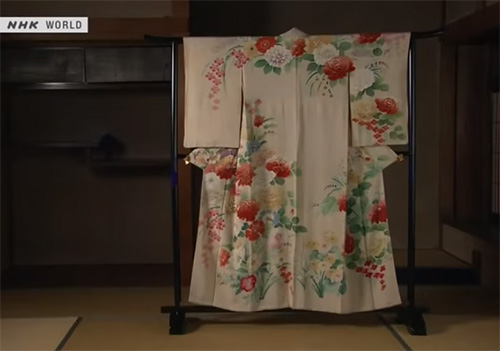 The kimonos may look complicated but constructing one is actually very simple. Let's put a kimono together, one section at a time. This is the body of the kimono, and here are the sleeves. Finally, trim pieces are added to the collar and on the front. And you have the completed kimono. 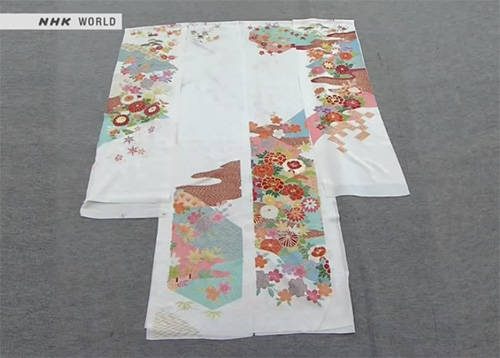 There is a special method for sewing together the strips of fabric. This tailor uses her toes to grasp the fabric as she pulls it taut. Virtually, all the seams of a kimono are sewn in straight lines and at right angles. The result is a beautiful garment. 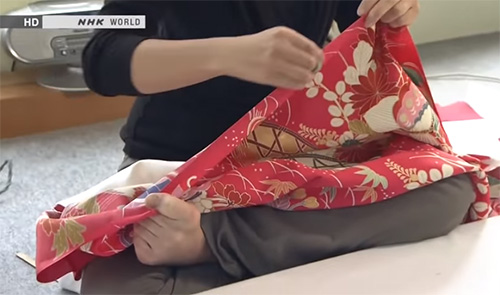 Another important part of kimono making is showing off the designs.

“The most visible part is the chest. The left side of the chest is where the focal point of the design should be. The second focal point is the area below the knees”, says Setsuko Sugawara, craftswoman. 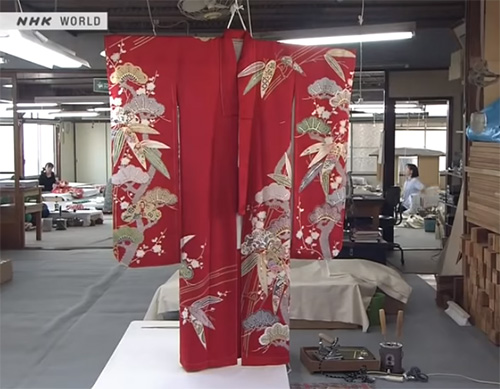 Because the structure of a kimono is simple, you can unstitch the seams and take it apart to wash it.

Looked after with proper care, kimonos can be passed down from generation to generation.

History of kimono and obi

There’s a long history behind the tying of obi and the wearing the kimono in general. Let's go back now and take a look at some of that history.
The history of the kimono dates back around a thousand years. Aristocrats in those days wore garments with many layers. The innermost layer, which has narrow sleeves, served as underwear, and it was this layer that became the origin of today's kimono.

In the 14th century, when the samurai came to the fore, this narrow-sleeved inner kimono began to be worn on top. It was a practical way for men of action to dress. Ultimately, it became the standard costume for both men and women of the samurai class. 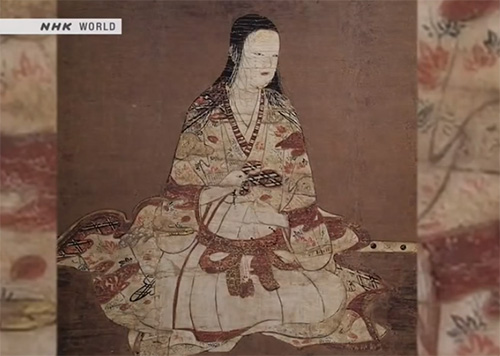 In the 16th century, there was an explosion of kimono fashion. Among women of the samurai class, exquisitely woven, dyed, and embroidered kimonos became the trend. And in time, this kind of kimono fashion spread to wealthy merchants and also courtesans.

One style, in particular, proved a great hit – the classic narrow-sleeved kimono. In this style, the whole garment is the canvas for a large dynamic composition.

As kimono style matured, the obi – which had originally been nothing more than a cord – grew wider and longer. Obi began to be dyed and decorated with woven patterns and embroidery.

Then, in 1683, came a pivotal event in the history of the kimono – the Shogunate issued a prohibition against showy displays of luxury. This included a ban on ornate kimonos. Gold embroidery was deemed wasteful and was forbidden. Even ordinary embroidery was banned. And so was fabric covered with tie-dyed speckled patterns. To make these, the fabric had to be tied up into countless tiny nubs – a very labor-intensive process. The technique itself was also considered to be extravagant. 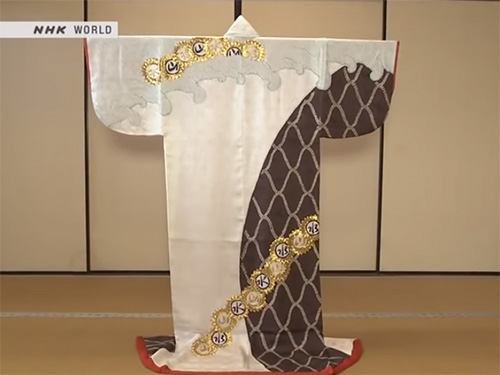 These laws launched a new era in the history of the kimono. It started in Kyoto, with the birth of a brand new technique. It's called “paste resist dyeing” and it allowed colorful compositions to be drawn straight onto the fabric, without embroidery. The outline of the design is traced in paste with a brush. Then, the colors are filled in. The paste acts as a barrier, preventing colors from bleeding. After the colors are applied, the fabric is washed. This removes the paste, leaving white outlines. This new Kyoto dyeing technique got around the Shogunate's rules. 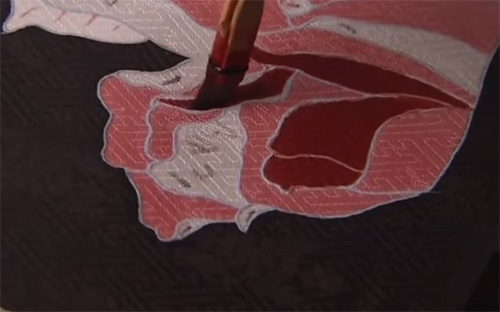 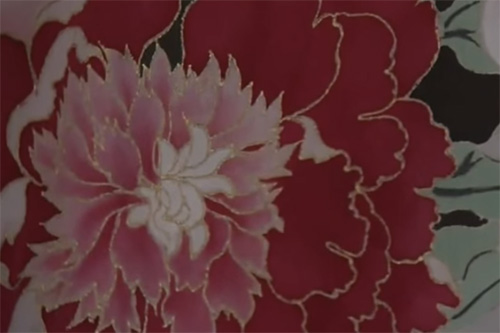 Meanwhile, another fashion revolution was happening in Edo, the Shogun's capital. The people of Edo came up with their own chic sensibility. The style is reflected clearly in women's kimonos of the time. There was a shift from bold hues and designs to subdued colors and sleek designs. The new fashion was about understatement. This style of kimono has its design mainly near the bottom of the road.

This simple composition shows boats against an indigo background, which represents a river. It epitomizes the sleek Edo style.

Many kimono design techniques that still exist today, were first devised to get around official restrictions.

On this one, you've got little mini maple leaves – in autumn, you've got plum blossoms – that's winter, I suppose, and then cherry blossoms over here, so it’s spring. You've got the 3 seasons that this kimono would be being worn. That's beautiful. 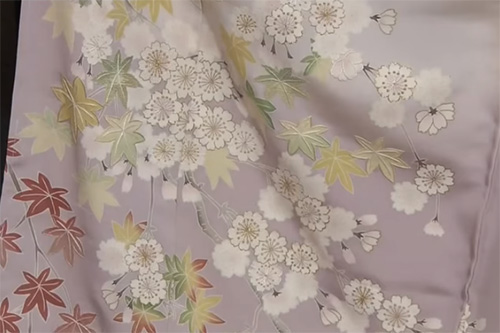 You get an idea of the vast variety of designs available in kimono materials. Although, it's probably easier to imagine how they're going to wind up, when you see them fully displayed, rather than in rolls.

And we have two types of material here, which look from a distance as if they're just plain, but if you look closer, you'll see that there are some wonderful, very, very intricate designs. These are called “Edo Komon”. People came up with them during the time when luxurious kimonos were banned because they still wanted to dress stylishly. And out of that desire, their skills developed to the point where such intricate designs could be made.

This one was dyed with a stencil and it's a pine needle pattern.

And this one was inspired by sharkskin. 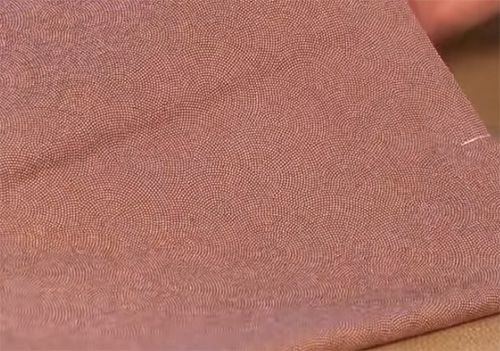 As we've seen, young women are starting to wear kimono again for fun. And although they have an image of being expensive, which indeed they can be if you buy them new, if you go out to places like flea markets, you can pick up perfectly good kimono for surprisingly low prices. They still do have an air of formality about them at times and it's a little bit of a shame that people don't wear them more casually.