Moccasins are widely used traditional shoes of the Native Americans. The size, shape, style, and adornments of this folk footwear can be different, according to the region of origin, tribal customs, available local materials, and simply the taste of the artisan. Still, the pair of moccasins we’ve prepared for you in this post are shaped rather oddly and unusually. These charming Native American moccasins from the early 19th century have a bit of a homey look, and the beaded designs on them are really cute.

These Native American moccasins are from The Met (The Metropolitan Museum of Art in New York).

These moccasins were made by women from the Muscogee (Creek) tribe in the 1830s. According to The Met, these shoes are made either in Georgia or in Alabama, the US. They’re made from a single piece of dyed animal hide. They have a center seam and no fasteners or lacing, due to which they’re easily put on and taken off. The border of the “bootleg” is adorned with a nice rosy silk ribbon. 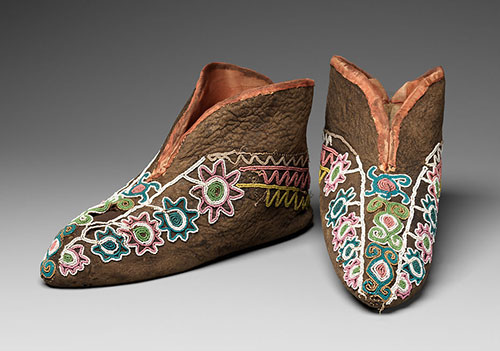 Such a pair of festive shoes was probably worn for special occasions. They are beautifully embellished with beadwork in floral and zigzag patterns. The seed beads used here are colorful tiny trade beads and metal beads (rare and costly beads in the 19th century). 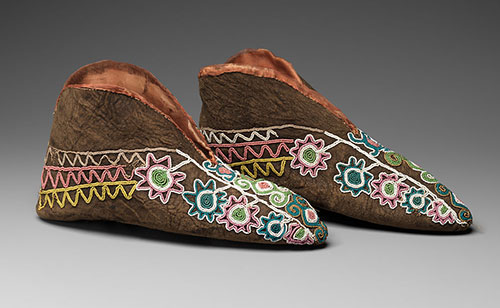 By the way, the beading technique used to create these patterns is also interesting. The beads were strung on a cotton thread with a stiffened tip and then this thread was sewn to the leather. This way, you didn’t have to secure every bead, so it was easier and faster to make the beadwork.