The traditional dress of Panama looks very ornate and beautiful. It is made in the same style as other Latin American folk outfits but looks somewhat more delicate because of the amount of white fabric and lace. Usually, the dress is white with colorful prints. Also, the head adornments add sophistication to the look. This traditional attire was formed by a mix of several cultures, as Panama historically was a boiling pot of cultures and traditions from different continents.

The culture of Panama has the influences of the local indigenous tribes, European settlers, and African slaves brought here. So, the traditional costume of this country has a lot of interesting and lovely features.

The female folk attire in Panama is called “gala pollera” or just “pollera”. This design originates from the central provinces of Panama. The costume includes a wide flounce skirt, a flounce blouse, opulent tembleques for the hair, and a variety of jewelry. 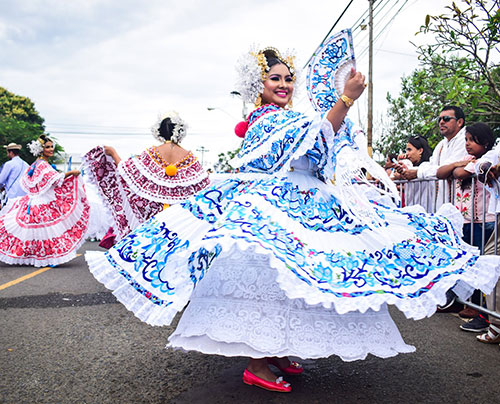 All pieces of apparel are typically handmade, created by local artisans, and are passed from one generation to the next inside the family. They are treasured belongings and can be rather costly.

The blouse called “blusa” and skirt called “pollerón” of gala pollera are wide, tiered, and flounced or ruffled, with a border decorated with lace. The blouse has a cape-like design, so during dancing, it repeats the skirt’s rounded shape. It can be short-sleeved or long-sleeved.

The skirt is worn over a lace petticoat. A Panamanian pollera can be plain white, but more often, the outfit is white with red or blue, or violet, or pink prints. The patterns on the shirt and skirt are not random, they’re also traditional and created using the local folk craft techniques.

The headpiece or rather hairpiece worn with a gala pollera consists of multiple items – the tembleques (elaborate constructions made from seed beads and beads) that shimmer when the woman is dancing, decorative hair combs and hairpins, etc. Sometimes, flowers and jewelry pieces are added to the pile. The tembleques are pinned at the sides of the head, creating a beautiful and ornate shape around the head. In most cases, the tembleques are pure white with golden combs and pins, but also, the beads can be colorful.

The last part of a Panamanian folk dress is a generous jewelry set. It consists of multiple necklaces in various designs, pendants, earrings, bracelets, etc. The amount of jewels is rather large. And their cost depends on how wealthy the family is. Some pendants can be embellished with turquoise or other semi-precious stones, with glass beads, with pearls. 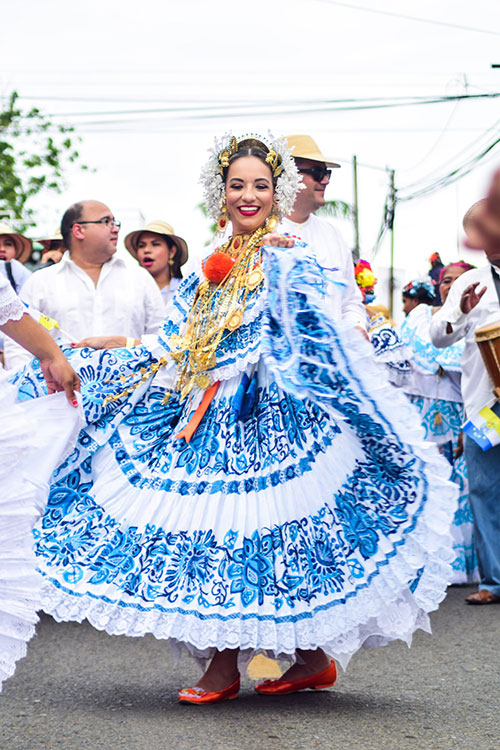 The whole traditional lady’s attire of Panama looks regal and eye-catching. It doesn’t accentuate the curves of women, like some other folk dresses around the world, but no woman can look bleak and undistinguished in this attire. And when Panamanian ladies dance in these outfits, it’s truly a sight to behold.