A lot of people think that the folk clothing in Greenland is very simple and roughly made from animal skins only, but you’d be surprised at how colorful and richly decorated these outfits are. Skillfully-made floral embroidery, large beaded jewelry pieces and trimmings, fine silks, and, of course, various fur – all of this and more you’ll see on Greenlandic national costumes. They are more vibrant and detailed than seems possible for such a harsh, although picturesque, environment.

Greenland is a large country and its traditional clothes differs from region to region. Basically, there are 3 main ethnographic areas – North Greenland, East Greenland, and West Greenland. Each of them has its own peculiarities in folk attire and its own clothing traditions. 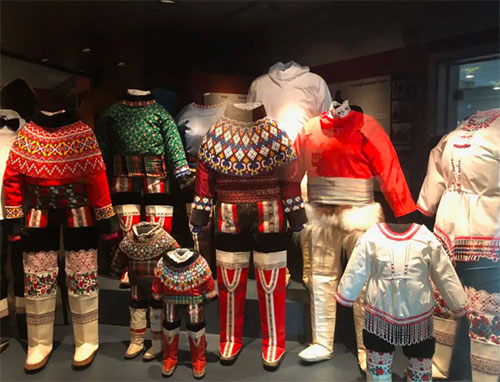 Greenlandic outfits from different parts of the country. White women’s and girl’s costumes on the right are from East Greenland, male red&white outfit with fur pants is from North Greenland, 3 adult and 2 kid costumes on the left (with yokes and colorful boots) are from West Greenland. Photo from the Greenland National Museum

North Greenland is the most secluded region with the most severe climate conditions. So, the local traditional garments are usually created of animal skins and are extremely warm. Typical pieces of clothing here are long white kamik boots made from bear skin, polar bear fur shorts, fox-skin trousers, high fur boots, etc. The outfits of North Greenlanders, which are locally called “arnatuut”, are often white or off-white.

East Greenlanders use both animal skins and fabric. Their folk dress is called “tunumiutuut”. And it usually consists of a white anorak adorned with beads, dark pants, and high kamik boots richly adorned with floral embroidery and lace.

The anorak is a Greenlandic tunic sewn from canvas, silk, or satin. Also, it can be woven from wool. It can have a hood, embellished breast pockets, or simple side pockets. Sometimes, people wear simple anoraks or decorate them with beaded trimmings, sealskin applique, and embroidery.

Interesting fact about folk dress of Greenland! This is probably the only country in the world where both men and women traditionally wear trousers. No skirts for ladies. And in such a cold climate, it’s understandable.

Another curious fact! The female national costume includes shorts rather than long trousers. These shorts only reach the fur boots – they simply don’t have to be longer. But when a woman sits, sometimes parts of her bare thighs peek between the shorts and boots.

Greenlandic kamik boots are so very colorful and unique. From the first glance, people often think, these boots don’t belong here. And actually, such vivid decorations on kamiks appeared only in the 18th century, when Moravian missionaries came to Greenland from the territory that is now Germany and lived here in exile for a long time. Moravians made a large impact on Greenlandic culture. They taught the local women to create colorful floral embroideries (very European-looking, even Slavic-looking) and delicate lace patterns. Centuries later, Greenlanders from the east and west of the country still widely use kamik boots richly adorned with these folk craft techniques.

The yoke is a wonderful jewelry piece. It is made from seed beads arranged in beautiful patterns. By the way, these designs have a Norse origin and were incorporated in Greenlandic culture after the Viking visits. Vikings also brought wool to the country, which quickly became one of Greenlandic favorite fabrics because it’s warm, durable, good-looking, and keeps some warmth even when wet. Greenlandic sheep have thick long wool, perfect for weaving.

But let’s return to the yoke. This collar is made from imported glass or pearl beads, so Greenlanders had to buy them from merchants. First yokes were a lot smaller than modern pieces, as seed beads were expensive and you needed hundreds of them in different colors to create one yoke. A yoke was a status thing in the past – the more beads you had, the higher your position and status. But with time, when beads became cheaper and more available, yokes turned into large and opulent collars that cover women’s chest fully and reaches almost to the elbows. Today, any Greenlandic lady can buy or make a yoke for herself in any design she wants.