Many indigenous African tribes have a tradition to adorn their clothes, jewelry, and accessories with beads. Beadwork is a significant part of African folk culture. And Zulu people are among those communities very skilled in beading. One particular lovely accessory of Zulu cultural heritage is a beaded belt called “umutsha”. It’s sad that a large amount of knowledge about the symbolism of umutsha belts is already lost. But these beautiful, artful belts need to be preserved and remembered.

In the early times of human history, African tribes used shells, animal teeth, bone particles, and other natural materials to make beads – they made holes in them and strung on a cord or sinew. In the 18th century, the local people started to use glass beads imported from Europe, but at first, such decorations were rare and costly, so only the royals and wealthy Africans could afford to adorn themselves with glass beads. Closer to the end of the 19th century, the amount of imported glass beads increased, which made them available for ordinary members of the tribes. Even today, in the 21st century, most of the African traditional jewelry items are created from various glass beads – this craft is strongly incorporated in African traditional culture.

The most popular beaded items of African clothing are traditional belts, bags, headdresses, and jewels. But, of course, the main garments are also often embellished with beading – dresses, loin-cloths, tops, aprons, etc.

There is one particular interesting beaded accessory used by Zulu men and women – a beaded belt called “umutsha”. The main body of this belt is made from a piece of leather or cloth, but it is decorated with beadwork so densely that you practically don’t see the leather or fabric, only colorful beads sewn to the belt.

The patterns created by the beads are diverse. Some of them are geometric, others are more complicated and intricate. There are also belts with rather simple beaded designs. Anyway, there is actually a symbolic meaning to the look of these umutsha belts. The colors and marks are symbolic, but, to be accurate, people of a certain tribe or community often attached their own sense to a certain color or symbol, so we can’t make any general assumptions as to what a particular pattern means. The meaning can be different for different people. And also, unfortunately, a large part of this old knowledge is lost by now even in Zulu communities. As always, with time, some part of the traditional heritage gets lost, especially as the world becomes more globalized and the traditions turn into old-fashioned things.

The structure of a traditional umutsha belt is diverse. Some are flat rectangular pieces, others can be made from several rolls of beaded leather attached together. The last variant is very typical and popular for Zulu people. And by the way, the number of such beaded rolls might be up to 5-8. 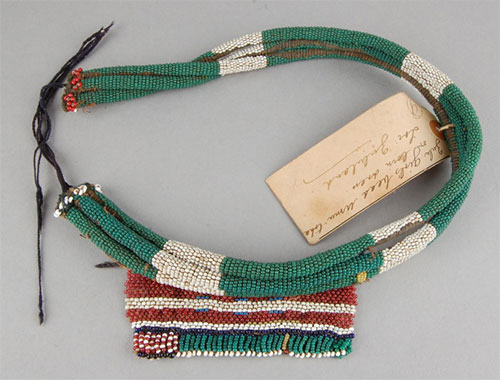 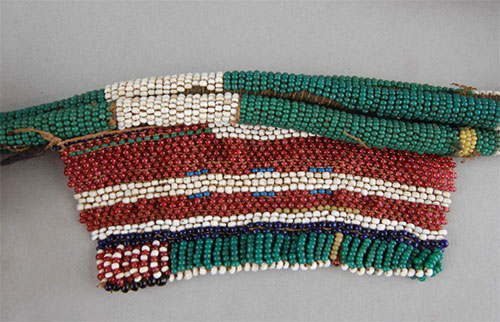 Zulu glass beaded belt from the early 20th century. It is crafted from green, white, red, and blue glass beads. Originally, was a part of Zulu traditional female attire. © The Trustees of the British Museum

Usually, umutsha belts are fastened with leather straps or with brass buttons. These traditional belts also could be embellished with other decorative elements, like metal beads or plates, bigger glass beads on the ends of leather straps, etc.

Zulu umutsha belts are traditionally made by women. They create beaded belts for themselves, their husbands, children, and other close family members.