Kenyan traditional accessories – beaded headdresses and shoes made from rubber, leather, and wood

Many indigenous tribes around the world use traditional techniques of beadwork to decorate their headpieces, bags, and to make jewelry. And African peoples – Kenyans among them – are also extremely skilled in beading. They create wonderful headdresses covered with beadwork patterns. Another typical feature of Kenyan accessories is that these people have learned to use any available material to make the needed pieces of clothing in their hot and resources-poor environment. That’s why such materials as wood, plant fibers, car tires, animal hides, and bird feathers are traditionally used to make shoes, headdresses, bags, belts, etc.

There are several folk headpieces in Kenyan traditional culture. The most pretty, high-status, and curious Kenyan headgear items are ogut tigo, arash, and ligisa.

It’s a round skull-cap with a flat top, on a rigid frame, and adorned with thousands of tiny colorful beads that create tribal patterns. This headdress was typically used by male elders of the Luo people (one of the largest ethnic groups that lives in western Kenya). The cap is made from cotton or raffia fabric (natural cloth from the fibers of raffia palm leaves). The fabric covers a rigid frame made from thin sticks bent and tied together to create a round shape. The surface of cotton or raffia fabric is densely covered with beading that creates traditional ornamentation with simple but meaningful symbols.

Another headpiece worn by the elders – this time, of Turkana people – is called the “arash”. This headwear is very different from the previous one. It consists of a thin leather band with holes punched in it and feathers inserted in these holes. The feathers are specifically arranged by size and color to achieve a certain look.

But not only Kenyan men traditional wore ornate headpieces. This accessory is typical for Luo high-status women. It is a wide band made from several narrower circles woven from plant fibers and attached together. The outside of this band is richly beaded with colorful beads (most often, white, blue, red, and yellow). Also, cowrie shells are sometimes used to embellish the ligisa, along with seed beads. This headpiece was traditionally used by married elderly women of high status, for example, chief’s wives. 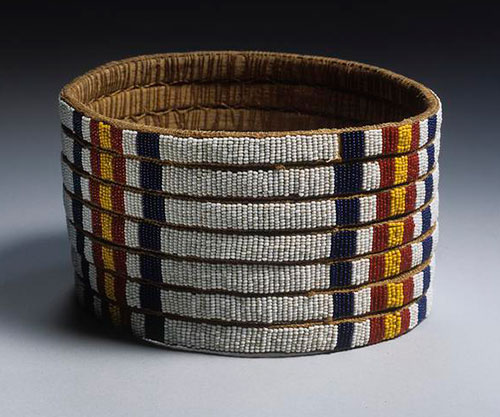 Original Luo ligisa headdress from The Horniman Museum and Gardens

Kenyan folk footwear is usually simple, cheap, and made from available materials.

These traditional shoes are worn indoors. They’re made from wood and can be rather cute. Some mitawanda shoes are very simple and crude, others can be adorned with beautiful carving and the knob between the big and index toes is decorative. The thing is, these shoes don’t have any straps or the top part at all, they hold on to the foot with the help of a wooden knob that goes between the big and index toes (a bit like thong sandals but with no strings). Often, the mitawanda are made in the shape of a foot. They can be flat-soled or heeled. These shoes are typical for Swahili people.

All these are different names for the same footwear, it is called differently in various regions of Kenya. These shoes are made from old car tires – the rubber is durable, cheap, and is perfect for the Kenyan environment, as it protects people’s feet from thorns, hot sand, insects, etc. So, akala shoes are very popular in Kenya even today. They resemble flip flops or sandals in design. The sole is rubber and the straps can be leather, rubber, or other material. 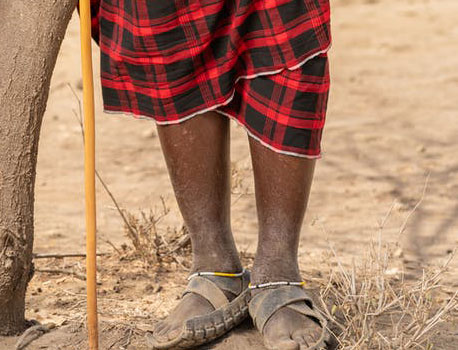 These shoes were invented long before rubber appeared. They’re made from leather – the sole from buffalo rawhide and the straps from softer leather. Such footwear is perfect for Kenyan nature and lifestyle. They’re durable, strong enough to protect the feet, and comfy thanks to the straps that hold them in place.