In many African countries, the traditional costume requires meters and meters of colorful fabric decorated with African ethnic motifs, intricate head ties, and multicolored beaded jewelry. Some tribal outfits still consist only of small loin-cloths and plenty of beaded adornments, which have been traditional for many centuries in a row, but at the same time, we mostly see large loose robes, modest dresses, and male tunics + trousers as African national clothing these days. And in this post, we’ll have a closer look at Senegalese traditional attire.

The main folk garment in Senegal is called a “boubou”. It is a wide unisex robe. It takes 9-12 meters of fabric to make a boubou. And usually, this garment is very ornate and regal-looking.

Senegalese formal outfit is called a “grand boubou” or “complete boubou” and includes not only the main robe but also a tunic and trousers underneath. A boubou typically is an outer garment, it is worn on top of other clothes, not on a bare body.

In the past, boubou was handmade and hand-decorated, which demanded a lot of time – months actually – because the robe is large and can have plenty of embellishments (embroidery, beadwork, dyed prints, etc). Today, most boubou robes are industrially made or at least sewn with a sewing machine, but still, handmade boubous are estimated higher. And surely, they’re rather expensive. That’s why a fine boubou was and still is something to be proud about.

In Senegal, male boubou garments are usually made from light fabric in not too vivid colors – beige, gray, brown, blue, etc. The robe has a round or triangular neckline and some amount of embroidery or other decorations on the chest. 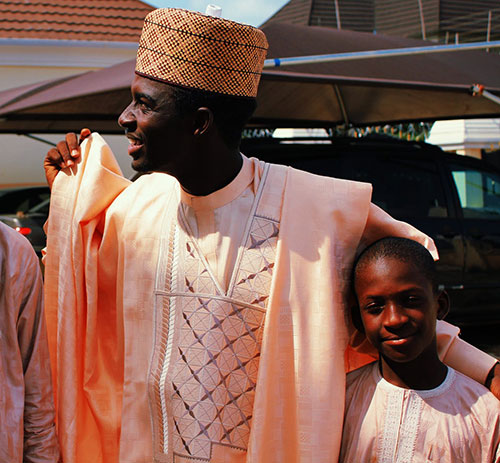 This is Nigerian boubou or agbada, but its appearance is very similar to Senegalese boubou

Male simple boubous are much more fitting, they sometimes are similar to a shirt or loose robe, without any excessive fabric. While male grand boubous are very wide, probably 2-3 times bigger than the body.

Female boubous are more colorful, sometimes very bright and multicolored. Any shade can be used, and embellishments can cover the whole surface. Senegalese women’s robes usually have a round neckline, often it slides off one shoulder, which looks charming and sensuous. 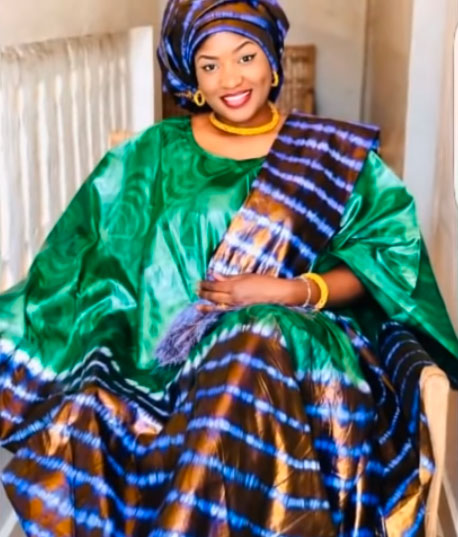 Female boubous, same as with male garments, can be of various width. Simple robes are just long loose garments, while grand boubous look regal and attract everyone’s attention. A large amount of shiny fabric is adorned with colorful prints and embroidery and an elaborate large headpiece on top of it all – you’ll never forget the view.

The fabric traditionally used to make a boubou is very specific. Senegalese people like their garments nice and shiny, so they prefer bazin and wax fabrics. What is that? Bazin is cotton batting. It is imported from Europe and Asia, it’s comfy to wear, dyes nicely, and the surface appears shiny and glossy. Especially the most expensive and high-quality bazin. The wax cloth is the cotton fabric wax dyed from both sides to add various prints to the cloth. Africans love this type of fabric because it’s so very cheerful and beautifully patterned.

Women in Senegal complement their boubou with a matching or just colorful headscarf called “moussor”. It is made from the same shiny fabric as the boubou itself. And this headdress is tied so that it formed a large sort of turban around the woman’s head. Senegalese females know many different ways of draping a moussor, and it is usually a few times bigger than the head, creating an eye-catching accent to match the magnificent grand boubou.

Senegalese traditional boubou and other items of the full attire are widely in use even today, in the 21st century. Modern Senegalese fashion designers create contemporary boubous, these garments are sold in clothing stores, and people wear their folk outfit for special occasions very often. This traditional dress is still a part of the Senegalese lifestyle.