The Byzantine Empire was a huge and powerful state in 395-1453. Its clothing traditions are rich and interesting to learn about. Let’s look today at the women’s costume, with its typical garments, peculiarities, decorative elements, and unique features. What jewelry and accessories did Byzantine women use? For example, why didn’t they typically wear necklaces? Were females officially allowed to go out bare-headed? What fabrics were most common and why? We will try to answer all these questions and more.

Byzantine traditional women’s costume consisted of an undertunic, a tunic called “dalmatic”, outerwear (for example, a cloak called “himation”), a headdress, socks and shoes, and jewelry.

Byzantine undertunics were made from linen. The cut was similar to other medieval undergarments used in Europe – small and round neckline, straight or reasonably narrow sleeves, A-line cut (with the help of side inserts). The undertunic could be plain or adorned with silk applique, embroidery, or other decorative elements – for status undergarments, of course.

Byzantine dalmatic was worn by both men and women, but the design was different a little. The main features of a male and female dalmatic were the same – it was a loose garment, with a round neckline, and the tunic was fastened on the left shoulder. The sleeves were usually wide, but it depends on the period – narrow-sleeved tunics were used as well. A dalmatic could be made from silk, linen adorned with silk decorations, wool, or other fabric.

Byzantine child’s tunic, the 6th-9th century. It is embellished with tapestry-weave ornament. From The Met Museum

A dalmatic, and a female tunic is no exception, was usually belted because the cut of this tunic was typically rather loose, so they were a lot more convenient and prettier when belted. At the same time, on Byzantine frescoes and various depictions we see that the tunic is belted but don’t see the actual belt, it is often hidden under the pleat of the fabric. So, most probably ordinary Byzantine citizens used thin strings and cords as belts.

The neckline and front part of a women’s dalmatic was richly adorned with silk woven patterns, which look rather catchy and festive. Silk weaving was extremely popular in Byzantine. Thanks to these decorative patterns, Byzantine women didn’t need any neck jewelry, like beaded necklaces or pendants. Only in rare cases, we occur a few very large beads worn with a tunic.

Generally speaking, there was a wide variety of dalmatics in Byzantine. Some were ankle-length, others knee-length; some had long narrow sleeves, others very wide sleeves, still others had short loose sleeves. The material could be different – according to the occasion, status, profession, financial capability of a person, and so on.

Byzantine women used large cloaks of a particular design. They are called “himation”. These cloaks or mantles were draped so that the right shoulder was left bare. Himations were made from wool, cotton, linen, or silk. Obviously, everyday outerwear of Byzantine ordinary people was always made from cheaper wool, while silk was more of a status fabric. And cotton and linen were imported, so they were somewhere in between – not as available as wool but cheaper than silk. 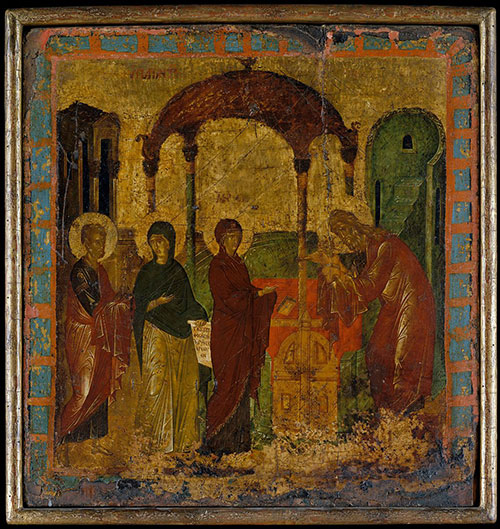 Byzantine painting “The Presentation in the Temple”. From The Met. You can see women wearing himation shawl covering their head and body

Byzantine women weren’t obliged to wear a headdress at all times, as most Slavic and Scandinavian married females. They could go out with an uncovered head, but in this case, the hair had to be made into a hairstyle, no loose hairdos were typical.

At the same time, Byzantine women used a lot of headdresses, which usually consisted of a cap and a white veil or it could be a wimple.

Also, a himation was sometimes draped around the head and shoulders, serving as a shawl.

Another very typical Byzantine headdress for both men and women was a turban. For women, it was often a white linen or cotton turban.

In Byzantine, women usually wore leather footwear – boots or shoes. The richness of decoration on such pieces depended on the status and wealth of a family. But you should remember that there was a comparatively strict hierarchy among Byzantine people (though, in some corners of the world, the rules were a lot stricter) – farmers didn’t wear status clothes and footwear reserved for the high-rank officials. Women had less strict rules regarding clothing and accessories, but still, there were some.

To confirm the previous thesis, women could wear red boots made from soft leather, while men didn’t do it – only the royals or males of very high social status.

Leather shoes were worn with high socks, often knit from cotton thread. Festive or status socks could be adorned with cute knit patterns (very often, such patterns were made with indigo-dyed blue threads). And most probably, such Coptic socks were made with knitting needles (not like a Scandinavian needle-binding technique).

In Byzantine, females wore jewels, though not as many as in some Arab, for example, countries. The most common were earrings, bracelets, and finger rings. And remember? – no beaded necklaces.

By the way, the design of Byzantine jewelry pieces was often inspired by Arab culture. For instance, jewelers used Arabic writing or even pseudo-Arabic writing to decorate jewels. The colors, patterns, symbols were also often taken from the Arab jewelry items.

Status Byzantine jewelry was made from gold or silver and embellished with enamel, pearls, gems, etc. But there were a lot of simpler pieces made from silver or bronze and with fewer decorations.

Pair of original Byzantine gold bracelets decorated with pearls and gems. Dated 500-700 A.D. From The Met

If to summarize a bit everything about the Byzantine women’s attire, we should say that this Empire was huge, and so the clothing rules were not as strictly established, same as the social statuses weren’t as clearly divided, as in some other corners of the world at the time. We find (on frescoes, paintings, drawings in books, engravings, etc) a wide variety of clothing designs, specific features, and decorative elements, which makes the Byzantine culture very rich, diverse, and interesting to learn about.