There is no official national costume in Sri Lanka. But the most popular items are sari for women and sarong for men. The traditions in men's clothing are simpler and clearer – men of any age wear sarongs or trousers. It is a little bit more complicated with women. Their national costumes depend on the age, marital status and the event. Mostly women use sari or half sari. But there are different regional peculiarities.

The clothes of women in Sri Lanka differ much depending on the age of a woman. Little girls often wear skirts and blouses. The skirts are stylized to sari a little bit. Girls who reached puberty and young women wear half sari. The bottom of this attire looks like a sari, but the top is a scarf or a piece of cloth put on a shoulder and tucked in the skirt. The top can also be a jacket or a blouse. Married women and older women always wear sari. 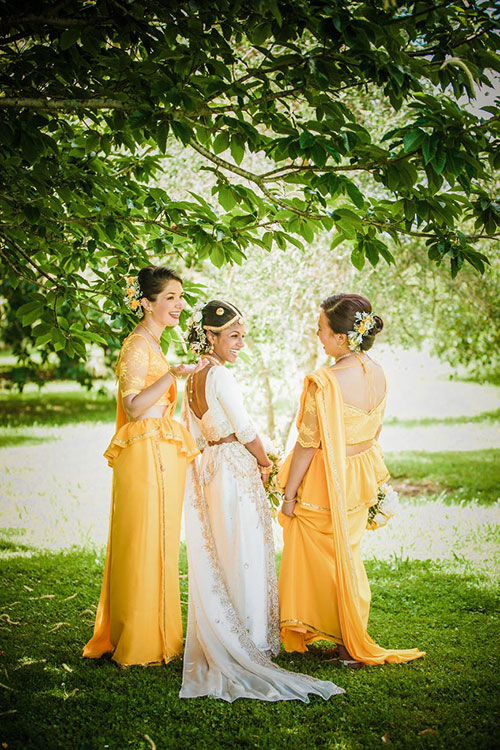 In some regions women wear tight-fitting, short-sleeved jacket with a wrap-around; or a full blouse which is partially tucked in at the front. There are also such pieces of clothes as redde and hatte. It is a modification of the Javanese Kabu kain. The redde is a 2.5 m long piece of sloth which is wrapped around the waist. The hatte is a linen blouse with a round or V-shaped neckline.

The traditional clothing for official events and ceremonies is a sari. This sari must be very colorful, bright and ornated. 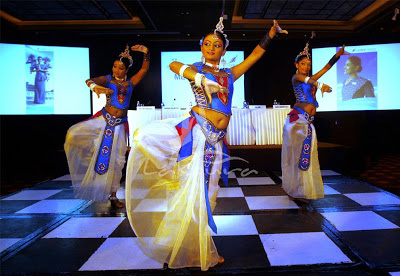 Muslim women in Sri Lanka wear same dress as in any other country. They cover all the body, except face and hands. Mostly Muslim women use sari in a drape called the Gujarati drape. It lets them cover the head with extra fabric when needed.

Many traditions in Sri Lanka are similar with those in India. And the climate is also the same. So, a lot of clothing in these two countries is alike. Women cover their body with light and feminine sari, use massive jewelry, and wear hair updos.

Men in Sri Lanka wear a sarong – a long piece of cloth that is wrapped around the body. This piece is the most popular and widespread. In some regions men use a sarong with a long-sleeved shirt. But mostly men don't wear tops at all. Hot weather helps with that.

There are several ways to wear a sarong. Sometimes men tie it and make a knot in front, in other cases they wrap it around like a skirt, and others put the end between the legs and tie it or tuck into the sarong (it turns out something like trousers).

Traditional clothing for special occasions for men is trousers and t-shirts. Sometimes they wear caps as well.

It helps me to complete my school project.......
Thanks

Same Here
Quote
#20 Sapumali 2018-03-02 14:21
More than the information, the comments are wrong. Sari is a common word for a particular piece of cloth which came from India - and both Sinhalese and Tamils and even Muslims followed it. The difference is that each community wore it differently. Muslims wore it without showing the middle body area due to culture and religion, and they continued calling it sari. Tamils also called it sari and wore it with the middle body visible and the same as in South India. Sinhalese living in some parts also wore this way But Sinhalese from Uda Rata, up country and some other parts changed the way of draping and made it their own way - and called it OSARI. Just because OSARI method is not followed in other countries does not make it the national dress of Sri Lanka unless it is notified by a gazette. Go to Dambana and ask the Veddha community the original dress of Sri Lanka, they are the real origins of Sri Lanka and they will know the answer.
Quote
#19 jason 2017-10-08 13:27
helped me with my school project thanks!!!!!!!!!!!!!!!$$##%
Quote
#18 bob 2017-09-10 09:50
What do men wear for their wedding day?
Quote
#17 Rasangika Fdo 2017-08-13 23:58
Sri Lankans do have traditional clothing. For men it is sarong and for women it's "osariya". Saree was came from India and that is not the traditional dressing of Sri Lanka. I think you guys should change those information. Thank You.
Quote
#16 Sri 2017-05-23 14:18
False information.. there is a national costume in Sri Lanka osariya for women and sarong for men.. if you don't know the true facts don't publish them..
Quote
#15 Soccer 2017-04-10 22:02
Quoting SuperPerson85:

[quote name="Shanudrie"]I'm Sri Lankan and you have stated false information. The national attire for women is the Kandyan Saree and is most often worn by the Sinhalese.