Byzantine was a very rich and very Christian empire, which influenced, of course, the clothing tradition of this country. Based on Roman clothing, Byzantine dress was somewhat different. Even more so were the royal outfits of this Empire. We’d like to show you a quite accurate replica of the attire of the Byzantine emperor – Constantine VII Porphyrogenitus. As this costume is a modern replica made for a museum, such materials as gold, real pearls, and precious stones were not used, but you can still have a nice overview of a Byzantine royal attire.

The photos are from The Museum of Making of Ukrainian Nation, Kyiv, Ukraine. It is a wax figure of emperor Constantine VII Porphyrogenitus (905-959 A.D.).

The Byzantine Empire was a large and developed state, the continuation of the Roman Empire in its eastern provinces. This empire existed from Late Antiquity to Late Middle Ages. At its zenith, the population of the Byzantine Empire was 19 million people. It is considered that Byzantine was a body of religious, political, and philosophical ideas for European, Slavic, and Ottoman nations.

In Byzantine, people liked fine fabrics, bright colors, intricate patterns and textures, and, of course, expensive trimmings. The upper-class men and women wore hand-woven silks, richly embroidered and embellished with gems. But even lower classes wanted beautifully patterned clothes, so they wore printed and resist-dyed fabrics. Elaborate trimmings on the costume’s borders were extremely popular, whether they were embroidered edges, pearl- and gem-decorated, or just simply printed borders.

But, as you can imagine, the royal outfits of Byzantine emperors and empresses can’t be even compared to the clothes of ordinary people. That’s where tailors and jewelry makers used all their imagination and the best of the existing materials.

The main garment of the emperor was called “loros” or “pallium”. It was a heavily bejeweled ceremonial version of a Roman toga. It was a long piece of fabric wound around the body. One end of it dropped down in front to below the waist, the other was draped over the left arm. Though this outfit was seldom worn in real life (only a few times a year, for great celebrations), Byzantine rulers were always depicted in paintings in this attire.

The male outer dress, sometimes called “scaramangion”, was a fitted ankle-length robe with closely fitted sleeves. This garment was worn under the loros; it had some underwear pieces beneath.

Of course, the emperor’s outfit was complemented with a crown. It was made from gold and richly bejeweled. Particularly, there were religious icons added to the decoration, huge precious-stones, and lots of pearls. At the temple, the male crown was also adorned with strings of pearls.

The royal clothing in the Byzantine Empire was literally spangled with gems, pearls, and gold embroidery. Even, the shoes and gloves had plenty of such embellishments. 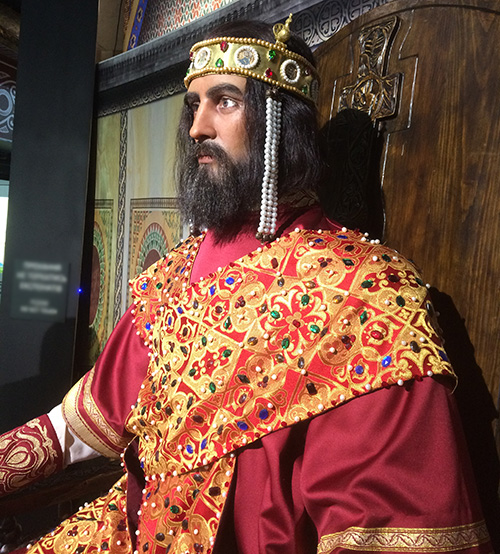 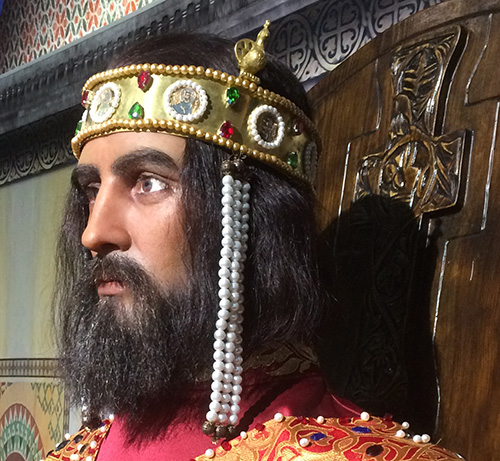 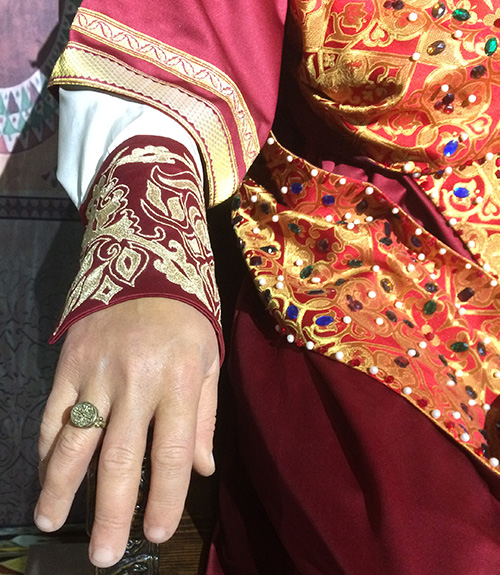 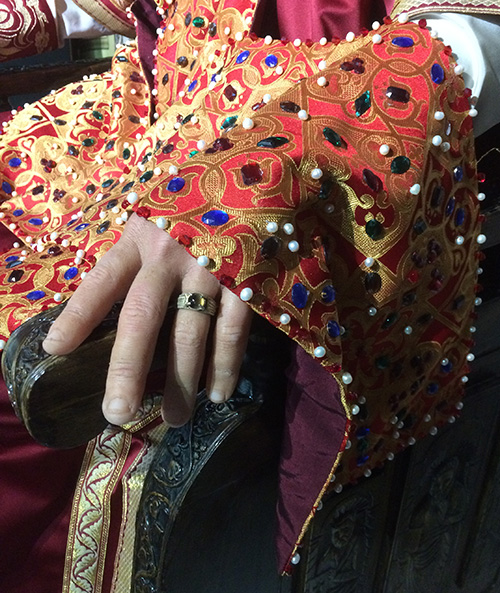 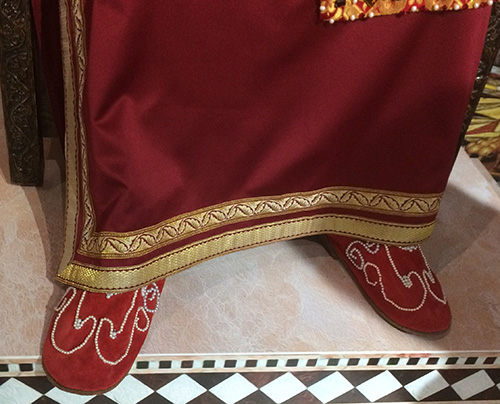