This is the second part of the material about Georgian-era jewelry. This time, we’ll talk about various styles of adornments used by the ladies in that period. You should know that they didn’t care a lot about matching different items together – it was perfectly fine to wear totally different jewels all at once. So, what necklaces, earrings, bracelets, pendants, chains, hair jewelry, and other pieces did Georgian-era ladies use? Let’s see. Some of these adornments are so charming and adorable! And remember that every single jewelry piece was handmade at the time.

Read also: Georgian-era jewelry. What materials did jewelers use at the time?

The Georgian era is a period from 1714 to about the 1830s in Europe. This period is named after the British kings George I, George II, George III and George IV. It is characterized by romanticism and mysticism in culture and all other areas, including jewelry making.

One of the most widespread and typical styles of jewels in the Georgian era was a collar necklace. Of course, at the time, it was just called a “necklace” because there weren’t many different jewelry styles then. In the 1700s, necklaces were usually short and worn high up on the neck, more like a choker than a necklace on the decolletage.

And it had ribbons at the ends to tie the necklace around the neck, rather than clasps we have today. It was also a convenient thing because you could adjust the piece as high or as low as you wanted. These ribbons were attached to special metal loops on a necklace.

Closer to the 19th century, fashionable necklaces became longer, which is more familiar to us. And also, box clasps appeared. Often, they were hidden behind one of the set stones at the back of the neck.

At the end of the 18th century (appr. 1794), another style of a necklace became trendy. It was called a “festoon” necklace. And its characteristic feature is additional loops hanging from a necklace. They could be made from chains or strings of pearls (or beads). In the 19th century, these festoon necklaces became more intricate. For example, they could be made from a set of cameos or large gems joined together by gold or silver chains that were formed into these festoons or loops. But there were simple festoons as well, which had a center stone and 4 chains branching from it.

Beads weren’t a thing in the 18th century. Jewelers just didn’t have that developed jewelry techniques and tools to make them. There were some adornments created from soft stones, but they were rarer than other jewelry styles. Still, we can sometimes see beaded necklaces and earrings on the period portraits.

Around the 1780s, the ladies start to wear necklaces made from metal beads, for instance, gold beads. Of course, they were thin-walled hollow beads because, otherwise, they would be unreasonably expensive. Also, the beads could be made from alloys to resemble gold or be coated in a thin layer of gold.

So, beads were rare. We can usually find coral, pearl, turquoise, garnet, lapis, and gold beads.

From the 1790s, chains came firmly into fashion. They looked delicate and sophisticated, which was just what the ladies wanted at the time. We can see chains not only on festoon necklaces but as separate jewelry. All of the chains were handmade, so the links were not as tiny as we have now because a real person, not a machine, worked with them. In general, the chains were heavier and a bit bigger than modern ones.

These jewelry pieces were a little similar to cameos but they were, actually, painted mini-portraits. They were worn, usually, on a ribbon or cord in the 1700s and on a chain in the 1800s. Also, they could be pinned to clothing or even worn as a bracelet. Usually, these were portraits of a close relative, like a child or husband, etc.

This item was popular but weird jewelry. Such pieces were widespread in the period from the 1790s to the 1810s. And they were romantic artifacts. Usually, it was a painted miniature that depicted your loved one’s eye. Just one eye. And so a lady could wear such a pendant or brooch in the Lover’s Eye style, without being afraid of everyone around her identifying a person depicted on the item. A lot of people consider this style of jewelry a bit creepy or at least weird, but at some point, it was extremely popular.

Georgian Lover’s Eye jewelry from a private collection. The shape of that on the left is called a “witch's heart” – this shape was used as a talisman to ward off evil spirits. In Scotland, this same shape was called the “Luckenbooth”.

These were popular in the 18th century. They were different – some were wide and frilly, others were simple and narrow black silk ribbons, they could be beaded or decorated with pearls sewn to the ribbon, etc.

Hoop earrings were used by women in the 18th-19th centuries pretty often.

If to talk about hoop&pearl earrings, this jewelry style itself wasn’t something unique for the Georgian era, but still, such earrings were very common in the period. They consisted of one or a set of several large pearls attached to a hoop.

Two other typical and lovely jewelry styles for the Georgian period are the harlequin and acrostic pieces. The harlequin jewelry are adornments made from a variety of different-colored stones – either real precious and semi-precious stones or paste stones. The gems didn’t match in any way or color palette, they were just a number of different stones. Surprisingly, it did the trick – such necklaces, bracelets, earrings, finger rings, etc looked vibrant and were rather fashionable. 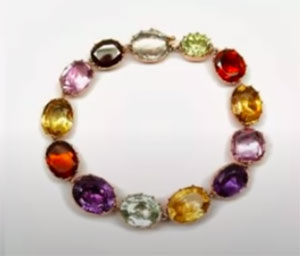 The acrostic jewels also consisted of various stones, not matched by color, but they had a secret meaning. You could send a message with a piece of acrostic jewelry. For instance, a word could be spelled by the first letters of stones put in a row in a necklace or bracelet (often, it was the name of the owner). It’s so romantic and adorable to read these adornments hundreds of years after the message was delivered to a person who got the item! And it must have been even more fun for the ladies to read these messages back then.

These are sets of matching jewelry. They were a bit simpler in the 18th century (usually, just a necklace and matching earrings) and very elaborate in the 19th century (could consist of up to 10 items that could be re-arranged and worn altogether or just separate items). Often, such sets had detachable pieces, like pendants that could be attached and detached from the necklace or earrings with removable pendants. You could have one large set of jewelry and create a variation of different sets of adornments, according to the occasion.

This is another item commonly used in the Georgian era. And it was sort of a useful jewelry piece. Quizzing glasses is a magnifying glass set into an ornate holder. It was usually attached to a chain or ribbon and worn around the neck. This item was used by both men and women.

In the 1700s, there were two typical styles of hair jewels – ornate arrangements created from metal (gold or some alloy) and gems and hairpins with decorative heads. The first are often called “tremblant jewelry” because they had a lot of tiny details that trembled and moved and reflected light beautifully. These were complicated arrangements made in the shape of flowers, feathers, leaves, wheatears, and so on. The hairpins with decorative heads were flat, simpler, and easily pinned to the head. Both these hair jewelry pieces went out of fashion around the 1770s.

These two pieces became trendy in the late 1790s. They were rather diverse. Some tiaras could be extremely costly and ornate. But also, there were much simpler but just as elegant day tiaras. Sometimes (though, it’s rare), they had fake curls already attached to a tiara so that a lady didn’t have to curl her own hair every several hours to look fancy.

Hair combs, beautifully adorned with gems and gold, were rather popular. They helped keep the locks of hair in place and added a chic look to the hairstyle. Sometimes, there were sets that consisted of a tiara and a comb, and they were worn together – tiara facing forward and comb facing backward.

In the Georgian era, there were a few or even no rules as to how to match different jewelry pieces. They didn’t always wear matching sets. It was totally fine to mix pearls with gems or paste-stone earrings with a chain necklace, etc. The ladies usually wore those items they owned and liked, no matter how they looked together, especially if to talk about color. Of course, they tried to match jewelry to their outfit, but it wasn’t necessary. So, don’t be surprised to see women in the portraits having a number of mismatched jewels on. This was because jewelry was expensive, and no one (except for the royals maybe) could afford to have a matching set for every attire or a number of jewelry sets to choose from. Even paste stones and glass beads were costly because they were handmade and usually set in gold or silver.