Georgian-era jewelry. What materials did jewelers use at the time?

The Georgian-era jewelry pieces are very elegant and tasteful items, despite often being made from artificial materials. And the jewelry makers of the period were skilled and imaginative – jewels made from foiled stones and rhinestones, iron and steel jewelry, micro-mosaic jewelry pieces, and a large variety of fake gems are the best proof to this opinion. The 18th – first third of the 19th century was a great time for jewelry lovers, but it had some difficulties and peculiarities of its own. So, let’s look at Georgian-era jewels a little closer and find out which materials are typical for this period.

The Georgian era is a period from 1714 to about the 1830s in Europe. This period is named after the British kings George I, George II, George III and George IV. It is characterized by romanticism and mysticism in culture and all other areas, including jewelry making.

What materials did the Georgian-era jewelers use? First of all, there was a material called “paste”. The paste is, basically, artificial stones, glass crystals, just like our modern crystals and rhinestones. The paste was invented in the 1730s. It was a mix of glass and lead melted into a cast to look like a gem. And this material was extremely popular among Georgian ladies. The jewelers used foil in different colors at the back of the paste stone to visually add color to the stone. So, they could be clear or could have any possible coloring. In the 19th century, such foiled stones became rarer.

Of course, real gemstones were used as well, but they were rather expensive and, thus, available to wealthier people, while middle-class ladies couldn’t afford them – in large quantities at least, and you needed to have more than just one jewelry item. The most typical gems for this period are topaz, light amethyst, garnet, citrine, peridot, and diamonds. By the way, garnets were practically always foiled because these stones are naturally dark and jewelers had to add foil to make them sparkle and shine. Even diamonds were often foiled at the time because they didn’t have as developed jewelry techniques and tools, so foiling helped to make the stones (both fake and real gems) shine brighter. 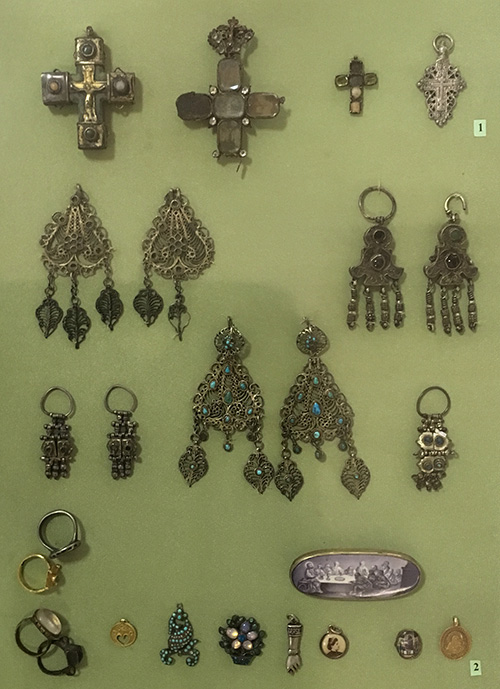 Variety of jewelry pieces from the 17th-18th century. There are crosses with semi-precious stones and fake crystals, earrings adorned with turquoise and garnet, finger rings with rhinestones, pendants with paste beads and turquoise, etc

Also, semi-precious stones were popular, like coral. Coral was a very popular choice for kid’s jewelry. It was considered to have some healing powers and to be generally good for health, so children often wore coral necklaces in the Georgian era. Since the 1790s, coral becomes the stone of choice for adult women as well. There was a large variety of shades, shapes, and sizes of coral beads, so ladies could pick whatever they liked.

Other semi-precious stones were agates, carnelian, turquoise, and lapis. And, of course, pearls! They were popular practically in any era, including the modern day. In the 18th century and throughout most of the 19th century, people didn’t make cultured pearls yet, they used only the ones naturally found. That’s why pearls were rare and expensive at the time. So, fake pearls were quickly invented to imitate the real pearls. And these fake pearls were extremely common. They were made either from glass or from the mother-of-pearl material gathered from shells. When you see huge pearls on the 18th-century portraits, they are almost certainly fake pearls. Only the royal women could afford large real pearls.

We should mention that fake jewelry in the Georgian period was something very common and usual. Such pieces were estimated rather highly and weren’t considered a cheap substitute. Even wealthy people wore fake jewels and it was okay. These jewels were expensive – though, not as much as the real thing – and required a lot of hard work to create them. People at the time just didn’t have enough natural material and jewelry techniques to provide for everyone. 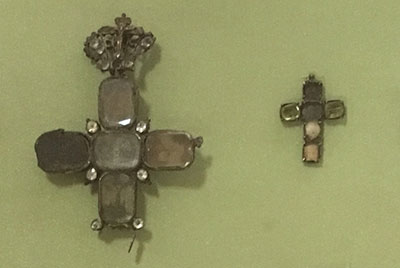 In the 1790s, cameos came into Georgian jewelry trends. It happened when Ancient Grecian and Roman styles came back into European fashion. And jewelers start producing jewels with faces engraved into stone.

Very interesting and unusual material for jewelry making is the Berlin iron. These items are really made from iron. The technique was invented in Germany and became widespread and beloved by the Europeans during the Napoleonic Wars. Such jewels weren’t as popular in Britain and America, but on the European continent, there were plenty of these items. Unfortunately, the majority didn’t survive till this day because, despite the surface of the iron bring covered with a special coating to prevent rusting, iron is still far not the most long-lasting material.

But iron wasn’t the only strange material used in Georgian-era jewelry making. Also, they used steel. The jewelry items were made from pieces of steel cut in a certain way. Such jewels, surprisingly, look beautiful and sparkly.

One of the most labor-intensive and cute jewelry pieces of the period are micro-mosaic jewels. They have some kind of a depiction on the surface, usually in Grecian or Roman style. And this depiction is made from tiny stone tiles in a mosaic technique. Such items were mostly purchased as souvenir jewelry. Even now, Italian jewelers continue to make and sell such items. 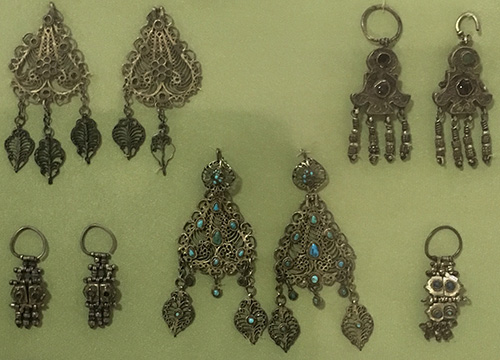 If to talk about cheaper and more available jewelry, we can mention the Vauxhall glass. The pieces were made from glass, their back was flat, and the front side was, again, extremely sparkly. Often, these glass beads were foiled to add extra shine. The Vauxhall glass jewels were tin and very fragile, so they were cheap and not too durable. Also, that’s why most of them didn’t survive till today.

In the Georgian era, all the fine jewelry pieces were made using silver and gold – for chains, casting, fasteners, etc. Sometimes, jewelers used brass but only in cheap jewels. The item could be also made from cheaper material and coated with gold or silver (not really plaited because the layer was rather thick) – it was called “rolled gold”.

For such pieces like, for example, chain watches, sword hilts, etc, gold couldn’t be used (at least if it wasn’t worn by the royals), so they preferred silver or a new alloy called “pinchbeck”, which consisted from zinc and copper. Pinchbeck looked similar to gold but was much more durable and cheap.

And that’s pretty much it. These were the main materials used in the Georgian period in Europe and America to make jewelry for the ladies and gentlemen. 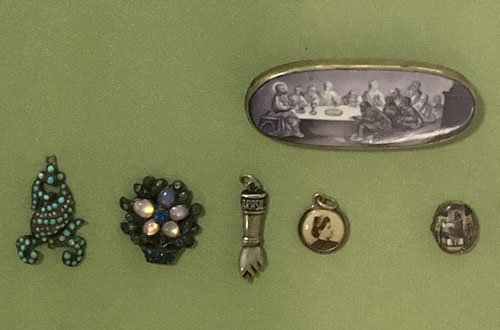