At the beginning of the 1800s in Europe, the Regency and Empire fashion styles thrived. We’ve already written a lot about stylish outfits of these periods, but this topic demands more attention. So, we dedicated this article to graceful men’s costumes of the Regency era. Delicate male gloves, which were an absolutely obligatory item for a ball, extravagant neckpieces, and breeches replaced by full-length trousers – these are only a few spoilers for you.

The Empire and Regency eras in fashion lasted in Europe from the 1800s to about 1820s. Generally speaking, these are separate styles, but they are very similar and work with almost identical silhouettes and clothing traditions, so we’ll talk about them all-in-one.

And now, let’s look at the typical garments and accessories of the Regency period in detail.

This accessory was exceedingly important for a Regency-style gentleman. While he could go out without them, he never touched a lady during a dance without gloves. So, thin leather gloves were a must-have for a ball. They were also used in daily life during the warm season. 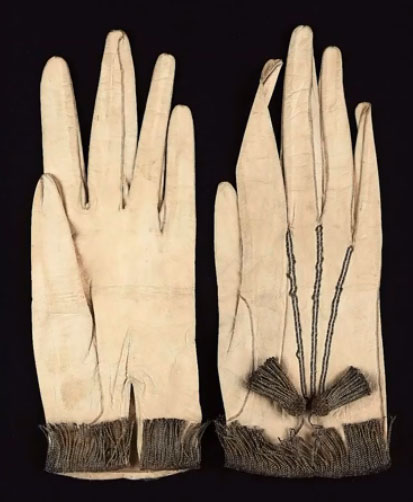 There were also warm winter gloves made from fur.

This outerwear is another typical feature of male attire in the Regency period. Men wore tailcoats of black, bottle green, blue, and brown color. There were also red tailcoats, though these garments were used only for one certain occasion – hunting.

Regency-style tailcoats usually had a very specific shape of lapels. A very unique and recognizable one. Here it is. 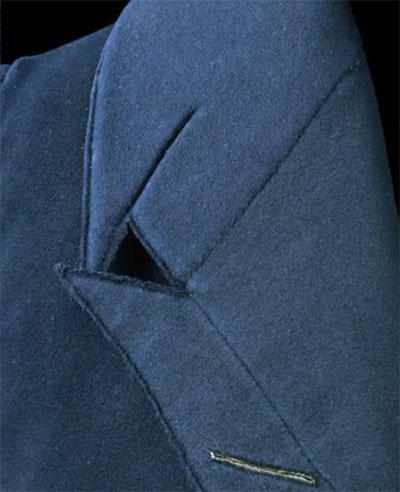 A tailcoat is a lovely garment, extravagant and eye-catching. Gentlemen loved it. But here’s a problem with this type of a jacket or coat. If the front part is so high and fitting, where to put pockets?! The secret of a Regency tailcoat is that the pockets were situated on the back flap. It’s not as convenient as the usual place for pockets, but this is better than nothing. Besides, small items could be stored in waistcoat pockets.

The Regency-style waistcoat was always lighter than the tailcoat, unlike the later 3-piece suits. And a waistcoat could be embellished with embroidery, though not as richly as in the fashion of previous periods. The back part of this garment was plain, made from cheaper fabric. And that’s understandable – men wore a tailcoat over the waistcoat, so the back wasn’t visible. 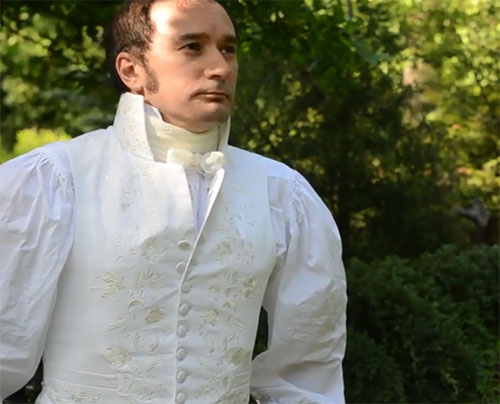 The fashionable collar of a Regency waistcoat needed to be high, it practically touched the earlobes.

Under the waistcoat, there was the item of a male wardrobe used by a lot of men but seen by only their closest family members. This intimate accessory is the suspenders. They became fashionable in 1787 and constantly evolved throughout the 19th century – the fasteners, shape, materials, design changed. 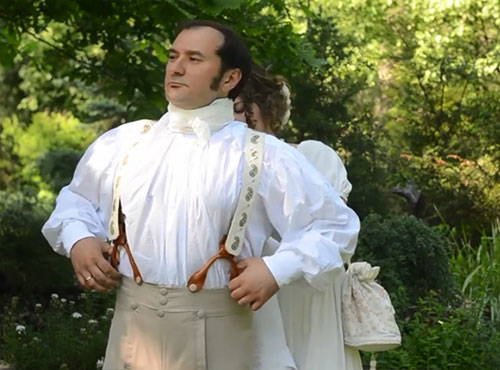 When a bride wanted to make a special, intimate gift for her groom (or wife for husband), she embroidered a pair of suspenders and presented them. This item was worn hidden under several layers of clothing, so no strangers ever saw it. In their significance, suspenders were as special as female garters. By the way, the embroidery patterns on suspenders were very similar to those on garters.

A Regency-style neckpiece was another popular accessory. Evening neckerchiefs were made from very lightweight white cloth. It was a square piece of fabric, up to 150 cm (60 inches) wide, folded several times and wound around the neck. A person needed a lot of experience and skill to tie the neckerchief so that it looked sophisticated and elegant. There even appeared neckties with a ready-made bow – men just put them on, without spending plenty of time on wrapping the scarf and tying the bow.

Even in the early 19th century, women still often sewed shirts for their husbands, sons, brothers, and other male family members. Wealthier people could afford to buy shirts, but middle-class and low-class men usually wore handmade shirts produced at home.

A shirt in the Regency era was an intimate clothing article, same as suspenders. It was seen by some closest family members and never displayed to others.

The shirt typically was mid-thigh-length. A man could go without underwear (knickers or underpants), so the flaps of a shirt could be used instead – they just tucked them between the legs inside of the trousers.

The beginning of the 1800s is a transitional period between the breeches and trousers. Men still wore knee-length breeches (which were so familiar to them, as they were used throughout the 1700s), but also, they started to use full-length trousers (a comparatively new invention for them). Breeches were the pants of a choice when a man was dressing up for a ball.

At first, the trousers could be mid-calf-length. They gradually lengthened to the ankle-length. Often, there were a few buttons at the bottom of each pant leg, which, by the way, were rather tight-fitting. 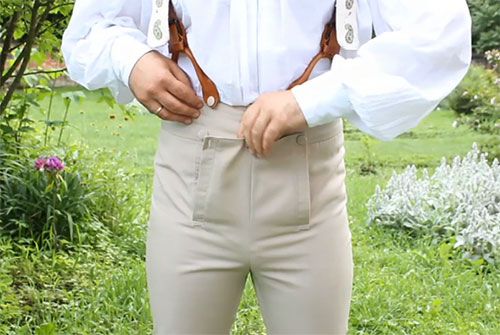 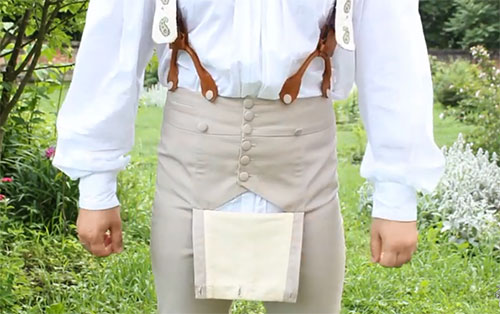 Another structural peculiarity was the front flap. It covered the buttons at the front of the trousers. With this piece, the pants looked smoother and more fitting.

Stockings were an obligatory part of a male wardrobe. Of course, no man dared to go out with bare legs – it was unheard of. Festive stockings worn for a ball were always white silk stockings. Everyday stockings often were darker.

Shoe fashion changed all the time throughout the years. At the turn of the century and the early 1800s, men’s shoes had heels and buckles. Sometimes, they were rather ornate and decorative. By the mid-1800s, they became flat-soled and gained a simpler look.

The last part of the male wardrobe was the underpants. They weren’t obligatory, sometimes men went without them. But still, often, this item was used. These were linen or cambric breeches, above-the-knee-length, and sometimes extremely thin to fit under tight pants. 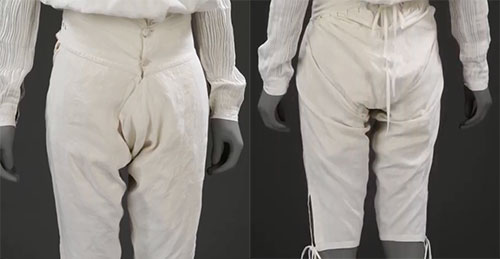