The Empire fashion style is a great example of radical changes in fashion. It’s hard to find a historical period with a more abrupt change in clothing styles than the end of the 18th century. Female attire – from corsets and wide panniers to natural nightgown-style dresses. Male attire – from ornate livery and breeches to frock coats and white tight-fitting pants with minimal embellishments. And all that to look like an ancient marble statue as much as possible. But who were those people who dared to be the first to wear Empire-style garments in a conservative 18th-century society?

In reality, this abrupt change in fashion wasn’t so abrupt after all. It was preceded by a few decades of preparation, when the society gradually changed their tastes and ideals, and not only in clothing but in lifestyle. People started to turn to nature. The changes were in the air – you could see it in architecture, art, and, of course, clothes.

The Empire silhouette was greatly inspired by the Roman and Greek tunics and even more so by the ancient statues. 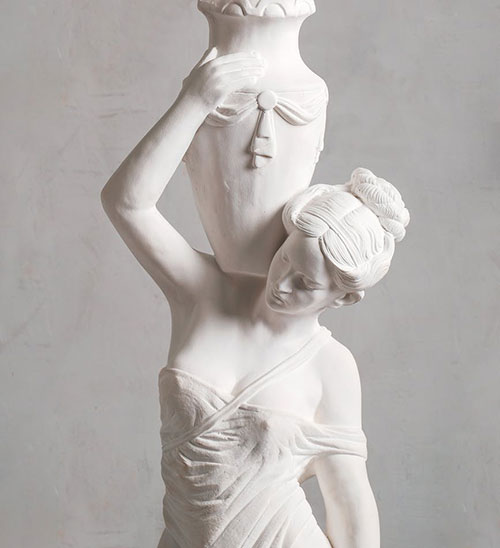 We can say that a few prominent personalities played a big role in the formation of Empire fashion. Let’s take a closer look at their input.

The first of them was Emma Hart (Lady Hamilton). At the end of the 1780s, she came to Naples and, soon, married Sir William Hamilton, who was the British Envoy to Naples. Emma Hart is known for performing so-called “Attitudes”, living pictures of classic sculptures and paintings. These pantomimes highly impressed the spectators, among which were noble ladies, who made the Grad Tours through Italy. These ladies were the ones who brought the new aesthetic idea of a natural fashionable silhouette to Britain, France, and other European countries. Of course, far not everybody liked this new fashion tendency and Emma’s performances. Some people considered them improper and even scandalous. But still, the influence of Lady Hamilton’s Attitudes on the establishment of the Empire fashion style is undeniable. 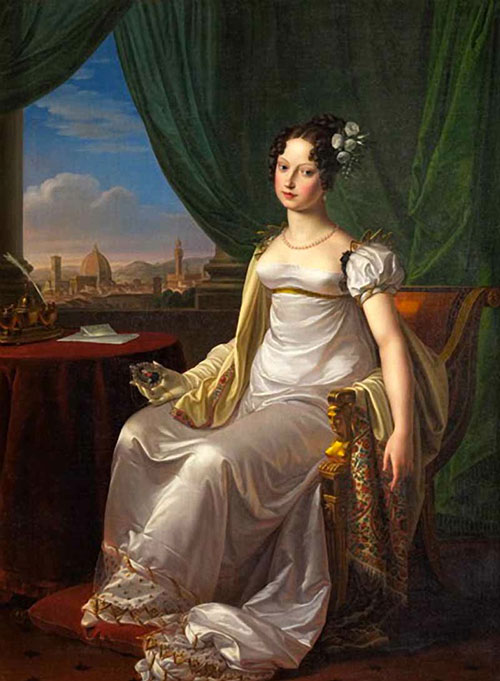 Another personality was Lady Charlotte Campbell. She observed Emma Hamilton’s performances and was a trendsetter herself. For instance, in 1793, it was her idea for ladies to put a small belly pad under the dress. Such a specific silhouette reminded of the Ancient Greek and Roman clothing. But even more alluring and provocative for the ladies was the thought that this silhouette created the impression of pregnancy.

But two French noble ladies – Joséphine de Beauharnais and Thérésa Tallien – went even farther. They started to wet their dresses (which already were semi-transparent) with oil and water to make themselves look just like ancient statues.

Though, not only women played their part in the creation of Empire fashion. Several men also did a lot to make a natural silhouette popular. The first one was Thomas Hope. Being a collector himself, he traveled throughout Europe and gathered plenty of antique art objects. He took inspiration from these classic samples and even designed his wife’s gowns in the same fashion. Also, Thomas Hope wrote books illustrated with pictures of Ancient Greek and Roman garments or their modern stylized versions. And noble ladies often used these images to make fashionable dresses for themselves.

Thomas Hope had a friend – George Brummell, the creator of dandyism style in clothes. And this man also admired classic ancient clothing and incorporated its ideas into fashionable styles of the late 18th century. 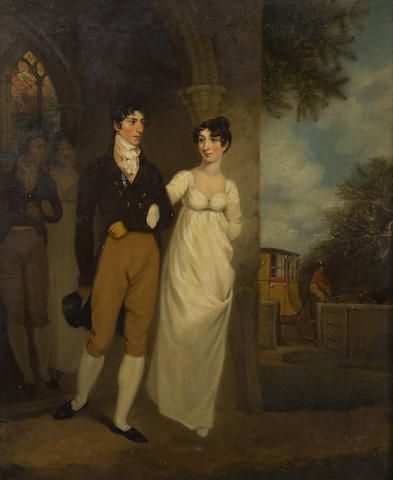 Painting by Joseph Clover. Portrait of the artist's brother and sister-in-law in the porch of Thwaite Church on their wedding day

This period is the time when men started to wear white tight-fitting pants and frock coats with a very short front. Why do you think men wore such garments? Of course, to resemble ancient marble statues. Obviously, such tight trousers were extremely revealing, which was unheard of in the 18th century.

The Empire fashion is unique and curious. It seemed scandalous at first in the late 1700s. But like any fashion trend, it quickly became popular and the norm for picky European aristocracy. Both men and women fell in love with this style, and some of the garments were widely used long after the Empire era ended. For example, tight-fitting white pants were used by men for centuries. And the natural Empire silhouette of a dress can be often seen on women even today.