In this article, we’ll talk about the fashion trends in women’s clothing of the 1890s. What did ladies wear? What silhouette was the most fashionable and popular? Also, we’ll give you a great idea as to where you can see the examples of this period’s clothing, and more precisely, in what movie they occur. Historically, the 1890s didn’t actually bring anything really fresh and new into fashion but this era’s silhouette, in general, is unique and recognizable. And let’s see why.

The 1890s are a period in women’s fashion when sleeves became extremely puffed and large. The upper part of a sleeve (from shoulder to elbow) was puffed and the part from elbow to wrist was tight-fitting. This design created a specific, easily recognizable silhouette typical for the era. And the sleeves were called “leg’o’mutton sleeves” because the shape reminded of a lamb’s leg. 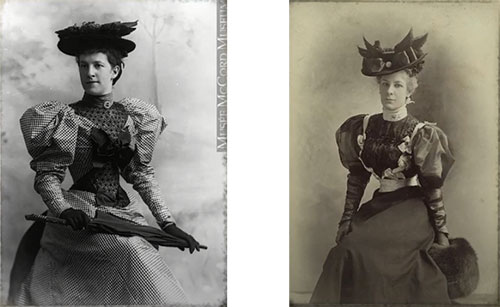 Such a trend appeared in the early 1890s. During a few following years, the sleeves grew and got puffier and puffier until 1895. After that, this tendency got old-fashioned and the shape of sleeves gradually returned to normal, or rather to usual.

Here are some examples of this period’s female costumes used in a movie: Crimson Peak stage costumes. Delicate and ornate gowns of Edith Cushing.

In the late 1890s, the sleeves got smaller and only a bit of a puff was left at the shoulder. 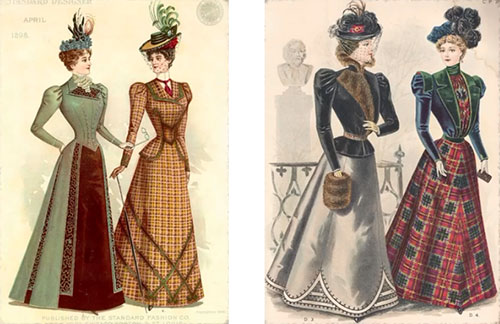 The silhouette of women’s outfits in the 1890s is rather flattering – the hourglass shape is achieved by puffed sleeves, a narrow waistline, and a wide bell-shaped skirt. There is definitely a certain charm about such a design.

There was another interesting trend in the 1890s – ladies wore a short bolero jacket. The idea of such a garment appeared in 1859 when women got inspiration from zouave jackets (uniforms of the French Army) and Spanish bolero jackets (folk dress of Bolero dancers). 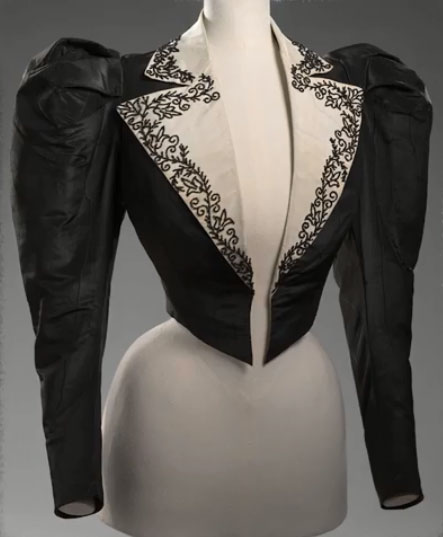 These short open jackets returned into fashion in the 1890s. But this time, they often had fashionable leg’o’mutton sleeves. By the way, the bolero jacket’s shape also adds to the fashionable hourglass silhouette of the time.

The 1890s is a time when women began involving in physical activities and sports outside their homes (cycling, riding, team games, etc), so they needed more comfortable but still elegant clothing. Because of this, crinolines and bustles were thrown away and corsets began to change. Women started using the outfits of more natural feminine shape – and what can be more feminine than the hourglass silhouette?!