Nowadays Chilean people use their national attire rather seldom. They wear it mainly for festivals, ethnic holidays and other special occasions. They prefer to wear Western-style clothing in day-to-day life, not national costumes traditionally made from llama and alpaca wool. 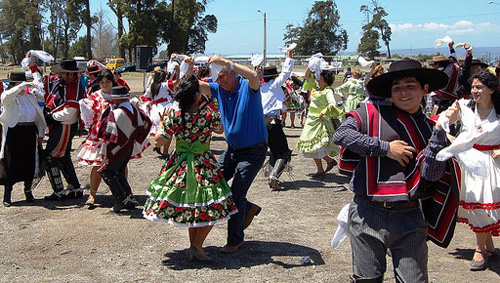 Chilean people dancing in traditional attires. Men are in chamanto and chupalla, women are in flowered dresses, pollera skirts, and blouses with ruffles. Photo from Thisischile.cl

In other regions of Chile men's traditional costume looks very similar, but women's clothing is different. Women use pollera skirts and blouses with ruffles, waistbands and flat-topped hats.

One of the main items of Chilean national costume is called "chamanto". It is a kind of poncho, but there is a difference. Both sides of chamanto (inside and outside – light and dark) can be used. Usually, people use the dark side during the day and the light side at night. This piece of clothing, as well as a poncho, is very convenient, warm and beautiful. Often it has bright embroidery and a fringe.

Chileans also wear long and wide cowboy trousers. They can be made from leather or cotton. Cowboy trousers are often embellished with fringe and other decorative elements.

Safari jackets are less widespread than chamantos but still popular. It is a more modern piece. It is a light weight cotton, drill or poplin jacket, dyed in khaki color. It has a lot of pockets. Safari jackets are very convenient, that's why they became so popular. 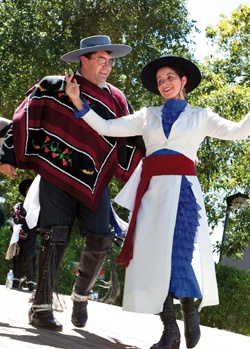 Also, Chilean men wear long togas and robes made from natural fabrics. They are the outerwear.

Chupalla is another popular item. It is a straw hat used by Chilean men. Sometimes it is made from rice and wheat. This hat is widespread in Chile, males of all social classes and regions wear it.

A hat for cold weather is called "Chilote cap". It is made of coarse raw wool and usually has a pom-pon. The color of Chilote cap can be various, but usually, there are several horizontal stripes dyed in anoother color.

Traditional women's pieces of clothing are pollera skirt and blouse with ruffles. The skirt can be rather short and puffy or very long and wide. Women wear many underskirts to make pollera skirt puffy and festive. They use belts at the waist to emphasize the tenderness of female figure.

Sometimes women wear chamanto, same as men. This poncho-like garment is warm and attractive. It can be made from wool, cotton, and even silk. It is often hand-woven using a difficult type of weaving. So, nice chamanto is rather hard to make. The beauty of chamanto is also in its pattern, it is decorated with images of animals, flowers, crops etc. The pictures often honor the traditions and the past of Chilean nation. 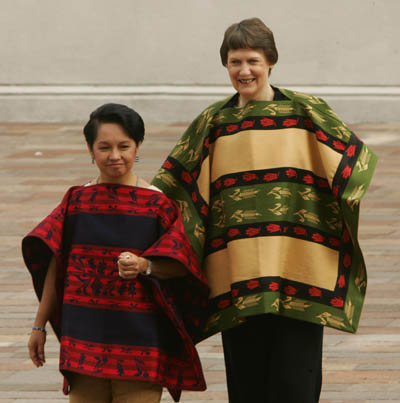 Flowered dresses are very popular among Chilean women. They are used by dancers and ethnic musicians. It is a beautiful dress with flower pattern which has a wide bottom (it can be ankle-long or knee-long) and a ribbon waistband. Women wear few underskirts to make the dress puffy. The flowered dress is worn with a white apron or a white kerchief (which is used during the Chilean national dance called "cuaca").

Women use boots or light shoes, depending on weather and activity.

The last picture was the former Philippine president.

The last picture was the former Philippine president.