Men in Chile traditionally use a charming wide-brimmed straw hat called “chupalla”. It is a lot smaller, lighter, and comfier than, for example, a sombrero, a hat worn in several South American countries. The chupalla looks good, is very functional, and adds a specific Chilean charm to the local males. Today, it is usually seen on folk performers during different folk festivals and national celebrations, but some cowboys and men from rural areas still wear a chupalla in day-to-day life.

A chupalla is a folk hat popular in Chile. It is made from straw – wheat or rice straw these days. Though originally, it was made from bromelia plant called “achupalla” in Chile, hence the name of this headdress.

This hat has a particular shape – it is comparatively wide-brimmed so that it hid the face from the hot sun, but not as wide-brimmed and heavy as a sombrero. The crown of a chupalla is of the middle height and cylindrical shape. From the top, this hat looks like a flat round plate with an even circle in the center. Most chupallas have a special cord put under the chin to keep the hat on the head even in windy weather (because such a wide-brimmed headdress would fly away in sec).

Historically, according to The National Archives of Chile, a chupalla first appeared in Chile around the 1740s. It was named a “chupalla” in the 1820s. At first, these hats were very simple, made and used by horsemen and peasants. Cowboys liked it because it protected their heads from the sun perfectly and was light and easily produced. Later, somewhere in the early 19th century, some people started to make more elaborate and festive chupalla hats, with such adornments as ribbons or cords around the base of a crown, tassels, and other simple but elegant decorative elements. And so, fine chupallas existed along with the simple working variants. 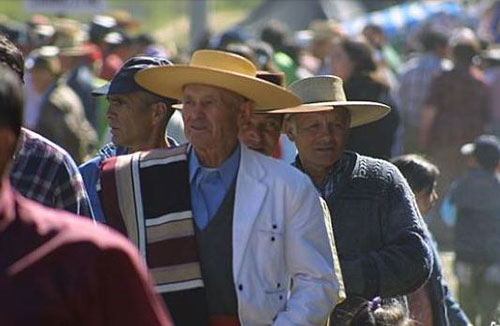 In modern times, chupalla men’s headdresses are still sometimes worn in Chile, although they’re not as popular and numerous as they used to be. In rural areas, men wear these hats in daily life because they protect the head like no other modern headdress. Also, chupalla hats are popular among cueca folk dancers (traditional Chilean dance).