In Chile, both men and women wear a charming and very South American garment called “chamanto”. This outerwear has a significant role in Chilean traditional culture. We’re not talking only about the cut and design of this poncho-like garment but also about the ornamentation on it. The patterns woven into the fabric depict the unique local flora and fauna. Despite chamanto being a not very feminine and sophisticated garment, it performs the main function of Chilean clothing pieces perfectly – keeps the body warm in the cool and windy mountainous climate of this country.

Basically, a chamanto is a rectangular piece of hand-woven cloth with an opening for the head. Its shape and cut are very similar to a simple poncho, but there is one unique feature of this Chilean article of clothes that differs it from any other poncho – we’ll reveal it later.

A chamanto is the perfect outerwear for the Chilean climate – it’s comfy because it doesn’t restrict movements, it’s warm because it is made from wool, and it’s durable, which also is important.

A chamanto is hand-woven from a combination of wool and silk, so it’s not only functional but good-looking as well. The edge is often adorned with a decorative border or fringe or ribbon. And the main body of this garment sports cute woven designs – flowers, animals, birds, greenery, vines, while geometric shapes are rarer. Among the most popular symbols, we can see corn, grapes, copihue flowers, wheat ears, blackberries, etc. 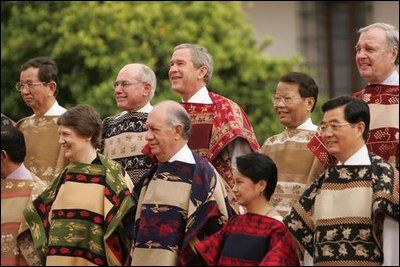 Everyday chamantos are simpler, with fewer colors and embellishments. Festive garments look bright and rather cheerful. They can be made from a combination of red, white, black, brown, green, or other colors. Though, if you’ve just imagined a tacky multicolored cloth, that’s wrong – mostly, 3-4 colors are used together, and the color palette is rather natural.

But the main and most interesting feature of a chamanto is its reversibility. Usual ponchos are worn one way, while a chamanto can be turned inside out. The simple cut allows for it without any problems. Both its sides are finished, so a chamanto can be used with any side out. Usually, one side is light-colored and the other is dark-colored, so people wear the dark side during the day and the light side at night.

Weaving a chamanto is a labor-intensive and time-consuming process, especially when a craftswoman wants to create an artful and attractive garment. But fortunately, Chileans still wear this specific poncho-style garment even today. They also consider it their cultural heritage, not just a folk clothing piece.