This period was not so long ago, only 100 years separate us, but regarding fashion, we’re worlds apart. Edwardian fashion made a turn toward our modern clothing styles, becoming more practical and sensible, but still, there were so many trends very different and even unimaginable for us. How could they wear those garments?!, some people would say. Especially when we’re talking about the ladies. But they did. Women fainted in corsets, lost balance because of their 20-pound hats, ate tapeworms to achieve a smaller waist. Though, how is it different from modern anorexic-bulimic girls or those women overindulging in plastic surgery?

The Edwardian era (1901-1914) was named after King Edward VII of Britain, but as British colonies were all over the world at the time, the term was well-known in different parts of our planet. Also, the term “turn of the century” occurs as well.

This hourglass silhouette or wasp waist silhouette was extremely popular at the very beginning of the 20th century, and a lot of women did their best to achieve it. How did they do it? By wearing some of the tightest corsets in human history. Here are a few examples of such corsets. 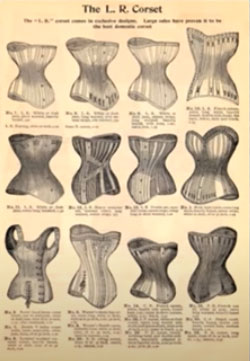 When corsets are supporting rather than squeezing your intestines unmercilessly, they can be useful and good for your health and posture. But Edwardian-era corsets were way too tight to be healthy.

Although, there were even more horrible ways of losing weight and making your waist teeny-tiny. For instance, tapeworms. Women ate their eggs to put them inside their bodies. We won’t tell you all of the awful details of living with a tapeworm and getting rid of it, you can find that online. This simply was one of the ways to achieve the ideal figure in the Edwardian period.

Another way of having an hourglass silhouette, especially if you were not skinny, was to use padding for your bosom and hips. If you couldn’t make your waist smaller, you could enhance other parts. There wasn’t a particular fashionable waist size, rather you just needed to have an hourglass figure. We personally like this method better)).

The corsetry called “the safety corset” used by women at the turn of the century made their figure look like a letter “S” from the side. Such a silhouette is also called “the pigeon breast” because the front of a female body resembles the large and rounded breast of a pigeon. These corsets were a bit less damaging to the internal organs and easier to live in. But, of course, they still weren’t totally healthy.

The ideal face at the turn of the 20th century has a name – “the Gibson Girl”. It wasn’t a real woman but a drawing of Charles Dana Gibson, an American fashion illustrator. He created the face that became a trend, a beauty ideal of the Edwardian era. By the way, this was the very first time when an American beauty ideal became worldwide fashionable, not vice versa. 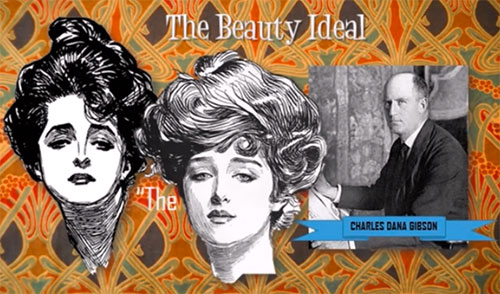 So, what’s special about the Gibson Girl? She has a long neck (trendy at the time), heavy-lidded eyes, rather small features, and a specific hairstyle called a “cottage loaf” (her hair is piled on her head in a circular shape, with a lot of volume). Such a hairdo was so very popular and millions of fashionistas in the Western world wanted it. Sometimes, women used a very simple variant of a cottage loaf hairdo, but also, they could adorn this updo with feathers, flowers, hair jewelry, etc.

If to talk about makeup, in the Edwardian period, ordinary women used just a touch of makeup. Only prostitutes and actresses wore a lot of makeup. So, a bit of powder and a bit of blush to make the look healthy. Some women used a little lipstick but of a natural shade.

To be fashionable, women had to be feminine and delicate-looking.

At the turn of the 20th century, women’s clothing was very decorated – plenty of artificial flowers, lace, various trims, feathers, and so many more.

Except for trimmings, women used specific accessories, like parasols, large hats (one particular style was called a “cartwheel hat” because of its size and shape), gloves, etc. How do you think why they walked with parasols in any weather? Not to protect them from the rain or sun. Parasols helped women balance. Because they wore very large and heavy headdresses, tight corsets of a not-so-comfy shape – they needed something to help them stand upright and support their body. 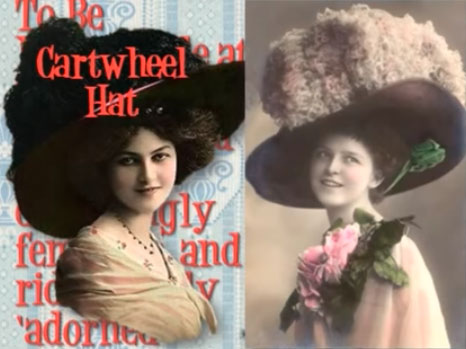 Of course, when we’re talking about all these huge hats, parasols, lacy dresses, you should understand that they were worn by middle-class and high-class ladies. Peasants wouldn’t have used such fancy clothes. But some fashion trends were available even for poor and working women, like a cottage loaf hairstyle. 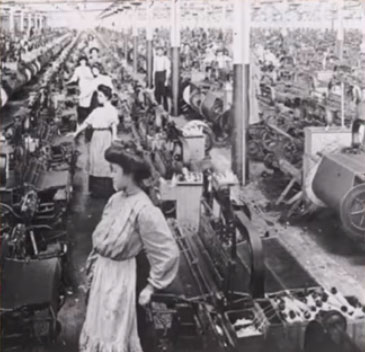 One of the most fashionable and popular garments of the Edwardian era was a shirtwaist. Practically every woman owned a few of those, no matter where she was from, what position in society she had, and what job she was working at.

A shirtwaist was a light-colored blouse paired with a heavy dark skirt. The main idea of such an ensemble was that you could wash the blouse after wearing it only a couple of times, while the skirt could be washed a lot less often. When women wore dresses, they had to launder the whole thing, and with a shirtwaist, it was easier and more practical. 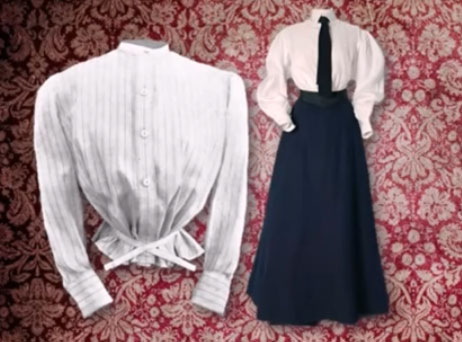 That’s why many working women used shirtwaists. High-class ladies often used this item of clothing at home, when doing various chores. There were dozens of different designs of shirtwaists so that a woman could choose whatever she liked or what she needed for a certain occasion. Some shirtwaists were simple and plain, others were adorned with ruffles, lace, decorative buttons, and so on so forth.

A shirtwaist ensemble could consist of only a blouse, a skirt, and a belt. Or a matching (to the skirt) jacket could be used as well. 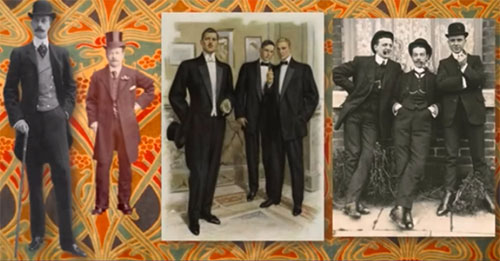 The removable collars were invented so that a gentleman could be clean and tidy every day without having to wash his shirt every single evening. He just switched his collar for a clean one, wearing the same shirt for a few days in a row.

The turn of the 20th century was the era of industrialization. People started to wear industrially-made clothes en masse. And also, their garments had to be more practical to let them do their job or various chores. A lot of women got jobs in the early 1900s, so they needed to wear something sensible and practical. Even the high-class ladies, who continued to dress in awfully uncomfortable outfits (like corsets or huge hats), chose to wear more practical garments at home.