Noble and rich women of Kyivan Rus’ dressed rather attractively. Though, of course, their attire differed a little from our modern concept of good-looking and expensive. In medieval Ukraine (most of the territory of Kyivan Rus’ today belongs to Ukraine and the capital is the same – Kyiv), people wore warm and multilayered clothes of simple and modest cut. But how could you distinguish if a female belonged to a higher class or was just a poor working woman? Which pieces of clothes or accessories indicated wealth and status?

To tell the difference between a wealthy and poor woman one could by the quality and color of the fabric, amount of jewelry, amount of trimming, and that’s pretty much it. There were no trendy labels or “designer” clothing. Every piece was handmade (either by the owner or by an artisan) and unique, individually-made. 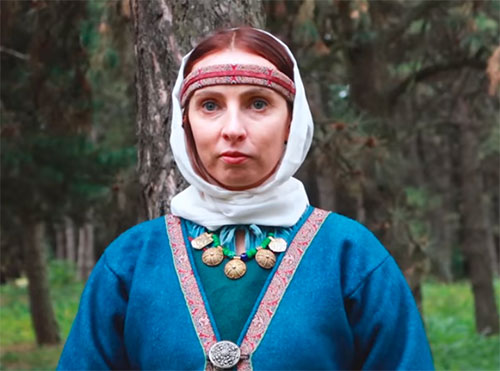 A lot of garments were made from wool (because the climate was a lot colder then), and woolen cloth can be of very different quality. Cheap wool is coarse, thick, and scratchy, while fine wool is much more delicate, thin, and soft. But, of course, wool will never be as soft as silk or velvet. 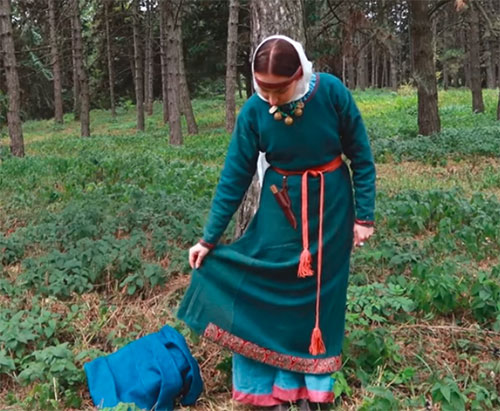 Also, cheap woolen clothes had natural gray-ish or brown-ish shade because they were undyed. Rich people wore garments dyed in bright colors. One of the most expensive dyes was blue, as the blue indigo dye was imported and rare. So, blue clothing showed off wealth. 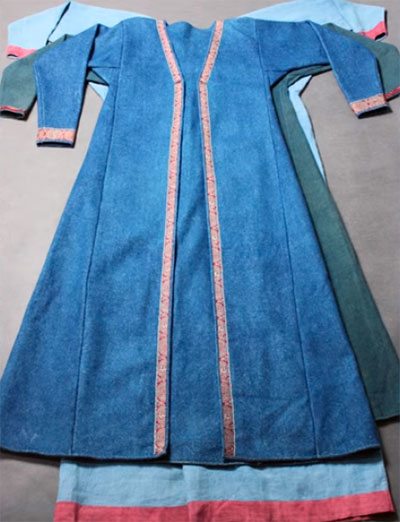 There’s one more interesting and unusual garment used by the noble ladies in the late 10th century – colorful underwear. They wore linen chemises dyed, for instance, blue. And this trend is special because, in later eras, people dressed only in undyed white or cream chemises. Why did women in Kyivan Rus’ wear colorful shifts? No one knows for sure. Maybe fashion dictated this or they wanted to feel even wealthier (because underpinnings were hidden under the main garment and strangers didn’t see them, only a spouse, a maid, or closest family members). 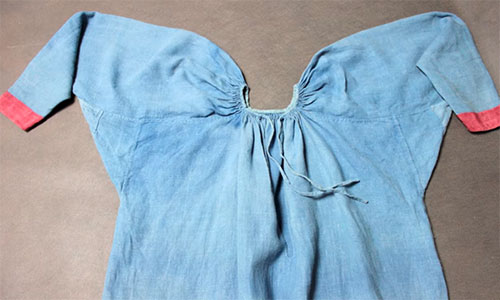 The status of a person was easily understood by the trim on clothing. Such trims as embroidery or woven pattern could be created pretty easily, so even poor people decorated their festive or sometimes everyday garments as well using these methods. But trimming made of a thin strip of silk at the edge was expensive and rare – if you saw it on somebody’s outer garment, you could be sure that he or she was rich and had a very high status in society.

Other status items in Kyivan Rus’ were, obviously, jewelry. Wealthy women usually used silver or gold-plated jewels. The royals adorned themselves with intricate silver and gold jewelry, skillfully made and costly. A woman typically wore several pieces – sort of like a set but they didn’t always match (it was common to combine mismatched items, they didn’t pay so much attention to that). 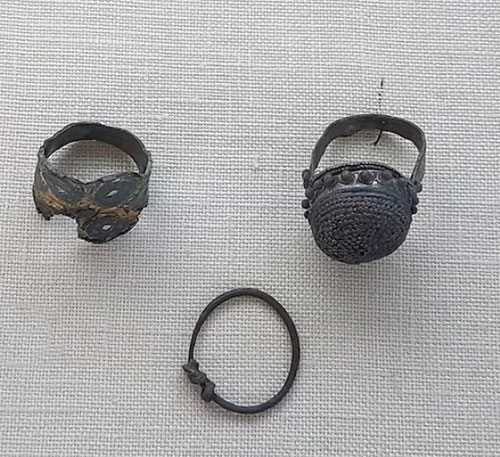 The outer garment often was fastened with a fibula. Here’s a beautiful silver round brooch. By the way, it’s an accurate modern replica of an authentic brooch from a museum. Also, there were sulgama fibulae and various other designs. 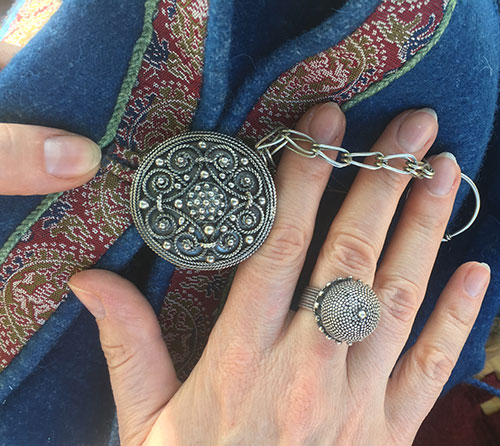 Modern replicas of silver round brooch and finger ring, typical for Kyivan Rus’

This fibula has a chain, and it is a functional item. Women hang small objects on such chains, for example, a finger ring when she took it off.

But fibulae weren’t the only jewelry piece of wealthy women. Necklaces were highly popular and there was a huge variety of them. The most common consisted of glass beads and metal (silver, gold, bronze, etc) pendants. Glass beads weren’t manufactured in Kyiv until the end of the 11th century, so in the 10th century, they were imported and costly, which meant they were even more desirable to ladies. Note that pendants in a necklace didn’t always match, and it was totally fine at the time. You could pay for something with your jewels instead of coins because silver was valued highly, so it was ok to wear mismatching jewelry and use them like money. 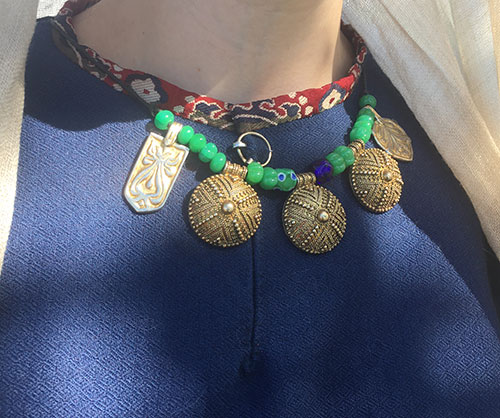 Of course, in all times, women loved rings. And in 10th-century Kyivan Rus’, they wore bronze and silver rings (the royals and wealthiest people had gold rings as well) of various designs.

Earrings were popular as well, as were temple rings. Interestingly, women could use only one earring or two mismatched pieces. Though, a pair of identical earrings were more usual.

Here is a very curious jewelry item. It is a bead on a ring. In the photo, it is attached to an earring, but no one knows how it was worn in real life – this is another modern replica of an old piece found by archaeologists. In the grave, it lay at the temple, so it was either an earring (a single one, there were no matching pair) or a temple ring or hair adornment (interwoven into a braid). 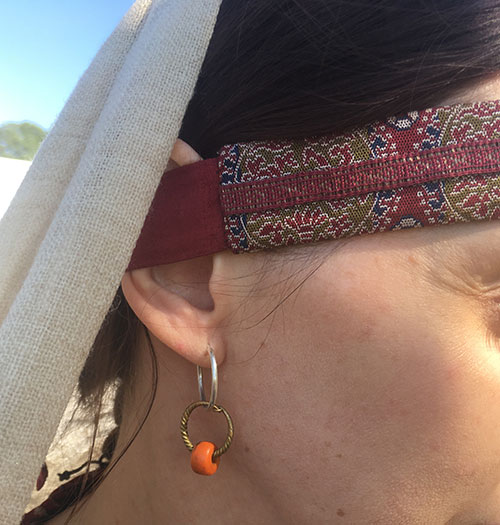 The typical headdress among women in Kyivan Rus’ was a white wimple or veil that covered the head. Often, it was complemented with a special hand-woven ribbon worn around the forehead. Some ribbons were simpler, others were embellished with elaborate patterns made with colorful thread or even thin silver wire. And such ribbons were very expensive. Ordinary women wore ribbons woven from woolen thread.

Besides other accessories, practically every woman (and certainly every man) in Kyivan Rus’ carried a small knife attached to her belt. It was an extremely useful thing, without which you couldn’t cope with everyday chores and couldn’t protect yourself from multiple dangers. Even noble females carried a knife at the belt, though, sure, they didn’t need to skin animals or cut ropes. And by the way, a good knife wasn’t cheap, it equaled at least 3 g of silver or one medieval dirham coin.

Modern replica of small knife worn at the belt 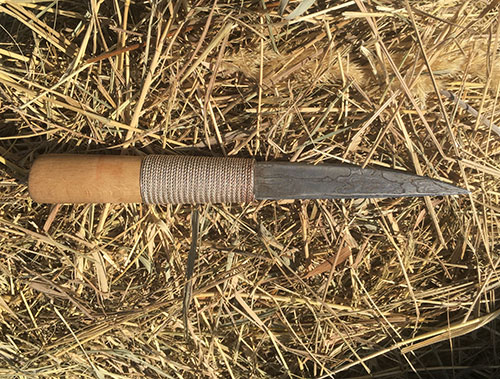 Another replica of knife, costly and elaborate piece

The legs of rich women were protected from the cold with the help of knitted (the technique is called “naalbinding” or “needle-binding”) socks and soft leather shoes. 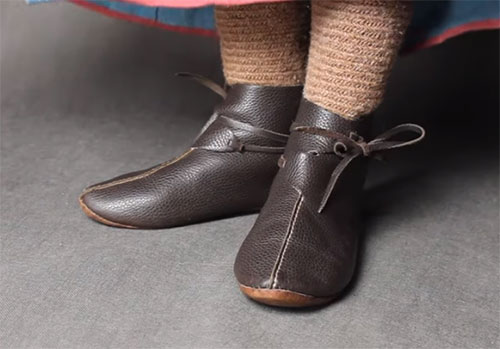