In the mid-18th – early 19th century, one particular women’s outer garment was very fashionable and could be found in practically any fashionista’s wardrobe. Its silhouette was cute and feminine thanks to a fitted waist and a charming peplum. It looked especially nice worn over a corset, accentuating a tiny waist and flaring hips. And this outerwear is called a “caraco”. Let’s look at it, and also, let’s try to solve the confusion regarding the caraco, pierrot, casaquin, and other almost identical jackets of the time.

This lovely outer garment called “caraco” and used by ladies of any status and wealth first appeared in France around the 1760s. And they derived from female working-class jackets. But caraco jackets often were much more elaborate and good-looking, so they quickly gained popularity and spread throughout Western Europe.

The typical features of a caraco are thigh-length, a peplum (flaring overskirt draped over an actual skirt), a stomacher or some other front panel (because a caraco is open at the front), and tight three-quarter or long sleeves. The caraco usually doesn’t have any buttons or fastenings, it is simply open at the front, and in most cases, the flaps are pinned to a stomacher, a decorative corset underneath, or a comperes front (a false front made to look like a stomacher). Only English caraco jackets were usually closed at the front. 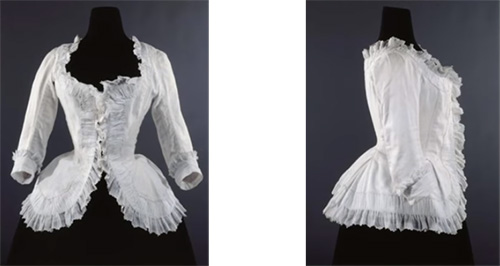 Of course, there were different designs of a caraco that varied a little. For example, it could be fitted to the body or it could have pleats hanging from the shoulder, like a sack back (though, the latter style is often called “pet en l'ier jacket” instead of caraco). The peplum could be shorter and simpler or longer and with more fabric draped in pleats. The sleeves sometimes were long, tight, and plain or they could be decorative, with a lot of embellishments, and with flounces. 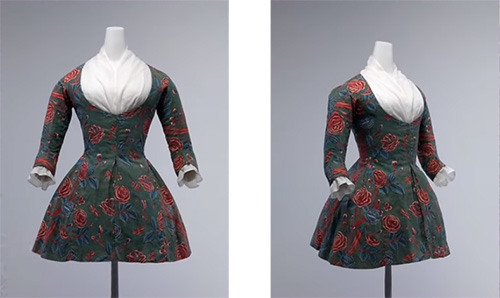 Dutch cotton caraco, the 2nd half of the 18th century. It is from The Met Museum

The typical material for a caraco was linen or cotton fabric. If to talk about the color palette and prints, there was a huge diversity of available options – plain fabric of different shades, floral prints, stripes, etc. A caraco usually differed in color and decorations from the skirt, but some were made to match the skirt they were worn with, to create the suit effect. 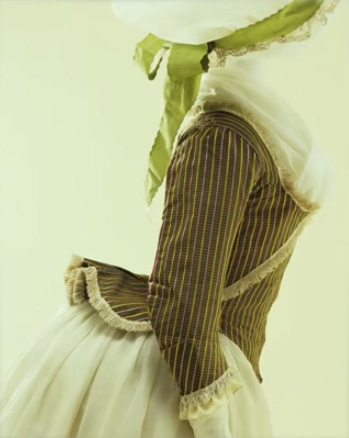 Some fashion historians and just vintage fashion lovers consider the caraco jacket to be a collective name for a number of period jackets of similar style – a caraco jacket, a pierrot jacket, a casaquin jacket, a pet en l'ier jacket, etc. There are some tiny differences in their design but, basically, they are pretty much the same garment. 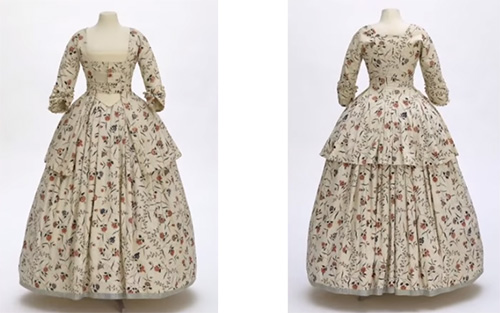 Matching caraco and petticoat from the V&A Museum in London. This British-made gown is constructed from cotton and dates 1770-1780