The Napoleonic Wars period (1803-1815) brought significant changes to European fashion. There appeared a few quite amusing new trends in clothing and accessories, and that’s exactly what we’re going to talk about in this article. After 1815, Empire-style clothes were gradually exchanged for Gothic and Romantic fashion styles. But such transitional periods are usually the most interesting in the history of fashion.

At first, the silhouette remained without change. But there appeared some peculiarities and new tendencies in tailoring the clothes. For example, double-layer dresses with the top layer made from silk net. This silk net was one of the latest inventions of the time. The manufacturing of this material began in 1809 when a specific loom was invented. So, the silk net became extremely popular because of its availability. 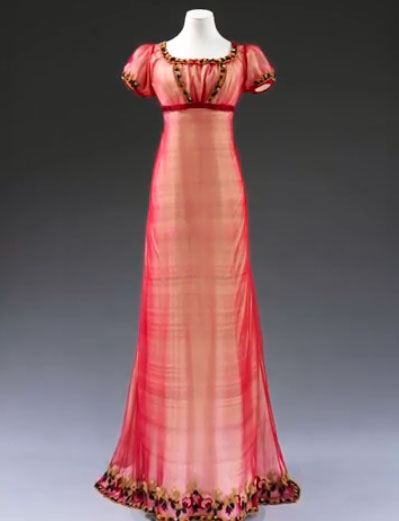 The silk net was hand-embroidered to add some chic. Of course, it was a rather complicated task to embroider on such sheer fabrics. 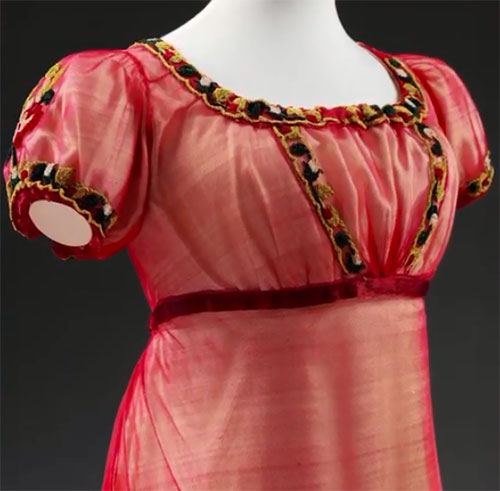 Another trendy thing in the Napoleonic Wars period were military-style decorations. Life revolved around war at the time, and soldiers’ uniforms were seen everywhere, so tailors and designers started to get inspiration from these military uniforms. They added military-style embellishments to gentlemen’s and even ladies’ outfits.

Here’s just one example of this trend. 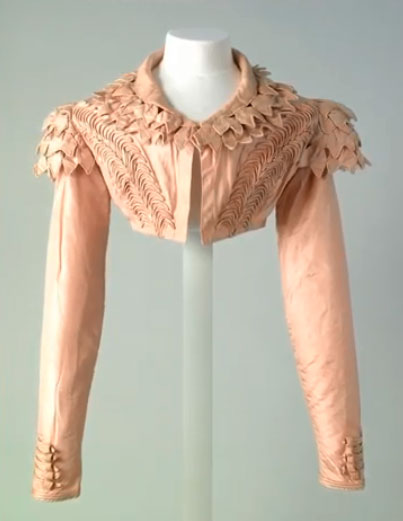 Silk spencer with military-style embellishments from Chertsey Museum. It is dated 1815

Note the amount of handiwork put into creating this spencer. 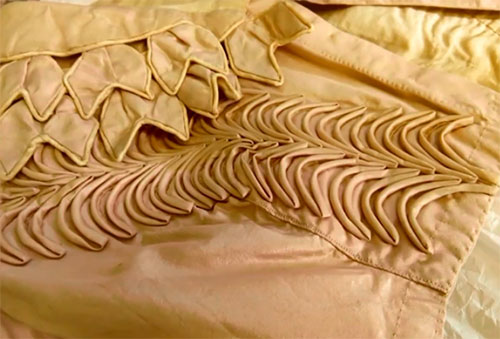 By the way, there is a curious legend connected with the invention of this garment. It is called a “spencer” after George Spencer who, supposedly, got the flaps of his tailcoat burned while he was taking a nap at the fireplace, so he just cut them off, which left a short jacket. This playful short outer garment quickly became the favorite outerwear of many court ladies.

Similar military-style decorations can be seen on other outerwear of the Napoleonic Wars period women. They used coats and pelisses in the same design as spencers but longer, and these garments also were adorned with chest details inspired by hussar uniforms.

Around 1815, noblewomen often wore ruff-collars. They were inspired by previous historic periods and their fashion trends. Though, early-19th-century ruff-collars weren’t as stiff as Queen Elisabeth I’s collars. They were softer and more natural multi-layered collars, and besides, they were attached to a chemisette worn over a dress. 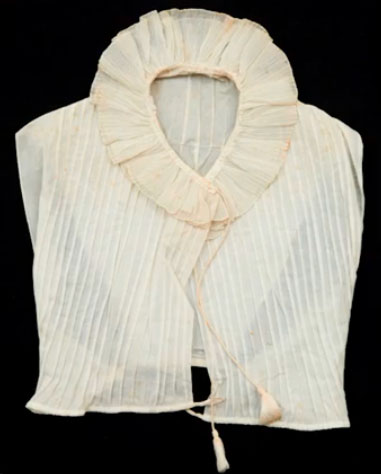 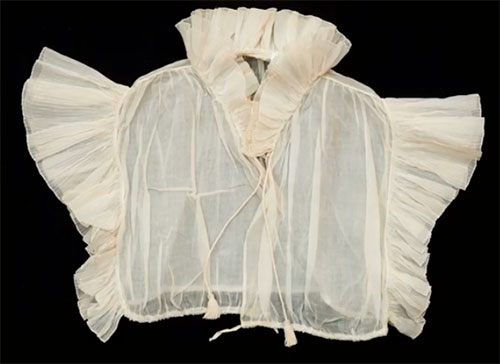 This style of handbag was extremely popular in the Napoleonic Wars era. Ridicules were tiny knit purses carried attached to a wrist. There was a great variety of such bags of different designs, colors, shapes, and sizes. Often, they were handmade from a net – nets were popular not only in dresses. A lot of women created their ridicules themselves, using netting techniques, crochet, knitting, and other methods. 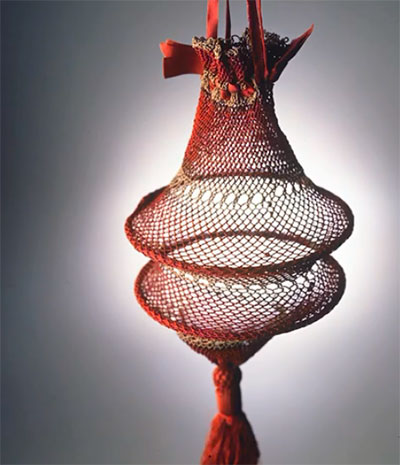 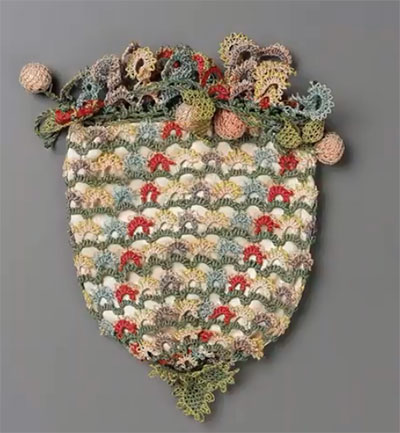 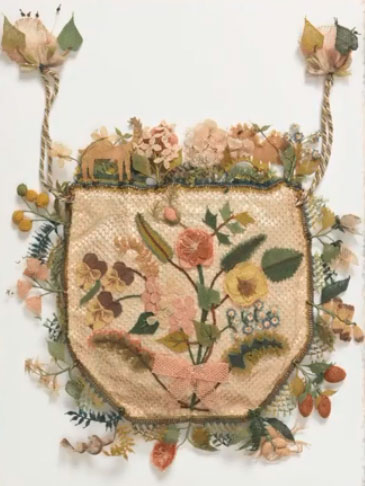 Gloves were a must-have in the early 19th century. They were made from various materials, including a net, fine fabric, and crocheted or knitted gloves. But the most favored and costly gloves were finest, very thin leather “limerick gloves” manufactured from so-called “chicken skin”. In reality, of course, this leather had nothing to do with birds. People made these gloves from unborn calf skin.

Here’s an interesting fact to distract you from sad thoughts. Once upon a time, people tried to make gloves from real chicken skin but no one wanted to wear them because of the holes where feathers had been. So, lucky chicks were saved from being used as gloves material.

Ladies wore gloves everywhere – to a ball, a picnic, a walk, a visit, etc. And the appearance of this accessory could be diverse. There were long and short, leather and net, simple and ornate, everyday and festive gloves.

Another must-have accessory of a lady at the time was a hat. They were made from various materials as well, had different designs, shapes, and sizes. Usually, ladies bought ready-made hats or bought a basic headdress and decorated it themselves. The most popular materials were straw and wood chips. Very often, the brims of the early 1800s bonnets were stiff, knitted from straw, and the top was soft, made from the fabric. 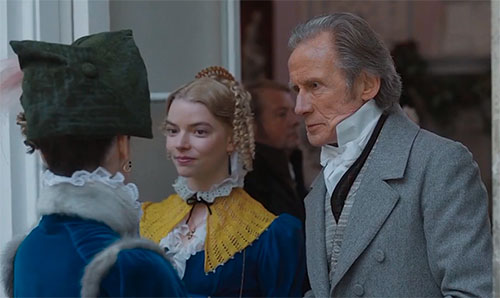 Men also got a few curious fashion trends in this era. For instance, they wore 2 or even more vests at a time, one on top of the other. And each waistcoat peaked from underneath the top one. 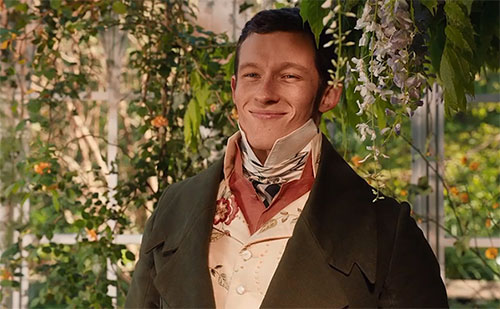