In the 1600s and 1700s in Europe, the fashionable female silhouette looked rather odd for a modern observer. The ladies wore skirts that extended far to the side but were practically flat at the front and back, sort of like a squashed cylinder. This shape was not too comfortable for daily use, but who would argue with fashion trends?! And also, there was one particular super important advantage of such a shape. What was it?

The dresses and skirts used by the noblewomen had a very unique shape. They were narrow in the direction front-back (practically natural width) and wide, sometimes extremely wide, in the side-to-side direction. Such a style of female garments wasn’t really comfortable – the width was often in the way when a lady walked or did some chores. Granted, they still could walk through doorways sideways, which was a good thing. But far not everybody wanted to do that, so some wealthy families in the 18th century had their doorways widened so that women in large panniers could squeeze through? Of course, not every family could afford it. But we still can find authentic 18th-century buildings with wider doorways – and that’s why they are like that.

How did women achieve this strange shape of a skirt? Obviously, they wore a specific underwear item underneath. It was called a “pannier” and it had a complicated construction. The frame was created from reeds or very thin pieces of wood, for example, balsa wood. Sometimes, the reeds or the wood were covered in linen or the entire thing could be covered with fabric.

By the way, the name “panniers” comes from a wicker basket slung on either side of a pack animal. Similar to that, the pannier frame was woven from wood.

The panniers first came into fashion in European courts in the 17th century. Fashion historians still argue what country exactly gave us this style of a dress. It might be Spain, England, or Germany. For instance, there are English outfits from around 1710 sporting this silhouette. Later, it reached France and became the most fashionable style of its time.

By the mid-18th century, a female silhouette was as wide as 3 men. That’s how wide those panniers were! Women were eye-catching all-right in them. 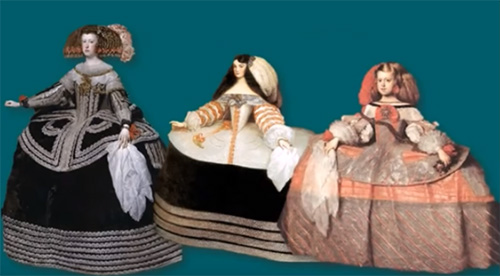 What for did the 17th- and 18th-century women use such a weird shape of a skirt? Were they simply looking for something fresh and new? Or was this shape dictated by the period’s admiration by “child-bearing hips”?

Actually, no and no. There was a certain reason to a pannier skirt. The thing is, at the time, fabrics used by the rich noble people were highly expensive. All those brocades and silks with prints and embroidery! When you pay a small fortune for the fabric, you want it to become the star of your attire, to be visible for everybody. So, tailors invented the side hoops shape so that there was a large flat surface at the front and back, and the patterns on the fabric caught the eye easily and could be observed by the people around the wearer.

Luckily, we don’t wear pannier underwear today, but this style of ladies’ outfits remains unique and charming in its own way. 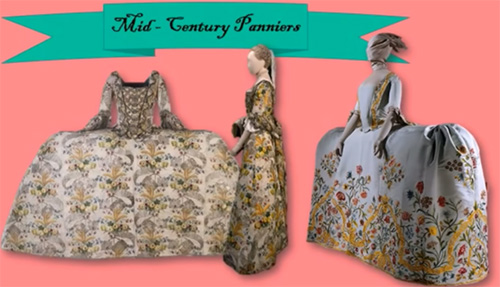