Tailcoats were a very popular garment among the 19th-century gentlemen. So much so that we have a large pile of information about them and a number of vintage examples that survived to our day and can be seen in museums, private collections, exhibitions, photos, and various other sources. And no surprise there – a tailcoat looks elegant and regal, it adds a lot of grace to the posture of any man (at least when we’re talking about evening tailcoats). So, what’s so special about the cut, style, decorations of a tailcoat? What fabrics were used to make it in the early 1800s? And how did the design changed throughout the years?

The first tailcoats appeared in the second part of the 18th century. Their cut was rather simple and the look was far from the sophistication of a 19th-century tailcoat. Throughout the end of the 1700s and the beginning of the 1800s, the cut and some features of a tailcoat changed, but the main conception remained the same.

At the same time, the popularity of this garment allowed the creativity and diversity of the tailcoat’s appearance. Various examples could be slightly different and the more charming because of it. For instance, some tailcoats were ultra-short for a men’s clothing article. They barely reached the waist, which allowed to show off an ornate waistcoat underneath. 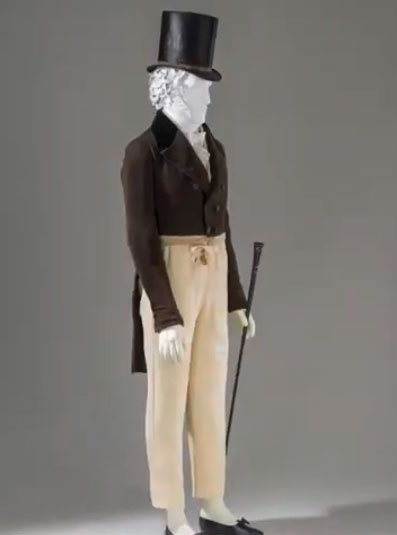 Short tailcoat with waistcoat peeking from underneath it

The late-18th-century tailcoats had rolled-up cuffs. In the 19th century, the cuffs became sewn to the sleeve and decorative rather than functional.

The pockets in tailcoats were usually put at the back, which is logical – there’s simply no room for them at the sides or front of a garment. Also, the pockets could be hidden in the back pleats of folds of a tailcoat. Another option was to place them inside of a tailcoat, in the lining.

The lining of a tailcoat, by the way, was very different from what we’re used to today. The lining didn’t cover the whole inner surface – the folds and almost all of the back usually didn’t have lining, only the front and partially sides were typically lined or quilted.

19th-century tailcoat and its sewing pattern

Day tailcoats were cut a bit loose in the shoulder area, because of which the garment sat somewhat baggy. But it was more comfortable and didn’t restrict movements too much. Evening tailcoats were tighter and, obviously, more ornate. They often were adorned with gold-plated buttons, while morning and day tailcoats had fabric-covered buttons.

The best fabrics for tailcoats were matte fabrics. Glossy and shiny cloth wasn’t suitable and fashionable. Among dandies, there even was a fashionable trend to age fabric so that it looked a bit worn down, but not too much. They used sand or other abrasive materials to accomplish the task.

Most often, tailcoats were sewn from fine woolen fabric. Also, thin felted cloth could be used – this allowed a tailor to leave the edges of a collar without any trim or finishing (especially important it was with collars that had a complicated shape). 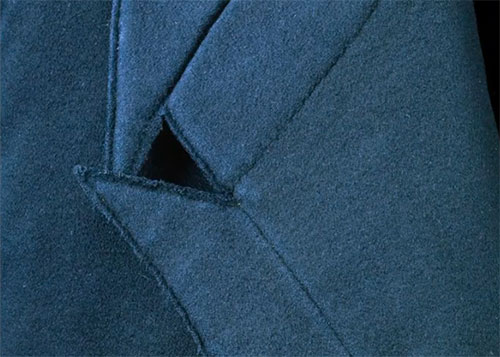 The collar of an evening tailcoat could be decorated with velvet. But there were practically no other decorative embellishments, except for buttons.

There existed summer tailcoats worn in the country, in the rural areas. They were usually made from plain and light-colored linen cloth, but sort of tweed-patterned examples also could be found.

The cut of a tailcoat familiar to us, close to the modern tailcoats, appeared around the 1820s.