In the 1700s, women dressed rather modestly and very doll-like. Particularly in the 1730s and 1740s, they looked like pretty human-sized dolls. One of the loveliest female accessories invented in Europe in the 18th century was a kerchief or delicate shawl called “fichu”. It covered women’s low neckline but in a very intriguing way, as fichus often were made from delicate semi-transparent lace. This cute accessory quickly gained popularity and was favored by women for years and years after.

A fichu is a large, often square kerchief or shawl worn thrown over the shoulders. The fabric was folded diagonally into a triangle and put around the shoulders. It covered women’s low neckline and partially shoulders and neck. A fichu was typically tucked into the neckline of a bodice or dress. Also, it could be tied or pinned (sometimes with elaborate decorative brooches) at the front.

One of the curious ways of draping a fichu was to cross the ends at the front so that the left end was tucked into the right side of the chest and vice versa – this created a nice look. Such cross-over fichus sometimes were so long that the ends weren’t tucked but extended all the way to the back and were tied there.

Two vintage fichus. The Italian lace fichu on the left comes from The Met and dates between the 18th and 19th centuries, while the British fichu on the right is from the V&A and it's made of cotton and dates the third quarter of the 18th century

The design of a fichu could be rather diverse. Some of them were large and covered a big part of the back as well – they looked more like a shawl than a neckerchief. Others were small and delicate and covered only the decolletage and a small part of the neck and shoulders. There were simple white linen fichus and ornate lace fichus with a lot of decoration. The size, shape, and adornments could be so different, which made this accessory even more widespread, as women were able to be creative with it. 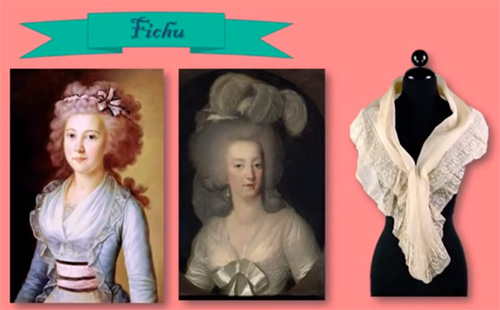 Usually, fichus were delicate and sophisticated accessories. Most often, they were made of fine lace or at least decorated with a lace border. Sometimes, the fabric was embellished with embroidery. So, a fichu was an extremely beautiful and stylish piece of the female wardrobe.

It is believed that a fichu originates from 18th-century England. This accessory was highly popular among British, French, and American women throughout the 18th and 19th centuries. Of course, during this long period of time, fichus changed and altered according to fashion trends and ladies’ tastes in clothing. But no matter what historical period was it, a fichu always looked elegant and stylish. It added a vibe of sophistication to women and intrigued men by the sheer fabric and cute embellishments. 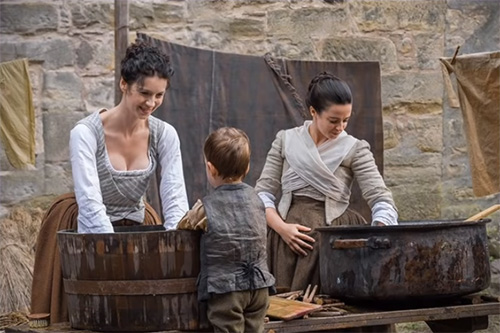