Vikings used a wide variety of brooches called “fibula” in their outfits. Such jewelry items were used instead of buttons, hooks, and zippers, which weren’t invented yet. And some of these fibulae are works of art, real masterpieces that impress us even today. Among them are so-called “tortoise fibulae” or “turtle brooches” or “oval fibulae” – large and intricately designed brooches worn by Scandinavian women.

The tortoise fibulae were always worn to fasten a Viking suspended dress called “hangerock” at the front. They kept shoulder straps in place and fastened them to the body of a dress. So, women proudly wore turtle brooches on their chest, just above the breasts, where these jewels were showed off the most.

The most interesting and beautiful thing about turtle brooches is their ornamentation. The whole front surface of these jewelry pieces was covered with patterns, ornaments, and décor. And these patterns were usually 3-dimensional, which added even more to their appeal. 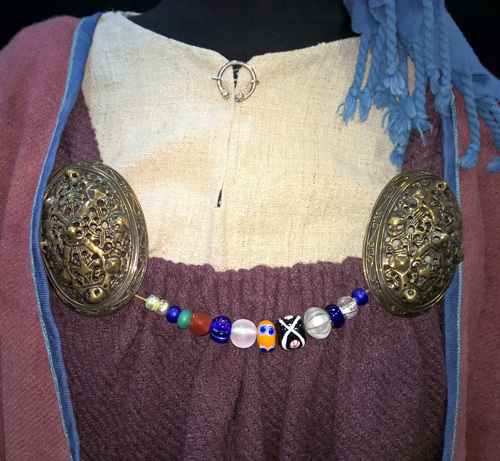 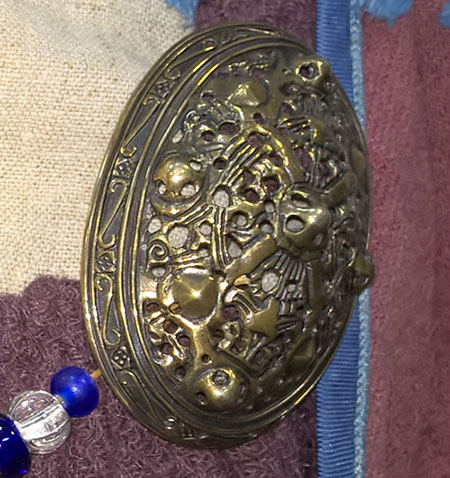 At the back bottom part, fibulae had special tiny hooks used to hang a string or several strings of beads. These beads looked like a necklace but didn’t cause any discomfort as they didn’t touch the skin of the neck (women who’ve ever worn heavy beaded necklaces know how uncomfortable it can be).

As such fibulae were usually made from bronze, a pretty solid and durable metal, Scandinavian jewelry makers put all their skill into creating elaborate patterns during the casting of bronze. And also, oval fibulae were really durable and could be used for years and years without any trace of wear. Some examples even survived under the ground and were found by archaeologists thousands of years after they were shining of their owner’s chest.

Here are two original Scandinavian tortoise fibulae and one triangular fibula exhibited in one of the archaeological museums in Ukraine. They were found at one of the archaeological sites and are dated the Kyivan Rus’ period (the 9th-13th century). Of course, some damage is seen on their surface, but we still can admire the intricacy of their design. And, by the way, each fibula is made in a unique design, so they’re not a pair. 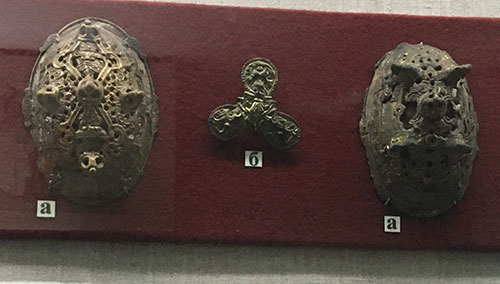 Vikings knew a lot about practical jewelry items that were both good-looking and useful. Any woman – even today, not to mention the 8th-11th century – would be proud and delighted to wear skillfully made turtle brooches made from shining bronze or silver. And the jewelers of that period managed to create masterpieces we still admire. Today, many jewelry makers, especially people who are fond of historical reconstruction, produce lovely modern replicas of Viking oval fibulae.