Dandy fashion in the 19th century. What crazy trends did they invent?

Dandyism is a fascinating fashion style, the popularity of which in Europe came in the late 18th – early 19th century. British and French gentlemen were especially fond of this trend. We can talk for hours about the pretty features of dandyism, with its high-quality clothes, elaborate accessories, well-groomed skin, hair, and nails, etc. But in this article, we’d like to raise another topic – bizarre and crazy peculiarities of dandy fashion. What pieces of dandy outfits looked ridiculous? And to what extremities some gentlemen went in their desire to be fashionable and copy their icon’s appearance?

In the late 18th – early 19th century in Great Britain, a new fashion trend called “dandyism” became widespread. This trend was based on extremely polished appearance of a person and self-absorption. The model dandy man of the period was Beau Brummell, whose popularity and authority among British gentlemen was unbelievable.

If to talk about the main features of dandy fashion, they were well-groomed look (clothes, hair, body – everything), perfectly fit garments, fine costly fabrics, lace ruffles, gold embroidery, high cravats, exquisite accessories, shining boots, etc. Dandies wanted to look absolutely perfect and extravagant and spent fortunes on their clothes and, especially, accessories. And very often, they lost all their riches and became bankrupt because they spent too much on clothes and fancy looks. 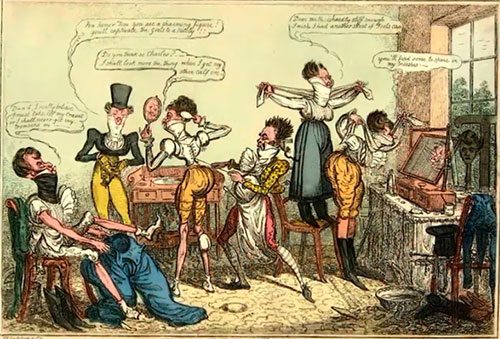 Fun fact about one dandy and milk! At some point, the citizens of London stopped buying milk on the city markets and preferred to deliver it straight from village farmers. Why? Because Beau Brummell loved to have milk baths to make his skin softer and whiter. But, the rumor had it, the milk he used not always was utilized and often returned to the markets. Since no one wanted to drink milk, in which a man had bathed, Londoners became extremely careful with where they bought this delicious fluid.

But except for all the mentioned typical features of the dandy fashion trend, there were a whole lot of weird and crazy things about a dandy appearance. And we can see them on famous caricatures of British illustrator George Cruikshank, whose caricatures of various weird fashion trends are among the best in the world. 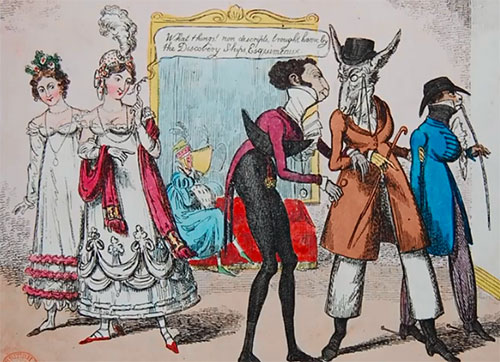 So, what strange and highly exaggerated features of clothing do we see in Cruikshank’s drawings?

Male corsets. There are so many caricatures of men’s corsets that we can definitely say that this innovation shocked people in the 19th century. A corset or stays, a totally feminine garment, was often used by dandies who weren’t slim and slender enough.

High collars and neckties that sometimes covered the ears of men. These collars were stiffened with paper frames, wire, and even whalebone. Cravats were starched to accomplish the same effect. There is even a story about one dandy who cut his skin by the edge of his neckerchief.

Fake muscles. These were bizarre accessories. The dandy’s underwear could be equipped with special pads enhancing shoulders, thighs, shins, and/or buttocks. Even women didn’t use such a wide arsenal of tricks to enhance their figure! 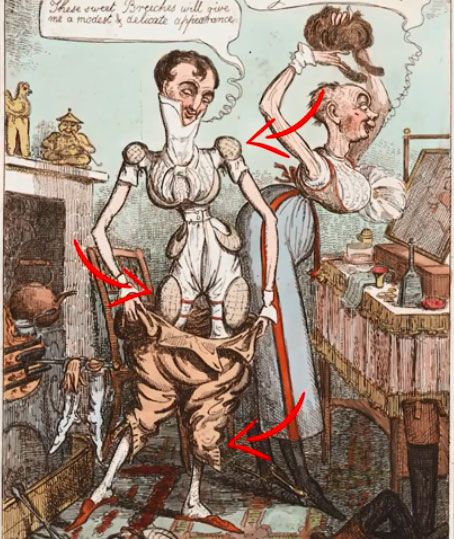 Too tight breeches. There were several widespread styles of trousers worn by dandies. And one of them was very tight-fitting breeches or pants that accentuated every curve and were like the second skin. Also, they looked awful on plump men.

Baggy pants called “a la Cossack”. This is another odd garment for the 1800s. These wide trousers came into fashion after the visit of Russian tsar and his military men to London. Those troops wore baggy trousers and were called “Cossacks”, hence the name and design. Though, baggy pants quickly were modified and transformed into a new style of trousers, with narrower pant legs.

Of course, all these mentioned garments and peculiarities are extremities. Far not every dandy looked ridiculous. A lot of them appeared totally appealing and handsome. But there always are people who go to extremities and can’t stop in time in their desire to follow some fashion trend or style. And some dandies were like that, too.