These very feminine-looking coats actually derived from military uniforms, particularly from fur-trimmed jackets worn by the 17th-century hussar mercenaries of Hungary. But women can be really imaginative with their attire, so these military garments were restyled with time and cute pelisse coats were created. This outerwear was extremely fashionable in the Regency/Empire era (beginning of the 19th century). Even today, we can find examples of similarly-cut female coats and raincoats used by modern ladies.

The pelisse coat appeared in early-19th-century Europe. This garment originates from the uniform of the 17th-century hussar mercenaries from Hungary. It was a pretty common thing to re-imagine and take inspiration from military clothing. It happened all the time. And the pelisse wasn’t exception.

By the way, the original jackets of hussar mercenaries were ornate and opulent. They were short, trimmed with fur, and worn thrown over the left shoulder of a soldier to protect the body from sword cuts. 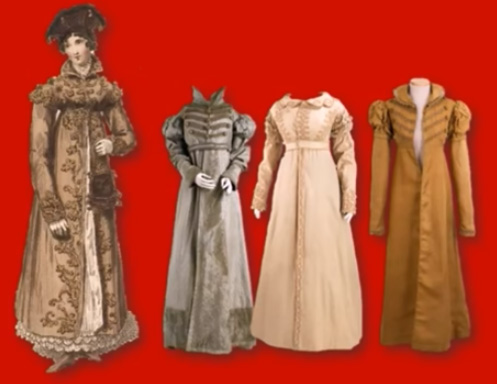 Though, the cut and design of a pelisse coat were totally feminine. It had a high Empire-waist, ankle-length, and long sleeves (usually fitting, but wider leg-o-mutton sleeves could also be seen). The bodice was close-fitted and the skirt also rather narrow.

Pelisses were usually beautifully adorned with braid trim, embroidery, rows of buttons, pleating and frills, velvet trimming, and other decorations. But the amount of such embellishments was, as a rule, restrained so that the garment looked tasteful, sophisticated, and not overwhelmed with decor. Often, the design of a pellise was similar in appearance to those hussar jackets that had inspired the tailors. Those original jackets were trimmed with fur, braid trim, and frog fastenings, so women’s pelisse coats also got some of these adornments. 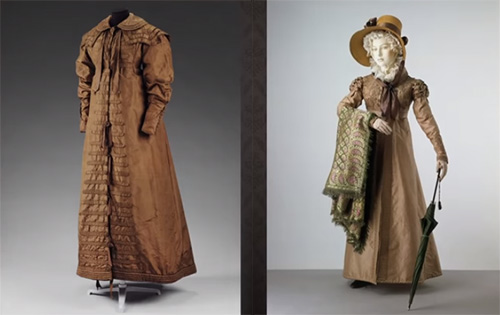 English pelisse coats from the V&A in London. On the left, is a pelisse coat and collar made from brown silk taffeta from about 1818; on the right, is a silk pelisse that's lined with silk satin and cotton, and it's made circa 1820

The pelisse coats were made in the traditional Empire style. The silhouette they created was feminine and delicate. So, women liked them a lot and these outer garments became very popular. This same cut is sometimes seen in outerwear even today, as it can easily be modernized and suits many different body shapes.