How Medieval and Renaissance clothing was made. Bonus – tailor’s tools

In the Middle Ages and Renaissance era, there was no mass market of clothing, which we have now. People made every garment individually and by hand. Some sewed their outfits by themselves, others hired professional tailors to do it. But such work wasn’t easy at all. To confirm this thought, here are 5 steps a person needed to take in the process of sewing any garment. Also, we’ve made a list of sewing tools every medieval or renaissance tailor used in his work.

The fabric was very expensive at the time, much more so than today. That’s because all the fabric was handmade from natural materials. If to take linen, cotton, or hemp, you had to grow a plant, gather the material, make certain manipulations to turn it into threads, and spin and weave the threads into cloth. With wool, silk, leather, or fur, you had to raise an animal, get the material, turn it into threads, and spin and weave them into cloth. Anyway, it was rather long-lasting and labor-intensive work. 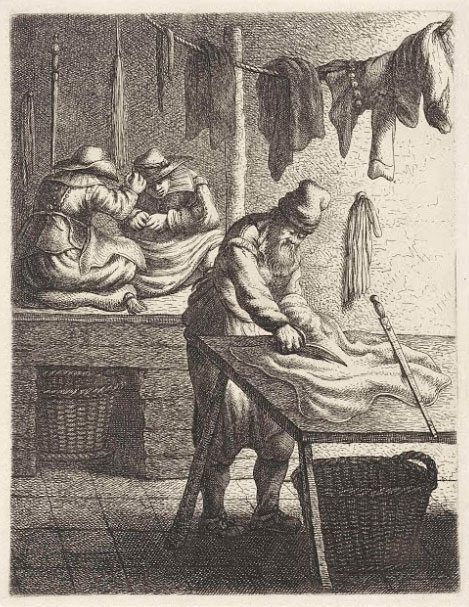 Jan Georg van Vliet, Kleermaker, 1635, etching on paper. You can see men sewing sitting on the table with their legs crossed. One yard is on the table and another one hangs on the wall; textile waste baskets are under the tables

Costly fabric meant that ordinary people seldom sewed clothing and tried to use as little of cloth as they possibly could. Even wealthy noblemen and royalty used some tricks to save on the fabric. For example, the visible part of a garment was made from expensive fabric (silk, brocade, cotton – the latter was expensive in Europe because it was imported from Asia) and hidden parts were sewn from simpler and cheaper cloth (like linen).

The picking of the fabric for an outfit was not an easy task. Experienced tailors knew how to choose the right one and, even more importantly, get the right amount of it. By the way, often, certain types of fabric were status things and could be used only by aristocracy. There was a whole system of yeses and nos as to what fabric one could use. And a good tailor was highly estimated for his knowledge in this sphere.

When the fabric is chosen and purchased, another important task has to be done. Of course, one needed to take measurements before sewing any piece of clothes. But how did they do this? Take into consideration that there was no tape measure in the Middle Ages and Renaissance period.

People used strips of parchment instead of a tape measure or centimeter tape. They used these strips to measure the body of a person and made notes on it to remember which measurement it represented.

The professional tailors also used a wooden or metal rail with divisions marked on it. It was called “ell” or “yard”. Sure, it was an extremely handy thing for any tailor.

In most cases, especially when sewing from costly fabric, tailors used sewing patterns before starting to work directly with the cloth. They used the mentioned ell or yard to transfer the measurements on paper and, afterwards, on the fabric. Coarse brown paper served perfectly for the sewing patterns. A good tailor knew well how to make various sewing patterns for a number of garments.

One could find the sewing patterns, fashionable cuts and designs, and other useful info in sewing books.

What material was used to make markings on the fabric? Both chalk and soap, popular today, were known and widely used in the Medieval and Renaissance era. These were for dark fabrics. Other options were coal, ink, and lead pencils – for light-colored fabrics. Note that some of these materials can’t be washed out.

When the sewing patterns were ready and the fabric was marked, it was time to cut the cloth. After that, unexpectedly, the tailor got on the table and started to work on sewing the piece together.

The last stage of making clothing is, obviously, sewing it into one piece. The tradition to work on the table with the legs crossed lasted long – up to the 20th century! Why did they do it? For one, it’s easier to use your knees when you’re working on a piece and your hands are already occupied. Also, you can use the knees to add a 3d shape to the sewed item. The third point is that your legs are kept warm, while you’re sitting for hours not moving. And doing it on the table is handy because you have a large flat surface with all the little things you might need at arm’s length.

What little things are they? What tools did a tailor use in the process of sewing?

But there was another significant item that belonged to a tailor – a basket with textile waste left after cutting the fabric. This basket was kept under the tailor’s table. It was a real treasure. Often, these leftovers were used for trimming, inserts, and other purposes, but a lot of cloth still went to “waste”. Tailors considered this textile waste their rightful property, which they used for their own needs, for example, to make some accessory or small piece of clothes. Sometimes, even chemises, doublets, and other full-fledged garments could be sewn from tiny pieces of fabric. Also, textile waste was used as patches.

One more tool of a tailor was the iron. It also was placed under the table or somewhere safe because it was hot when ready to work. People started to place hot coals into an iron only in the 18th century. And before that, it was placed on top of a special rack with hot coals in it. Or the iron was simply put into a hearth or fireplace to be heated.