Usually, we analyze civil historic clothing in our articles about stage costumes used in popular TV shows – ladies’ gowns, gentlemen’s suits, national costumes, historic accessories, and so on. But this material is dedicated to military uniforms. Let’s find out what historic military clothes inspired the costume designers of Star Wars to create the costumes of the Imperial Navy officers and Imperial Navy guards. What details do they have in common with some of the real-life uniforms? Were they really based on the Nazi uniforms?

This article is based on the video from YouTube channel “Costume CO”.

Both the Death Star troopers and the Imperial Navy officers are bad guys in Star Wars. So, their costumes had to be special.

Costume designer of Star Wars John Mollo said, “George [Lucas] made pronouncements of a general nature. First of all, he wanted the Imperial people to look efficient, totalitarian, fascist…”

Lucas told Mollo, “You've got a very difficult job here, because I don't want anyone to notice the costumes. They've got to look familiar, but not familiar at the same time”.

George Lucas wanted the costumes for the Death Star to have the military preciseness but to be natural, not designed.

By the way, John Mollo was a military expert. He wrote a few books on the subject and worked as a war film consultant. It’s only natural that he took inspiration for Star Wars movie costumes from real-life military uniforms.

The Imperial Navy, sometimes referred to as the Imperial Starfleet, was the naval branch of the Galactic Empire's military.

The naval officer’s service uniform worn by Grand Moff Tarkin, general Motti, and general Cassio Tagge, as we see them in the Death Star War room, is an olive-gray double-breasted tunic with matching trousers and tall black boots. 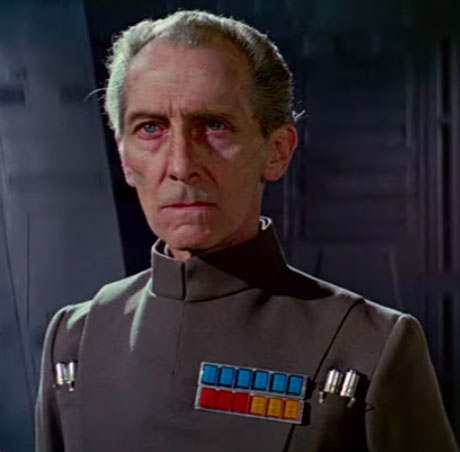 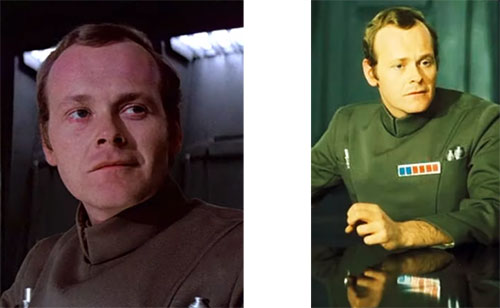 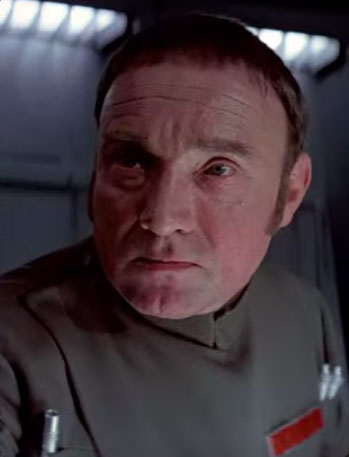 Peter Cushing (played Grand Moff Tarkin) found the boots that came with his costume extremely uncomfortable to wear because they were too small for his feet. So, he only wore them in a few shots, in which Tarkin's feet could be seen. In all other shots, Peter Cushing wore a pair of fuzzy slippers.

John Mollo based the final design of the Imperial officer uniforms not on Nazi attire but rather on the cavalry – to be precise, the Uhlan or light cavalry uniforms of the Imperial German army (the name given to the combined land and air forces of the German Empire of World War I). 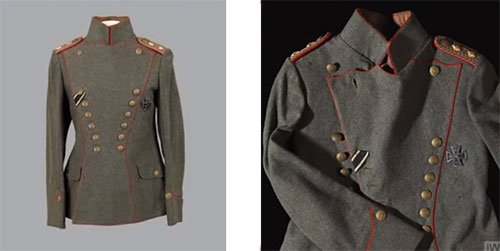 Tunic, 1910 Ulanka from the Imperial War Museum in London

The gray color was introduced in 1910. Before that, the German army wore uniforms of dark-blue.

The Waffenrock (coat of arms) 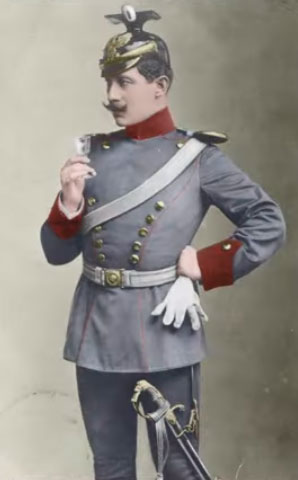 Here is an example of a reproduction World War I Imperial German fighter uniform. It actually looks a bit like a chauffeur uniform. This Ulanka tunic and breeches set are from The History Bunker Ltd. website.

Quite likely, one major reason for the use of the World War I uniforms in Star Wars, as opposed to those from the Second World War, was that most uniforms from the latter conflict featured open-collar jackets and neckties, whereas, in World War I, Mandarin collars were still very common.

The British army was the only major force of the war to have already adopted ties. 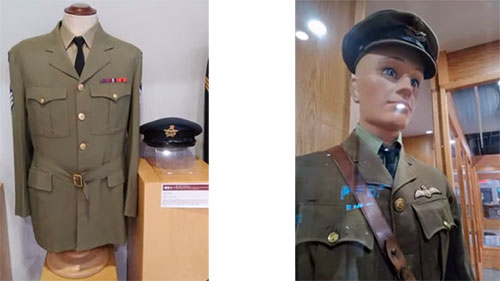 Mandarin collars are naturally timeless and suited for a futuristic fashion. But nothing screams 20th century like a four-in-hand tie.

One departure from the Uhlan uniforms is the lack of brass buttons on the plastron, cuffs, and tunic back vent. 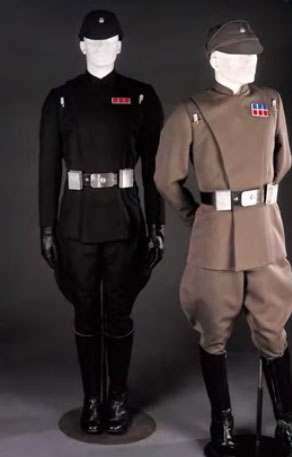 ATMachine said, “That was due to a dictate imposed by George Lucas: because the SW galaxy is, technologically speaking, in the future, no buttons or other visible fasteners of any kind should be visible on characters’ clothing. This is presumably one more idea George Lucas took from Gene Roddenberry, who issued similar instructions regarding the clothing to be worn on Star Trek”.

You might also have noticed that silver is the dominant metal of the Death Star uniforms, seen in the buckles and cylinders in the breast pockets of the officers. 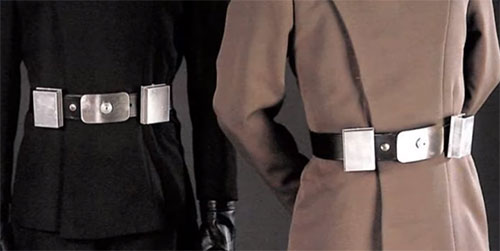 You will likely recall that Leia also wears silver and white, showing that she, like the Galactic Empire, is also part of the same technological world. 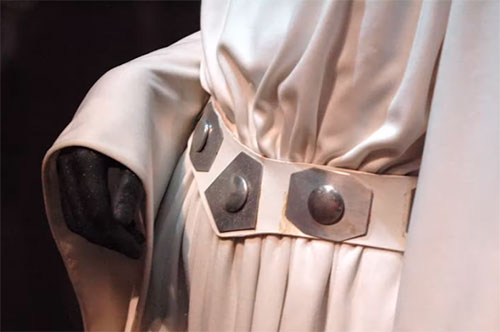 According to Bonhams Auctions, this Imperial commander’s jacket and trousers set from Star Wars 1977 are made from green-colored wool mix, the jacket being side-fastening, with pressed studs, with silk-effect lining. It was sold at the auction in 2007 for £9,000. 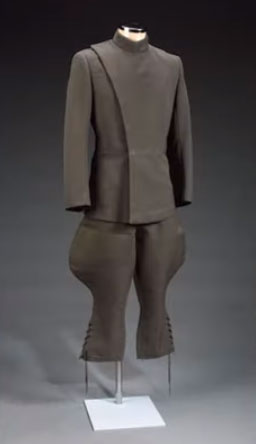 Here are Peter Cushing's jodhpurs with the original Bermans & Nathans label. These are owned by a private collector. 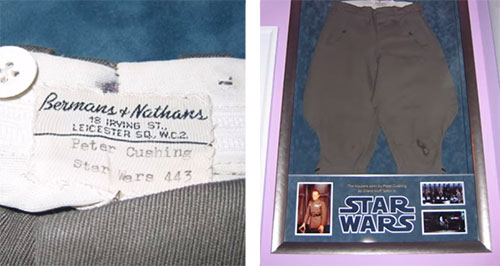 The olive-gray cap, like the one we see here on chief Moradmin Bast, was likely optional for senior officers. 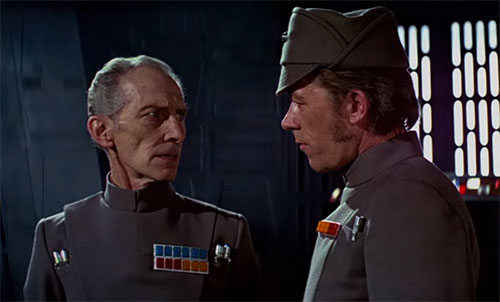 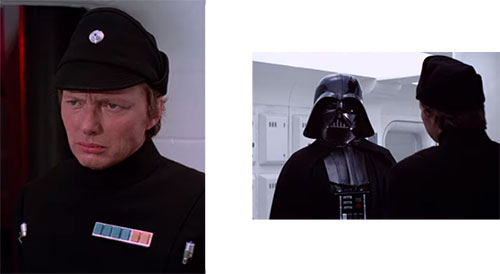 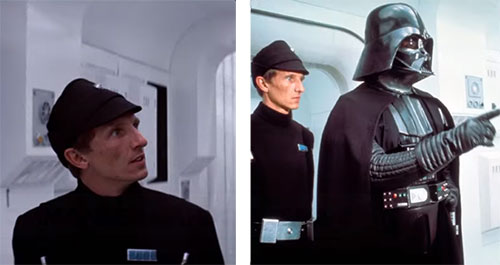 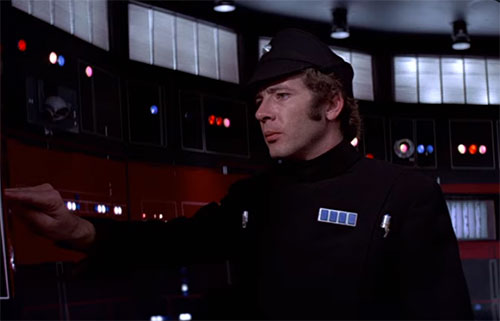 With the Imperial costumes, there are many examples of retroactive continuity. An example of retcon with the costumes is that the officer’s discs, also known as an identity disk, was an identification device used by the military of the Galactic Empire. 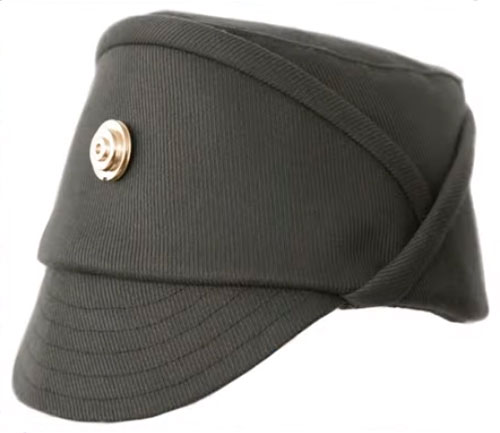 Here's an example of a World War I reproduction field cap aged by Warhats.com. The small button-type cockades were worn at the front of kepis and peaked caps. 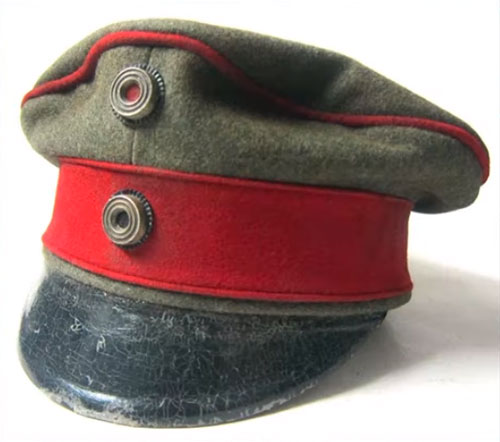 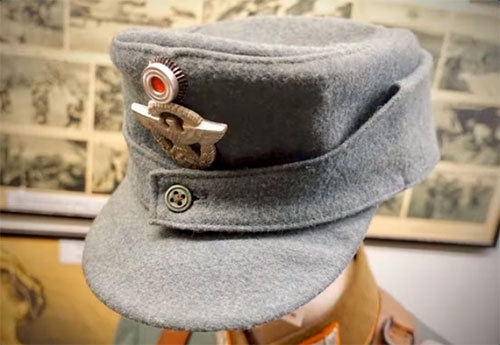 On the Death Star, captain Edmos Khurgee’s uniform features his rank badge made from what looked like Lawson's packages, along with silver cylinders worn on each side. 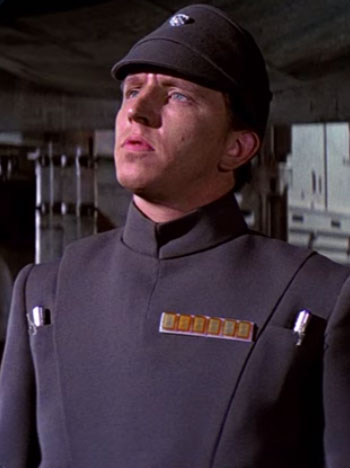 Possibly, these were inspired by Russian Cossack uniforms. The cylinders were worn in rows of small pockets on the breasts. 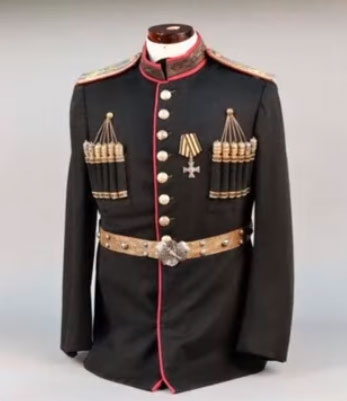 The cylinders themselves called “gaziri” are actually a tube with a bullet and a measure of gunpowder or a paper cartridge. 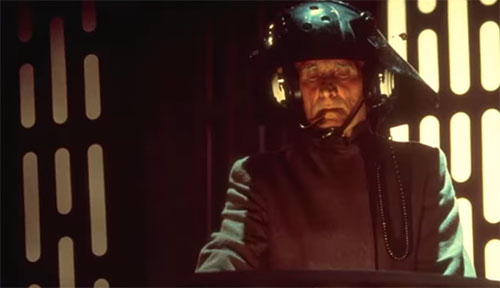 The helmet was possibly inspired by the Japanese kabuto and the lobster pot helmet. 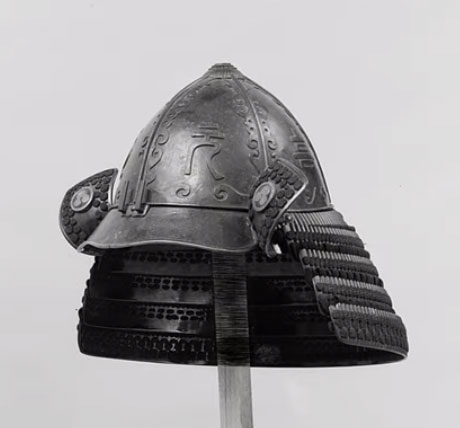 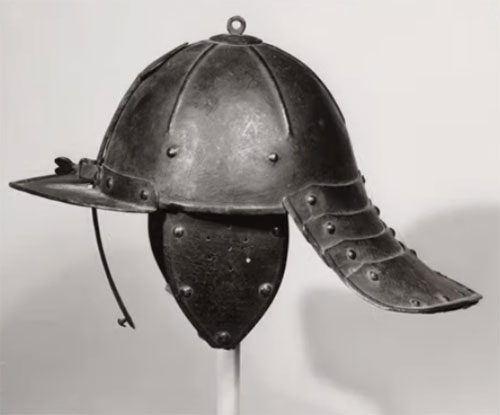 Star Wars Helmets stated that the black Imperial guard’s helmets, called “cheese graters” because of the holes in the helms, were made by Andrew Ainsworth at Shepperton Design Studios. It's believed that John Mollo originally commissioned 20 helmets but that more were actually produced. 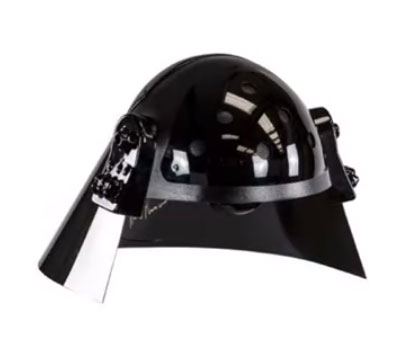 In later films, a visor could drop down in front of the eyes.

The rest of the uniform meanwhile, like we see on Death Star troopers sergeant major Enfield and corporal Grenwick, is similar to the Death Star officer uniforms but in solid black. 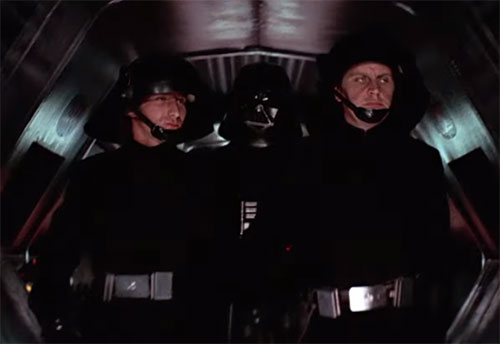 So, they have tunic and trousers, gauntlets, tall boots, and a belt with a silver buckle.

It's thought that they distinguished themselves from the other officers dressed in all of gray because of their membership to an elite force, separate from regular commands, akin to the US Marine Corps.

Here is another costume. Like the Death Star troopers, it's really the closed helmet that makes the costume. 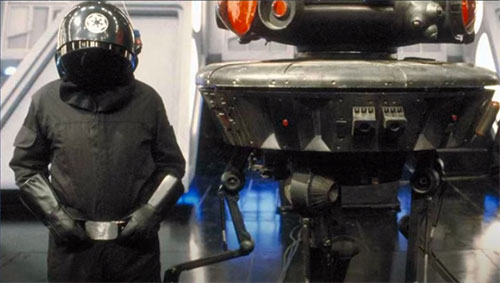 With simple black coveralls, gauntlets, and a belt. It's thought that 12 costumes were made in all.

And here’s the Galactic Empire insignia, which appeared on uniforms and helmets. 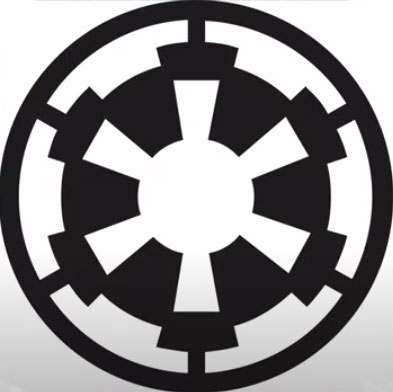 According to StarWars.com, the new cog with six spokes is associated with the might of the Empire, and its presence on a world signifies Imperial control.

The Star Wars symbols also share something in common with the Japanese family crests called “kamon” or just “mon”. Most mon designs consist of a roundel encircling a figure of plant, animal, man-made, natural or celestial objects, all abstracted to various degrees. Historically, each clan had a family crest of its own and these crests were widely displayed on war flags, armors, and helmets.

Here's an example of a mon crest on a kamishimo from the Met Museum. 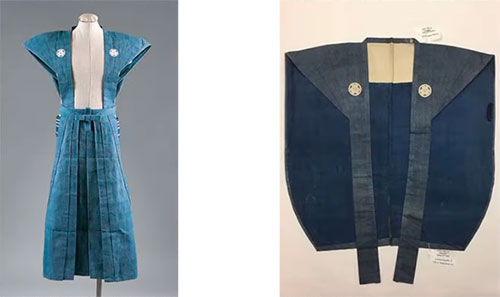 Death Star Gunners used another design of helmets, which might have been inspired by the German visored sallet. 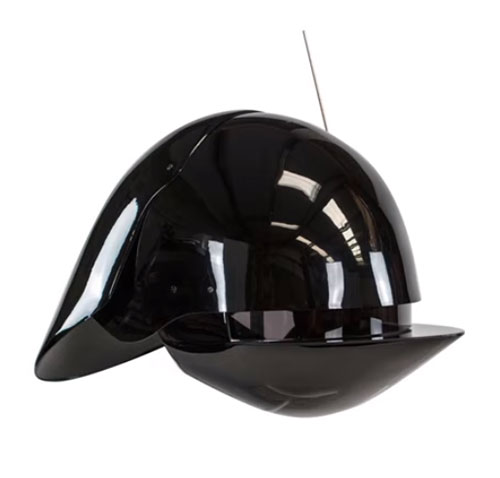